Investor still wants to renovate it

The fire began at about 2 a.m. at the former Howard Johnson Hotel near Interstate 435 and Front Street. The hotel opened as the Park Place Hotel, then changed to the Ramada Inn before closing as the Howard Johnson.

The Kansas City Fire Department has not yet said what started the fire.

Firefighters said they struggled to find working fire hydrants in the area, which delayed their ability to put water on the flames and may have helped the fire spread.

Earlier this year, the 41 Action News Investigators tracked down the owner of the property living out of the country.

See photos of the abandoned hotel by clicking on the image below. 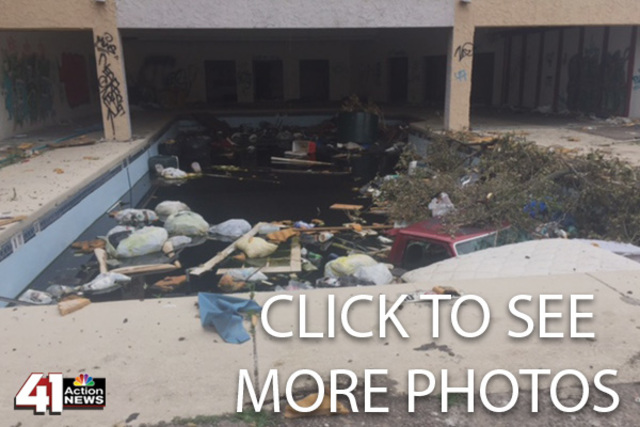 Despite the fire damage, a group of investors wants to buy and re-open the hotel.

Santosh Padhy told the 41 Action News Investigators he's part of a group of investors willing to put up $3 to $4 million to make it happen.

Earlier this year, the 41 Action News Investigators reported owner Andrew Marin abandoned the property with a lot of unpaid bills, including for Kansas City utilities.

Marin's real estate agent Bob Crow confirmed he's in ongoing negotiations with Padhy's group. But Crow said no deal has been reached yet.

Padhy said he will adjust his bid for the property downward due to the fire damage.

But it may not matter.

City leaders are planning to get bids at the beginning of the new year to demolish the hotel property at an expected cost to taxpayers of about $1.5 million.

Padhy said he can finalize terms to buy the property next month.

He said he's currently negotiating with city leaders to prevent them from demolishing the property.

"This is going to cost me a lot more than what I was expecting," Padhy said. "But I still don't want this building to be torn down to the ground."

The 41 Action News Investigators have been unable to reach Marin for comment.

Crow said Marin had two previous deals for the hotel property which included a partial hotel and apartment complex. But Crow said city leaders turned those plans down.

Crow believes if one of those proposals had been accepted, the property would be up and running now.

Kansas City spokesman Chris Hernandez said city leaders are committed to getting rid of the problems associated with the hotel property.

They include looting, vagrancy and the death of a man in an elevator shaft.