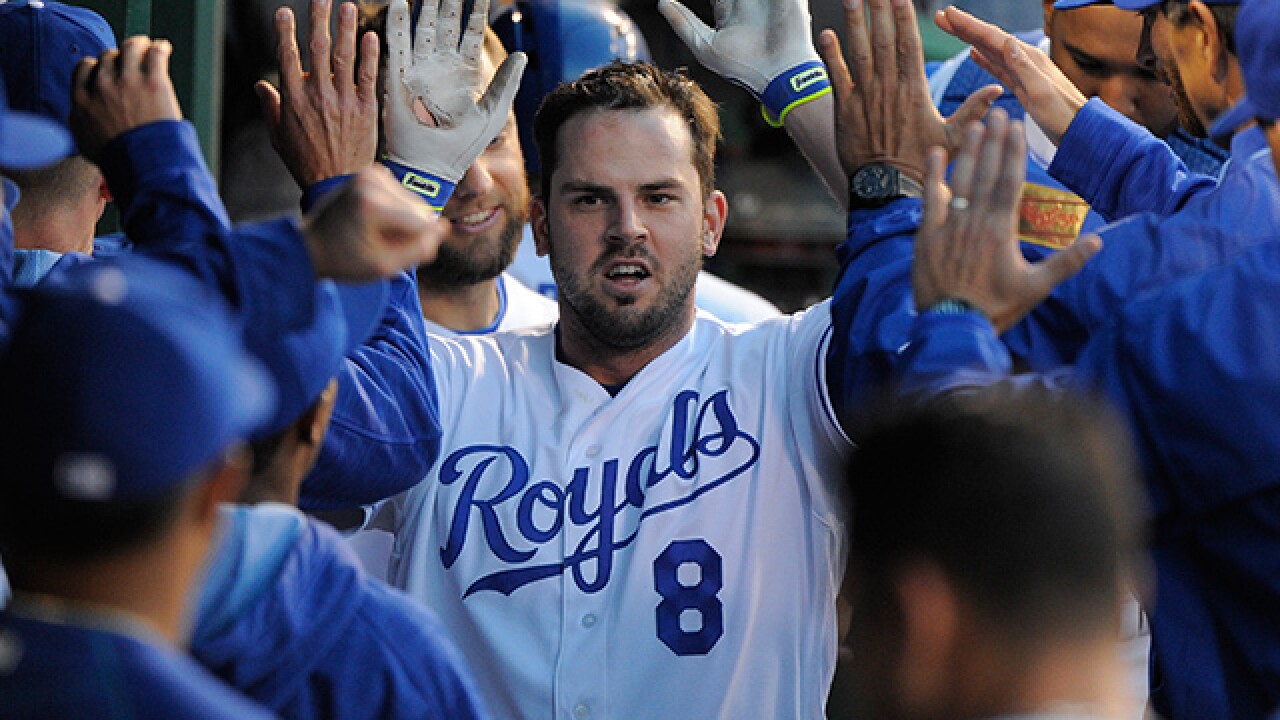 Moose is in! Mike Moustakas, Royals third baseman, will take part in the All Star Game. He was named ASG Final Vote winner along with Justin Turner from the Dodgers.

Major League Baseball was announcing the much anticipated players they say won the All Star Game votes. They were also tweeting the results one by one.

For Royals fans, it was a hold-your-breath moment. Their beloved Salvy was most likely in, but what about Hosmer? And the others?

There'd been a full court press over the last few days of voting since it seemed all of Canada was determined to vote in their Toronto Blue Jays guy for first baseman over Kansas City's Eric Hosmer.

A huge rookie season for @TheJudge44 continues as he earns a starting OF spot for the AL in the #ASG. pic.twitter.com/SgkRxqzDOj

.@MikeTrout gets voted in as a starting OF for the AL All-Star team for the 5th consecutive season – his 6th #ASG overall. pic.twitter.com/35ZnBUSa1D

George Springer makes his first #ASG as a starting outfielder for the AL squad. pic.twitter.com/ynYb9Rx6RA

Then a few minutes tick by. They do an interview with Aaron Judge.

At 6:07 p.m., there it is. Salvador Perez had been voted in as the starting American League All Star Catcher.

It's Salvy's fifth time as an All Star, his fourth as a starter.

Okay, onto the next.

At 6:08 p.m., the announcement comes. The American League first baseman will be... JUSTIN SMOAK!

Justin Smoak’s big year sends him to his first #ASG as he’s voted in as the starting 1B for the AL squad. pic.twitter.com/pvYWidDwYI

It's a tough pill to swallow. Feels a little like a baseball, actually.

Mad KC fans shut off their TVs, or closed their smartphones. I imagine at least one phone was thrown into a mound of dirty laundry.

It's entirely possible there are some who think the whole thing is rigged. And others who immediately jump to "it doesn't matter anyway," since the All Star game no longer determines home field advantage for the World Series.

As the disappointment sinks in, Major League Baseball continues with its announcements.

.@JoseAltuve27 makes his 4th straight #ASG and 5th overall as he’s voted in as the starting AL 2B. pic.twitter.com/oKVVSBI7mN

Correa. Yep, know him, too. Kansas City fans learned a lot about the Astros during postseason 2015. (Ahhh, the memories.)

.@TeamCJCorrea is the starting SS for the AL squad as he makes his first #ASG. pic.twitter.com/rIGk2DLGfv

At 6:41 Royals' Jason Vargas is announced as one of twelve AL All Star pitchers.

As the list comes to a close, there's a glimmer of hope about another Royals player making the roster.

MLB allows for what they call a "final vote".

Yes, another voting period. Another five days of fans obsessing about their guy being an All Star.

The final five for the American League are:

Moustakas is perhaps best known for his lean and fall over the third base dugout fence in postseason of 2014 to catch a foul ball. It was the sixth inning of game three of the American League Championship Series. It was a Tuesday night. But, I digress.

Voting for this final vote is unlimited. You can vote at royals.com/vote as many times as you'd like to submit a vote.

Each tweet with the hashtag counts for one vote. And for those of you tweet-savvy fans who think you can load up one tweet with twelve #VoteMoose hashtags, no luck. It will still be just one vote. One major note about hashtag voting, retweets count.

You can also text your votes, but this is limited to 35 text votes per phone number.  To vote for Mike Moustakas this way, simply text "A5" to 89269. (A5 because he is the fifth player on that particular ballot).

As voting gets underway to help Moustakas make it on the All Star roster for 2017, I imagine a collective roar from fans all over this four-state region, and maybe stretching even further into the edges of the Midwest.

It's a simple sound. One non-Royals fans might not be able to decipher without closer examination.

It's one word, and it's packed with power.