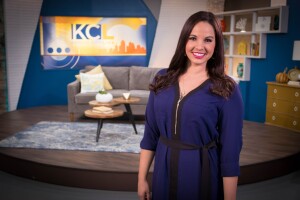 Hello Kansas City! Kelly is excited to spend her mornings with you as a Host of “Kansas City Live.”

Kelly is originally from Sioux Falls, SD where she attended Augustana University. Immediately following graduation she moved to Los Angeles for an internship at Entertainment Tonight/The Insider. After her first summer there, she was hired as an assistant in the wardrobe department for both shows. But after doing that for a few months, she switched gears and pursued acting and TV hosting. She loves being in front of the camera!

Altogether Kelly has worked on over 250 TV shows, movies and commercials as either an actress, double, stand-in or cheerleader/dancer. Some of her favorite roles include being Selena Gomez' body double on her Disney TV show (and providing advice to her during the Justin Bieber breakup – how surreal!) having a guest starring role on both Nickelodeon’s “iCarly” and “Sam and Cat,” starring in the Mike Posner/Cris Cab music video “Colors,” playing a Cheerio cheerleader on “Glee,” and standing in for actresses like Ariana Grande, Miranda Cosgrove, Lily Collins, Molly Shannon and so-on.

Although she had some great experiences in LA, in 2016 Kelly decided she missed her family too much and wanted to be back in the Midwest.
In 2017, Kelly moved to Omaha, Nebraska and worked at our sister station, KMTV, as the co-host of a local lifestyle show (similar to KCL) called “The Morning Blend.” She was there for a year before moving to KC for “Kansas City Live.”

Kelly has many interests and considers herself 50% tomboy, 50% girly-girl. She was a cheerleader for 15 years, a gymnast for 10 and a dancer for 8. She's been a cheerleading choreographer, coach, and competition judge. Cheer was a big part of her life, and she still wonders what life would have been liked if she played girls hockey instead - which she seriously considered!

Kelly is the oldest of four and is very close to her family. She says they really are her best friends and she enjoys spending time with them. Kelly and her family are all Minnesota Vikings fans. SKOL!

Kelly loves to have fun, she's sarcastic and goofy, and wants to get to know and work with members of the community. If you see her out in public, please don’t be afraid to say “hello!” because she loves meeting our viewers.