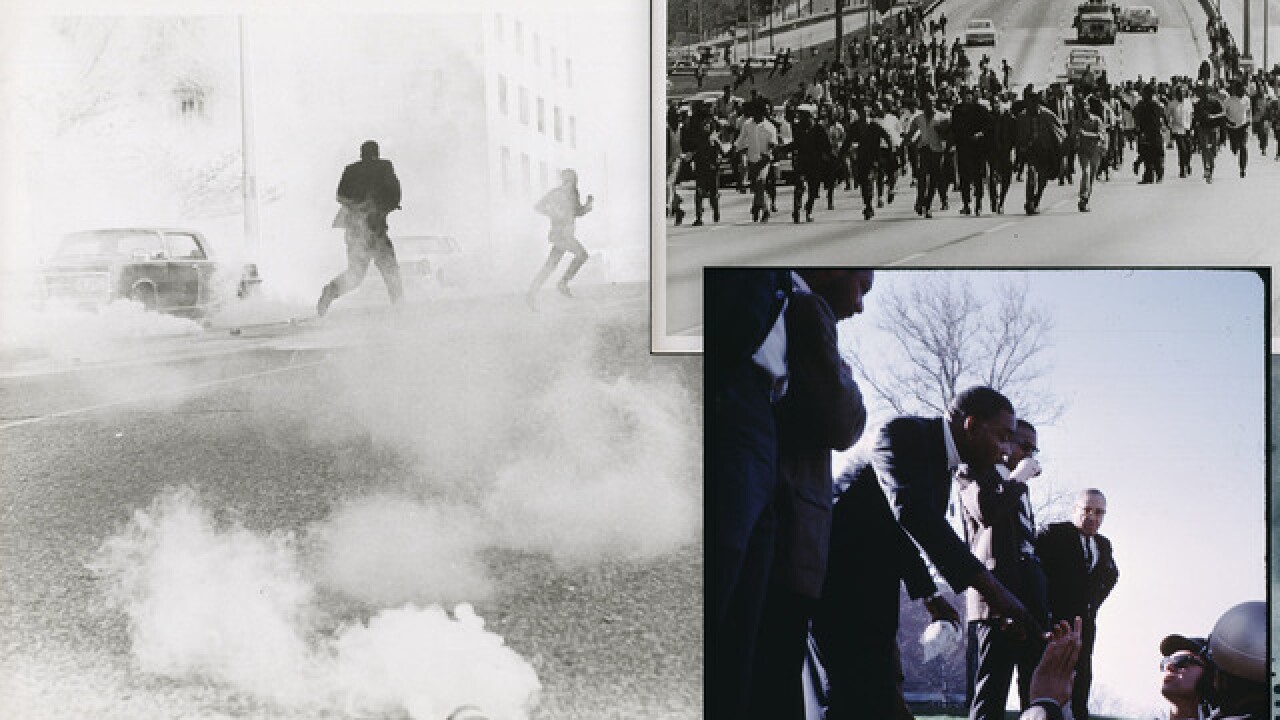 The spring and summer of 1968 was a tumultuous time of civil unrest across the United States. Riots, triggered by the assassination of Martin Luther King Jr. but also tied to deeply-rooted issues, erupted in more than 100 cities nationwide. Kansas City was one of them.

Funeral services for the civil rights icon were scheduled for April 9. Several school districts in the Kansas City area closed to allow students and the community to mourn, including Kansas City, Kansas, Public Schools.

The night before King’s funeral, Kansas City, Missouri, Public Schools had an administrative meeting during which Superintendent James Hazlett decided schools would be open.

Alvin Brooks was in the room when the decision was made to keep the schools open. He was the KCPS Coordinator of Parent, Student and Community Interpretation in 1968.

"Hazlett decided, here's what we'll do. They had just completed the school at 42nd and Indiana. Let's name it Martin Luther King, Jr. High School and then fly all the flags at all the schools at half staff. That wasn't good enough for us, but it was good enough for them and so that's why the schools were open. As a result of that, we had a riot,” Brooks said.

Students were heartbroken and angry, so they walked out in protest.

Kids from Lincoln, Manual and Central high schools called others and started marching from school to school, even walking the wrong way on I-70, heading downtown. Mayor Ilus Davis met with the students at 17th Terrace and The Paseo, near the schools. After talking to the students, he gave them permission to protest at City Hall.

"They say 300, but it looked like to me 1,000 people coming northbound on The Paseo, and they were sidewalk to sidewalk,” said Clarence Gibson, a recently-retired KCPD officer who was working that day.

As protestors made their way downtown officers followed in busses, lining up in a semicircle upon arrival.

“There was a black female who walked through the line in front of us and she was cursing us and yelling at us.” Gibson remembered. "All of a sudden, I saw a soft drink bottle from behind her come flying over her and broke. Next thing I heard was click, click, click at the sound of a pin being pulled from a gas grenade… and I mean it was all over."

“This is my own personal opinion — I didn't see a need for that first gas can. It was a pop bottle,” Gibson said. “It was one single, soft drink bottle and it wasn’t even close to the officers.”

In the midst of the chaos, school officials set up a dance at Holy Name Catholic Church as a way to get students away from the tear gas and calm the situation.

As the gas continued to spread, students were bussed from the downtown area.

But KCPD received a disturbance call from the church, and when they arrived, many students started taunting the officers. Witnesses said moments later, police threw tear gas cans inside the church where the dance was taking place. Some said the officers had no idea there was a dance in the basement.

Lee Bohannon worked for Tension Envelope Company as a machine adjuster in 1968, and joined the protest as the waves of people made their way downtown. After the riots, he would become one of the founders of the Social Actions Committee 20, or SAC20, a group devoted to “starting community programs in support of minorities” and increasing unity, according to a city document .

Bohannon said he was friends with some of the officers on the force at the time, and has spoken to them about the riots.

“Nobody has a locked-in answer as to why” the first can of tear gas was thrown, Bohannon said. "Once that happened and people fanned back out into the community, then all of a sudden it began to turn into fires and the story of the riot began there."

5:20 p.m. — Mayor Ilus Davis declares a state of emergency and issues the first emergency curfew in the city's history.

“When you look at the looting and the arson and the vandalism, people had specific reasons for why they targeted some businesses and why they didn't hit other businesses,” said Joel Rhodes, a Southeast Missouri State University professor who studied the riots for his dissertation.

State troopers were called in.

According to a report commissioned by the mayor after the riots, police officers killed five black men and a black teenager.

Rhodes wrote in a Missouri Historical Review article that one of the men was looting, caught with a case of whiskey in his hands. Another had his hand in his pocket. One drove through a police barricade. Two others were watching the fires, while another was following police orders.

None of them were armed, and no charges were filed in their deaths.

Gibson said he remembers speaking to a fellow officer on the scene at the Byron Hotel, where some died and many were injured.

“Kid's laying on the ground. I said, ‘Hey Bubba, what happened to him?’ He said, ‘Oh he cut his head on the glass when he came out of the building, split the head open.’ I said, ‘Wait a minute, he was already outside when I left,’ okay? He pulled his gun out and said, ‘He cut it on this piece of glass.’ I knew what he meant. He had decked him,” Gibson recalled.

"Kansas City was on fire," he said.

Kansas City, Missouri, Mayor Sly James, who was a junior in high school at the time, said “the world lit up.”

The area surrounding 31st Street and Prospect, home to many African-American-owned businesses, was destroyed, except for Gates BBQ.

“I can recall being on my aunt's porch. She was at 32nd and Cleveland, just a block over from Mersington, and we stood on her porch in the dusk and we could see the fires on 31st Street,” said Linda Spence, a 1968 Central High School student.

There were so many fires the Kansas City Fire Department couldn't respond to them all, and the firefighters who were able to respond were attacked by rioters throwing bricks and bottles.

Some, such as Mahasin Abdullah’s mother, wondered “Why are we burning down our own things?” Abdullah was a student at the time, and walked out as part of the original protest.

“Well, because that’s the only world they knew,” Cleaver said. “To go west of Troost was to die, and I think everybody realized that, if not consciously, certainly subconsciously.”

Forty-four people were hurt in the riots.

Months later, then-Mayor Ilus Davis created a commission to find out what led to the riots. Some of the findings included factors such as a lack of dignified treatment by KCPD, school deficiencies, and poor housing.

And while Cleaver said Kansas City has come a long way and “ought to feel pretty good about the things they’ve done,” he encouraged people not to be complacent.

“Anybody who is satisfied with where we are is actually contributing to us becoming worse. Because the moment that we're no longer intentional about trying to improve race relations is the moment that we begin our reverse,” Cleaver said.

"When you have disaffected people and you do not address their concerns over a period of time in a way that's constructive, you're going to have more riots. It's just that simple,” James said.

In 2018, some argue racial tension is at an all-time high. Kansas City has changed dramatically.

KCPD now has a reputation of responding to protests well, treating people with courtesy and respect, according to the current mayor. The city has had African-American mayors, school superintendents and heads of important agencies such as the Greater Kansas City Chamber of Commerce.

Current Lincoln College Preparatory Academy students said they are proud of their alumni for taking a stand against what they felt was injustice, and hope to carry that legacy on.

“I feel like at some point you have to give up on respecting the authority, because if the authority is contributing to injustice, then there's no difference between them and who's causing the injustice,” Lincoln Prep senior Sakina Bhatti said.

“Every issue that America has, the youth should have some type of input on it, because we are the ones who will see the consequences and repercussions, whether good or bad, of the decisions made by our governmental leaders,” Lincoln Prep senior Danielle Foster said.

From a historical standpoint, black and white Americans have very different perceptions of the 60s, according to Rhodes, the SEMO professor who studied the riots for his thesis.

Some who lived in the era and watched the events unfold marveled at what the black community achieved.

“Black people in fact had been amazingly patient,” said Charles Hammer, a former Kansas City Star reporter. “How they kept it under control in that era is hard to figure out.”

“You had the Black Panthers. You had SAC20. You had CUA. You had the NAACP. You had the Baptist Ministers Union . All of these groups had become socially active and had begun to demonstrate and exhibit their anger in the midst of their hope,” Cleaver said.

Many of the issues which led to the breaking point of the 1968 riots are still plaguing the same community today, but there are different ideas about how to fix them.

"Some of the same issues we faced in 1968 that were the crux of the rioting around this nation, to a degree still exist in urban America today,” Brooks said.

“On a governmental level, we have to enact policies and recognize that there are differences, and that some things have been done in order perpetuate a bad system — and we have to create policies that address those issues,” James said.