KCFD crews on the scene reported heavy fire in the basement of the three-story building just before noon. 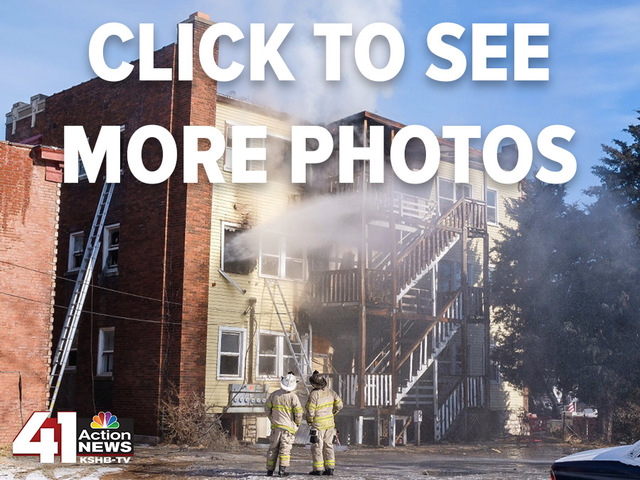 It was the second fire at the building in December.

An electrical fire three weeks ago forced everyone out, so there was no one inside the building on Wednesday when fire crews got there.

Jackson and several other residents said all their belongings were still inside.

"I have everything in there. My whole life is inside that apartment," Jackson said.

Bernadette Yeakey cried that her grandkids' pictures were in her unit.

"All my furniture, everything," another resident, Tawana Garth, said.

None of the tenants had renter's insurance. Some of them were without places to go.

Peoples said the city shut off the power earlier in the month, and the building should have been secured, according to the law.

"The power was cut off. It was not turned back on. We do not know at this point what level of work was going on inside," Peoples said.

41 Action News contacted the building's landlord, Brian Stoker, and asked him about the condition of the building, and what work was being done. Stoker did not answer our questions.

"He said we could not go in the building -- that he was going to make arrangements for us to get our stuff out of there," Garth said.

The tenants said since the electrical fire earlier in the month, they've been saying at a hotel Stoker paid for.

Several tenants said they came back to the apartment building just a couple days ago to check on their belongings, and the door was open. They said there was a heat generator sitting in the hallway.

Peoples couldn't comment on that, but said if Stoker had the generator, it would not be breaking the law because he's the landlord.

"We was trying to get some resolution going on. Now everything's gone, and yet insurance adjusters are out here. They're going to get their money, but what do we get?" Yeakey said.

No one was hurt in the fire.

Stoker has started a GoFundMe page for the four tenants he said lost "most all their possesstions."

He is trying to raise $2,000 for each tenant to help them get back on their feet.