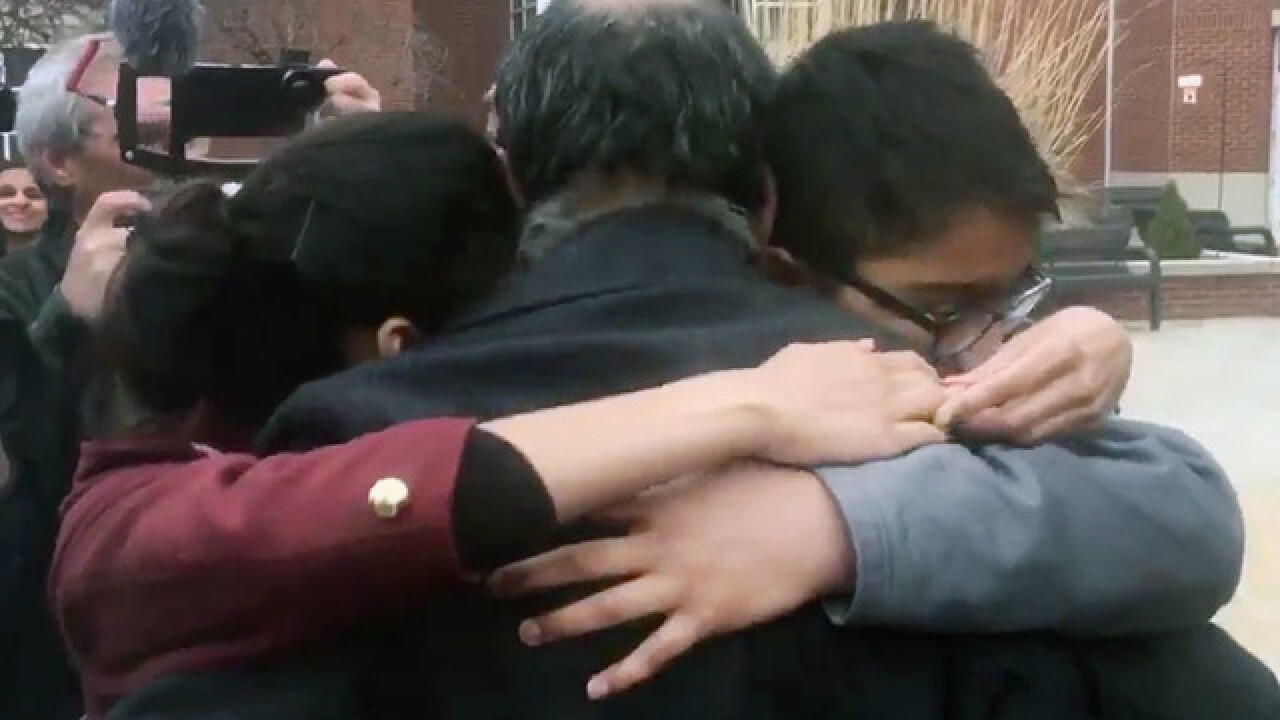 KANSAS CITY, Mo. — Lawrence chemist Syed Jamal's release from the Platte County Jail was so quick, his family wasn't there yet when he walked out the doors, carrying a sack of clothes and a stack of books.

A group of reporters met him outside, instead.

After he called his wife, he talked about how it felt to walk out those doors.

"In prison, you hardly have any individuality, your identity. You feel like you are your own person again. And freedom — feels much better. Liberating, yeah," Jamal said.

ICE agents arrested Jamal on his front lawn nearly two months ago because of a complication with overstaying his visa. He was almost deported back to Bangladesh. His team of lawyers filed appeal after appeal. On Tuesday, a federal judge ordered Jamal to be released while an immigration board reviews the case.

People in the courtroom cheered when Judge Roseann Ketchmark ordered the release.

Jamal, 55, has been in the Platte County jail since mid-February. The native of Bangladesh has lived in the United States for roughly 30 years.

Jamal ran to meet his wife, Angela Chowdhury, and their three kids in an emotional reunion.

"Dad, I haven't seen you in forever!" their seven-year-old son said.

Chowdhury said the last couple months have been unbearably hard, but Tuesday was the moment they've been waiting for.

"I can touch him and talk to him. The children are very happy. I can't explain, I'm so happy. We are so happy and thankful to everyone," Chowdhury said.

Jamal said the first thing he is going to do when he gets home is spend time with his family and friends and eat some good food.

"They were telling me school food and jail food, they share some things in common. They're both bad!" Jamal joked.

When Jamal was arrested, officials said the Park University instructor was being deported because he was not in the country under full legal status.

The Board of Immigration Appeals granted Jamal a stay of deportation in mid-February.

Lawyers representing Jamal filed paperwork asking the federal judge to let Jamal out of jail. They argued he has no criminal background and is a contributing member of society who deserves to be with his wife and three children — ages seven to 14.

In documents filed before Tuesday's hearing, the Department of Homeland Security countered, saying this judge does not have jurisdiction to decide whether Jamal should be released from jail.

Judge Ketchmark ruled Tuesday she has jurisdiction to decide whether ICE can detain a person and whether an indefinite detainment impacts due process rights. Ketchmark said she can't decide anything specific to Jamal's deportation status.

Ketchmark said Jamal is not a danger to the community, has no criminal record, and his three children mean he's not a flight risk.

Jamal will return to supervised release and will have to check in with ICE on a regular basis, which are the same conditions he was under prior to being arrested.

The immigration appeals board will likely review the case this summer and will decide whether or not Jamal will be deported.

Jamal's attorney, Rekha Sharma-Crawford, said she has confidence in the case.

"I felt like I had made a promise to those kids that I was going to bring dad home. And I made a promise to his wife that we would do everything we could and I think all of us did that today," Sharma-Crawford said.

More than 100 people came to the federal courthouse in downtown Kansas City to support Jamal. The courthouse opened an overflow room for the crowd to watch proceedings on a video monitor.

"I'm really happy that I'm back with my family, appreciate everything. Hope things get better for us, myself, and my family," Jamal said .

Congressman Emanuel Cleaver, II offered his support to Jamal in his immigration battle. Cleaver released a statement on Jamal's release:

“I am pleased to hear that Mr. Syed Jamal will be able to spend some much needed time with his wife and children but this is far from over. A federal judge released Mr. Jamal from a Missouri County detention center today but he still faces deportation. The current immigration system is broken and affects families who have responsibilities and deep ties to their communities. We must fix these laws that criminalize hard-working, contributing members of society like Mr. Syed Jamal and that’s what I plan to push for in Congress.”