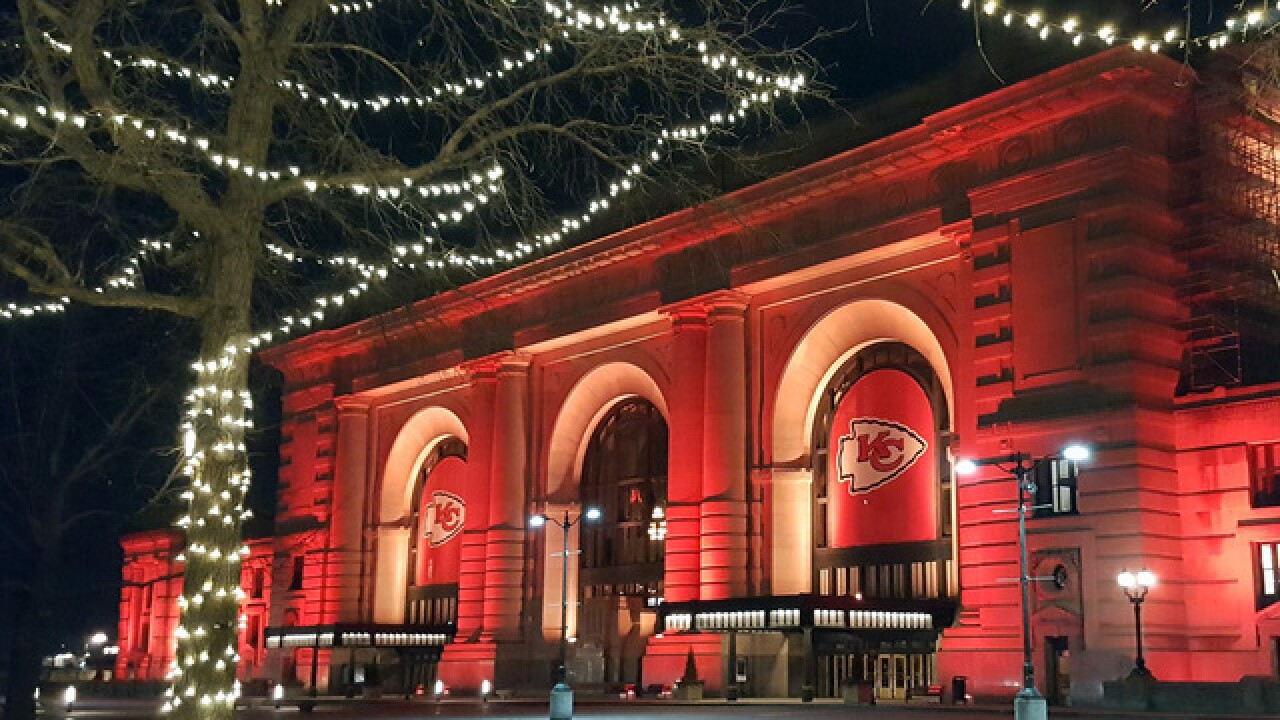 Copyright 2018 Scripps Media, Inc. All rights reserved. This material may not be published, broadcast, rewritten, or redistributed.
Jason Gould - 41 Action News
<p>Union Station shows off Chiefs red ahead of the playoff game on Friday, Jan. 5, 2018.</p>

The Chiefs host the Tennessee Titans in the first round of the NFL playoffs. Kickoff is 3:30 p.m. at Arrowhead Stadium.

The red buildings have become a tradition for Chiefs fans ahead of important games. Saturday's game could break a streak many fans want to see come to an end: the Chiefs have not won a playoff game at home since January 8, 1994.

"I don't know how far we'll go, but I expect to get past this round. So it's definitely a moment I want to be a part of," said Drew Smith, a lifelong fan.

He stopped at Rally House Thursday to buy a Chiefs hoodie prior to attending the game.

Managers at the merchandise store expect Friday to be one of the busiest days of the year.

"It will be a wreck. I mean we will see shirts flying and you will see people everywhere. We love it when it's like that. It's a real adrenaline rush," explained Dee Perkins.

She said the store's Plaza location will often see fans from opposing teams the day before a game. She's ready to talk trash with Titans fans.

"They'll come and ask, 'Where’s your Titans stuff?' And the perfect answer is, 'In Tennessee where it belongs!' But they are always very friendly and we've not had any fights," she said with a smile.

Perkins said running back Kareem Hunt's jersey was the hottest selling item to start the season. Throughout the year, jerseys for Alex Smith, Travis Kelce, and Tyreek Hill have also sold well. But after last week's game in Denver where rookie quarterback Patrick Mahomes started, his jersey has seen a spike.

"The phone was ringing continuously wanting to know if we had Mahomes jerseys. Men's, women's, youth. If we had any player T-shirts. Anything Mahomes was flying out of here," she said.

Smith can see why.

"I think he's going to be the quarterback for a while. So I think people are trying to get ahead of a curve there. It might be a hot item next year."

The parking lots at Arrowhead Stadium open at 10:30 a.m. Saturday. Kickoff is set for five hours later. Fans at the game will receive red and white rally towels.

Here's the playoff rally towel the @Chiefs are giving away to fans at Arrowhead for tomorrow's game vs. the Titans. I know @LindsayShively wants one!!! #ChiefsKingdom pic.twitter.com/rIPPKyetEv