KANSAS CITY, Mo. – Mona Randolph cannot breathe on her own for very long.

The 81-year-old has lived in Kansas City most of her life.

When she was 20, she contracted polio.

She said she remembers the day well.

On a September afternoon in 1956, she started having flu-like symptoms: a fever, bad headache, and her neck hurt.

On the second day, she began to feel weak and lose use of the left side of her body.

By the third day she couldn't get out of bed, and she couldn’t take a breath on her own.

Mona was rushed to St Luke's Hospital, “with a sensation of not being able to breathe,” she recalled.

She was barely conscious.

She was put into an iron lung immediately.

All she remembers is relief. She was breathing, but she had to be in the machine to survive.

Polio had paralyzed Mona. The muscles she needed to breathe no longer worked.

Mona spent three months in the iron lung. She endured what she describes as “torturous physical therapy.” 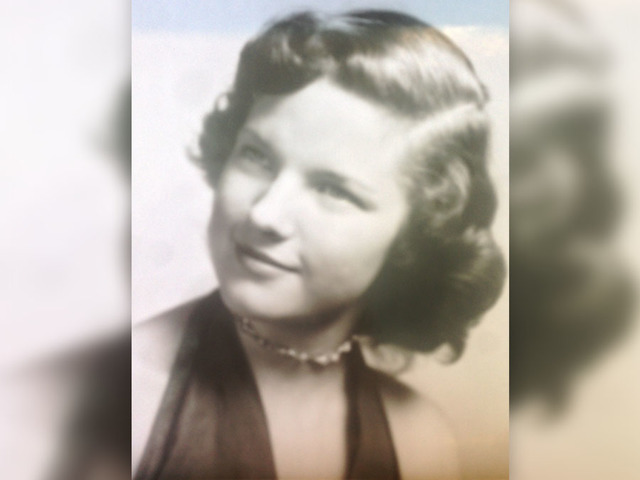 Mona before she was diagnosed with polio.

She eventually moved to a well-known rehabilitation facility in Warm Springs, Georgia. She said she learned valuable breathing techniques there which she still uses today.

In her own words:

“After seven months at Warm Springs, there had been dramatic changes in my appearance and abilities. I had gained back 20 of the 45 pounds lost to polio, could breathe without assistance (and frog-breathe for coughing) and was skilled with custom-made appliances. Local Georgia shop geniuses and my occupational therapist had fashioned clever devices for feeders and hand splints – one jokingly offered to make a corn-on-the-cob holder – that allowed me to do amazing, robot-like feats. I could now feed myself peas with no spills, write large, loopy notes home, and paint (a hobby that gave me much pleasure and some income later). When I arrived I had only been able to scratch my nose.”

It took her eight months to learn to breathe well enough that she could sleep without aid. She could breathe, but had to learn to live life in a wheelchair. There was no curing the paralysis polio caused.

Mona went 20 years without machinery to breathe before a post-polio relapse put her back in the iron lung every other night.

She now sleeps in the lung six nights a week. The seventh night, she sleeps in a water bed.

She smiled when she described herself as a side sleeper. That’s how she’s most comfortable, but there’s no side sleeping in her iron lung.

Mona still lives in Kansas City in a cozy home off Ward Parkway. She's one of only a handful of people in the United States who still using an iron lung to survive.

They live with a constant concern about the condition of their machine.

The companies which used to make iron lungs don’t make them anymore.

The company which provided parts for them, don’t have many, if any, parts left.

Insurance companies and the biggest nonprofits which used to help, don’t now.

There just isn't as much of a need.

Brian Tiburzi, executive director at Post-Polio Health International in St. Louis, said people have had to get creative with their options.

“JH Emerson, who manufactured the iron lungs that we know are still in use today, stopped production in 1970. So, new replacement parts can be difficult to find. In 2004, Respironics notified all of the individuals (and their physicians) who were renting an iron lung from them informing them of their options,” Tiburzi said.

He provided 41 Action News with what he said was the message:

“Transition to an alternative device as soon as feasible; Continue using the Iron Lung Device with the understanding that if the device fails Respironics Colorado may not be able to repair the device; or, Accept donation of the device and pursue other support and repair options. As a company regulated by the Food and Drug Administration and other quality system certification organizations, we have limitations on the suppliers and repair sources we can qualify and accept into our quality system. However, the owner of the device, in this case the patient, may seek such repairs from a non-regulated third party.”

Tiburzi went on to say some iron lung users tracked down iron lungs that were no longer in use in order to have a supply of replacement parts when they need them.

Based on his organization's most recent data, as best he can tell there are likely 350,000 to 500,000 polio survivors currently living in the U.S.

Forty to 70 percent of survivors are experiencing some sort of post-polio syndrome.

“Up to 70 percent of polio survivors are experiencing the late effects of polio, which include new muscle weakness, pain, and fatigue,” Tiburzi said.

Those who still use an iron lung, like Mona, swear by it. Mona said doctors and caregivers over the years have tried to get her to go to a breathing machine that blows air into her lungs, but she says it is not nearly as natural a feeling as the lung. Her argument is the new ways to breathe are easier and cheaper, but not better.

Those still using iron lungs have people they trust to help repair their machinery.

For Mona, that person is her husband Mark, a tall, strong man who said he was lonely before he met his wife. He’s younger than Mona – sixteen years younger.

They met later in life, and describe their relationship with a little glimmer in their eyes. Mark said he was lonely. Their love story started as a friendship and developed into one of empathy and commitment.

According to the U.S. Centers for Disease Control and Prevention (CDC), most of the world is now polio-free:

“Four regions of the world are certified polio free—the Americas, Europe, South East Asia and the Western Pacific – this means that 80% of the world’s people now live in areas that have eliminated the threat of polio. Only three countries have never interrupted the transmission of wild poliovirus— Afghanistan, Nigeria, and Pakistan. But all countries will be at risk of importation of polio until it is eradicated completely from the globe.”

There has been a concerted effort since 1988 to eradicate polio. The World Health Assembly launched the Global Polio Eradication Initiative (GPEI), spearheaded by national governments, the CDC, Rotary International, World Health Organization (WHO), and UNICEF, with substantial support from the Bill & Melinda Gates Foundation.

Experts work to remind people as often as they can that until polio is eradicated, vaccinations efforts must continue. The CDC estimates if the current vaccination efforts were stopped, polio would quickly spread worldwide, paralyzing an estimated 200,000 children every year.

Mona spends her days caring for her house and her husband, she likes to read and study scripture but it takes work all day, every day to breathe.

It is because of her experience Mona and her husband Mark don't miss any opportunity to demonstrate why it's important kids are vaccinated for polio. She tells them it’s about protecting what they have.

"Their ability to move around in this world is important and valuable and that they should do what they have to do to protect it," she said.

She wants them to protect their ability to move, and to breathe.