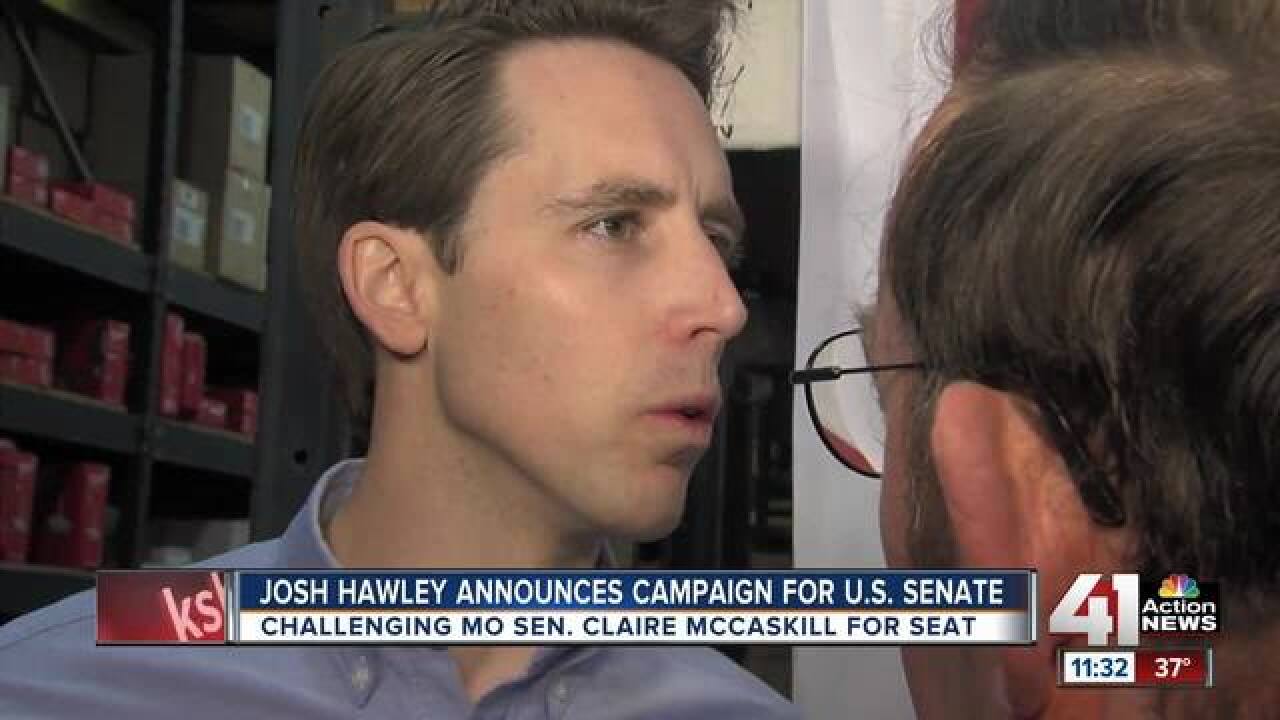 Trump is scheduled to be in St. Louis Wednesday for an economic roundtable and a private fundraiser for Hawley. Attendees who pay $50,000 per person will get a seat with the host committee, while others can pay $25,000 for reception tickets or $5,000 to get into the event, the Springfield News-Leader reported.

During a rally in suburban Kansas City to officially kick off his campaign, Hawley conceded he could use the president's help raising funds for his race against McCaskill, although he said it will be his message, not money, that wins the race.

"When it comes to raising money, we'll never be able to surpass Claire McCaskill," Hawley said. "She has 36 years of special interest political chits that she has collected. ... So look, we're the underdogs in this campaign and we're glad to have the president's support. We're going to fight every way we can to raise the resources that we need."

McCaskill, who Hawley lambasted as a career politician beholden to the liberal elite, Wall Street and Hollywood, is seen as one of the most vulnerable incumbents as a Democrat in a state won by Trump by nearly 20 percentage points in 2016.

When asked if he wanted the support of Missouri Gov. Eric Greitens, a fellow Republican who was indicted last month on a felony invasion-of-privacy charge, Hawley said he couldn't respond because his office has an active investigation into Greitens underway.

Hawley, who has been criticized for finding that Greitens' staff didn't violate open records laws by using the secretive messaging app Confide, said the case proved that the attorney general's office needs subpoenas, stiffer penalties and new tools to enforce the Sunshine Law. He said currently his office can only request interviews but if the a person exerts executive privilege or says they aren't going to cooperate his office has no power to force the person to cooperate.

"We need to have that power," Hawley said.

After his stop in Raytown, Hawley was scheduled to visit Springfield and St. Louis Tuesday.

"Josh Hawley has spent over a year as Attorney General refusing to investigate his biggest donor, friends, and allies and perpetuating the culture of corruption in Jefferson City by looking the other way and conducting sham investigations. He is failing at his new job as Attorney General and not working very hard as a candidate. In that same time, Claire McCaskill held over 50 town halls to listen directly to Missourians and took their ideas to the Senate to make real progress for our state. The contrast in this race is clear -- Josh is busy looking past his present job except to protect his donors and friends. Claire won't let anything -- or anyone -- stop her from getting things done for Missourians."