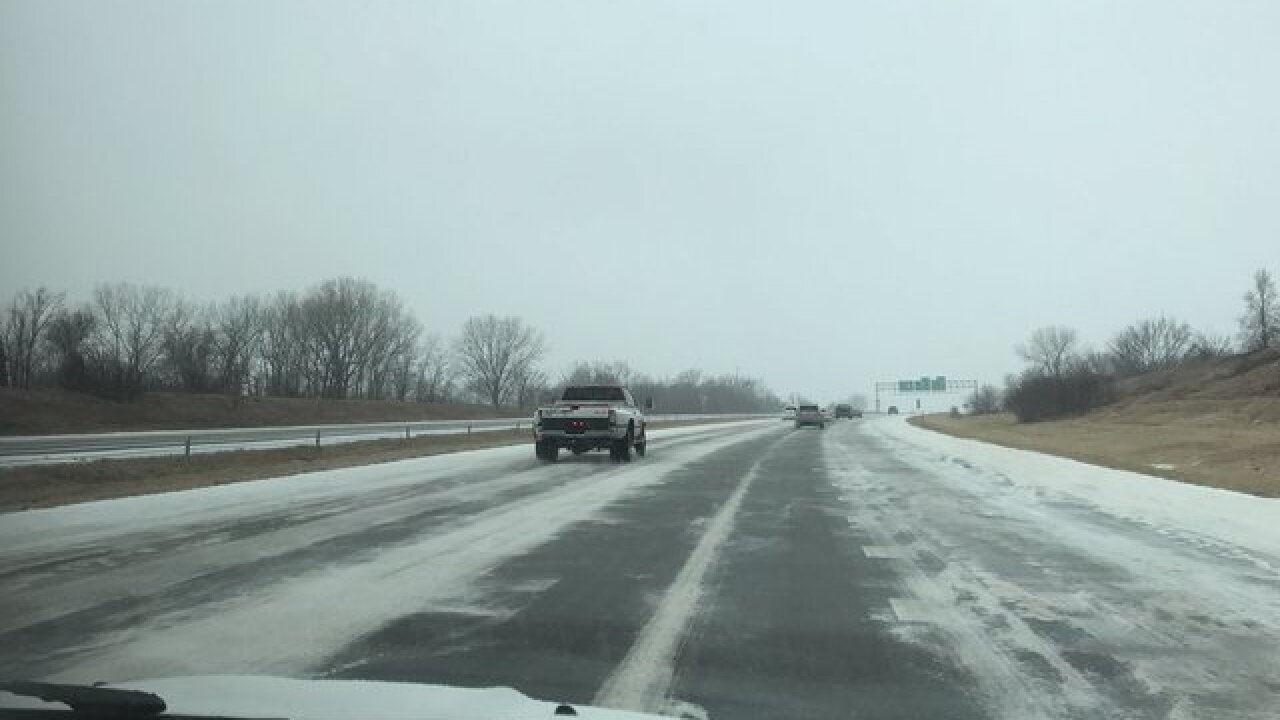 We're keeping an eye on the roads as winter weather rolls into the KC metro.

ALERT: Emergency vehicle on SB I-635 past US-69 in the Northland. Right lane is blocked. Icy conditions on roadways. #KCTraffic pic.twitter.com/58BDgHtYKg

Truck drivers pulling off just North of Platte City on I-29. They tell me they're taking a quick break to clean ice off their windshields before they head into the more active weather further north @41actionnews pic.twitter.com/6DWc47Czt9

Starting to see snow just north of the airport on I-29. Roads are starting to get a bit slick @41actionnews pic.twitter.com/whVbW93pN1

Here is an update from downtown Kansas City. Cars are driving slow on the roads because of ice patches. The rain and freezing rain has stopped. Be careful. @41actionnews pic.twitter.com/JQK19fZlwF

. @41actionnews tracking the problems on the roads. Big rig jack-knifed on I-29 exit to Tiffany Springs. pic.twitter.com/pDykWvPL1d

10:20am RADAR: A band of snow from Lawrence to St. Joseph will continue to fall apart. Still a chance to see a few snow showers until 2pm in the metro. Little to no accumulation expected in KC. 1-3" northwest. pic.twitter.com/FY0ieBOHXy

10:20 a.m. KC Streetcar service is suspended due to ice build up on the wires.

RIDER ALERT: #kcstreetcar service currently suspended due to ice build up on the wires. Service continues with 2 @RideKCTransit buses. Riders may board buses at designated streetcar stops for free. pic.twitter.com/AqcL62Df3Q

10:11 a.m. Crews are working to clear a large downed tree in Swope Park.

9:29 a.m. Overland Park crews are back out putting salt on the roads.

Round 2 for @opcares . The temps have dropped 20 degrees in 4 hours. This is when we'll start to see freezing. Overland Park is out putting another coat of salt on roads pic.twitter.com/qwocmwaMML

9:17 a.m. 41 Action News Reporter Steven Dial talked with a truck driver who is taking a break because of the weather.

This truck driver is taking a break from the road. He said they have to be extra careful because they are moving with heavy materials and it’s harder to stop on ice covered roads. @41actionnews pic.twitter.com/NhUdvaONCb

Another truck driver asked cars to understand large trucks "can't stop on a dime" and to give them some room.

This is a message from all truck drivers during winter weather. @41actionnews pic.twitter.com/CMEEM6YLNN

❄️❄️ LISTEN to that icy mess falling in the #Northland ! My folks just sent this to me from Liberty area. pic.twitter.com/TljTdaSxZj

Camera iced over in KCK on 435 N of Kansas Ave. Yikes!

We are starting to get reports of precipitation changing over to sleet/freezing rain in the Overland Park/Leawood/Olathe area. The rapid freezing has also started to occur in these areas.

8:40am RADAR: Ice has covered elevated surfaces & untreated roads all across the KC metro. The icy mix is indicated by the pink & purple on our radar. What are you seeing? pic.twitter.com/sWagbdj5hB

8:35 a.m. Ice is starting to cover Storm Tracker as we're out covering the weather.

Within the last hour, we've seen a 14 degree temp drop in Pleasant Hill once the cold front arrived. Wet roadways are quickly becoming icy roadways. Use extreme caution if you must travel this morning. pic.twitter.com/StjekuhKvD

In OP the trees have ice. Roads still wet. Trees are elevated and the first to freeze. The next 2 hours will see all surfaces untreated ice up. @41actionnews pic.twitter.com/ymhnGjM0c8

UPDATE: Crash on NB I-435 past 24 Hwy has CLEARED! Still very slow through that area. #KCMO #KCTraffic pic.twitter.com/wqgm1Gdvz8

We are receiving multiple reports of freezing rain and sleet across the KC Northland. Also, flash freezing on the ground has begun in this area. Take caution when traveling! #Kcwx #mowx #KSwx

Reminder: As things start to transition to ice on the roads-- things to do:
Drive slowly
Don't break hard
Leave plenty of room
Plan ahead
*Stay home! pic.twitter.com/3UR6bsMC29

ALERT: Crash on SB I-35 @ US-69 in #JOCO . ROADS ARE SLICK! I see a truck that is facing the wrong way. #KCTraffic pic.twitter.com/BeBvP4c1GZ

8:07 a.m. St. Joseph is starting to see some ice on driveways and sidewalks.

It's starting to get icy in St. Joseph, MO. Driveways, decks, and sidewalks have a light glazing of ice already. pic.twitter.com/Kvoii6JRg7

8:00 a.m. Some people are starting to see rain freeze on windows from Gardner in Lenexa.

Rain is freezing on windows and objects from Gardner to Lenexa https://t.co/aHhSQCHYAe

7:57 a.m. The National Weather Service in Kansas City is tweeting what road conditions look like as of about 8 a.m.

7:55 a.m. 41 Action News Anchor Richard Sharp is near Zona Rosa in Stormtracker. He's noticed freezing rain is starting to stick to the car. With temperatures dropping, he's also seen people slowing down on the highway.

7:47 a.m. MoDOT crews are starting to treat roads in the metro area.

Happening Now: Some of our crews have hit the roads. Remember, give them plenty of room to operate. At least 100 feet. #besafe #kctraffic pic.twitter.com/EfXALiqP5X

Another view of the acciden on SB I-35 @ 119th St. Causing some very SLOW speeds through the area! #KCTraffic pic.twitter.com/mYDuJoMSHQ

Lots is rain still on the road. This is I-29 in between Barry and 64th. @41actionnews @lnanderson @NicolePhilli pic.twitter.com/NkZlPK8r5A

7:40am RADAR: The metro is currently split between 30 and 33 degrees. Roads are turning very slick with a flash freeze already occurring along and west of I-35. pic.twitter.com/bI8Kfb9Zo2

ALERT: Crash reported on SB I-35 south of I-435. You can see the stopped traffic on this scout camera!!! Avoid this area. #KCTraffic #Olathe pic.twitter.com/nyW7EPhDdR

7:30 a.m. Meteorologists Lindsey Anderson and Nicole Phillips say the heavy rain continues to move off to the east, and the frozen precipitation sticks around. Here's the latest forecast update.

Rain falling in JOCO! This is I-35 @ 75th St. Very wet out there this morning. Temps are dropping! #KCTraffic pic.twitter.com/aDPKxgZ3SN

Sleet starting to fall at the NWS office in Topeka at 650 AM.

NB US-71 is really slowing down this morning. Stop and go back to 75th St. Slow back to 85th. Seeing more people out there earlier trying to miss the freeze! Good job everyone!

ALERT: Crash closing multiple lanes of WB I-70 @ I-435 in KCK! Roads are wet and slick already. #KCTraffic #KCK pic.twitter.com/QOo7O4Ylri

Crews are starting to treat the roads in Overland Park.

The rain is picking up, but we haven't seen any freezing yet in Overland Park. I'm on board a snow plow as it spreads salt on the roads to keep roadways safe for you.

Drivers say respect snow plows, stay back and let them do their work. You'll thank them later!! pic.twitter.com/j4hxP67c4d