After failing to follow a state statute for ten years, Clay County could face possible lawsuits and settlements with current and former elected county leaders totaling up to $300,000.

KANSAS CITY, Mo. — After failing to follow a state statute for 10 years, Clay County could face possible lawsuits and settlements with current and former elected county leaders totaling up to $300,000.

The state statute at the center of the conflict was put in effect in 2007 and requires almost all elected county leaders to receive the same base salary.

“I took a quick look at what our salaries schedule was and it was clear that I had inherited a mess,” she said. “To say I was shocked at how out of sync we were with the law when I received my first paycheck would be an understatement.”

Documents obtained by 41 Action News show uneven salaries between over a dozen elected offices up until this year. 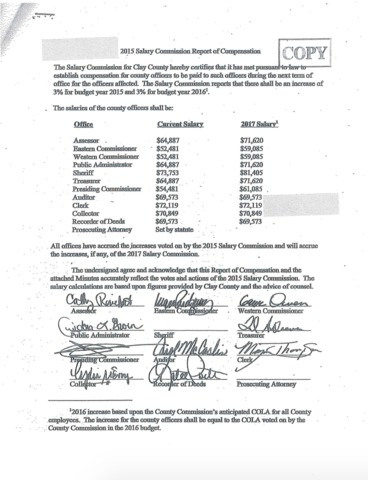 After noticing the issue, base salaries for almost all the elected Clay County leaders have been set at $73,704.

Despite correcting the problem, Clay County could still face consequences ahead for not following the statute.

Ridgeway told 41 Action News that the county could face settlements with current and former county officials impacted by the issue that could total around $300,000.

The associate commissioner also said that other impacted county officials could file a lawsuit.

“Every passing year increases our potential liability. It’s time for us to act,” she said. “We’re treating it just like any other issue that would come before us that’s a potential legal liability that we want to put a stop to.”

Moving forward, Ridgeway said the county would be reaching out to impacted county officials to navigate through the aftermath of not following the statute.

“It’s a big deal to me when my county is non-compliant and has persisted in being non-compliant,” she said. “It’s time for us to act and act now to cut off that liability.”