One of Grundy County's largest employers will be closing a plant in Trenton, Missouri by the end of May 2018.

TRENTON, Mo. — One of Grundy County's largest employers will be closing a plant in Trenton, Missouri by the end of May 2018.

ConAgra Brands Inc. told the Missouri Department of Economic Development its closure will be permanent and all 282 positions will be eliminated.

That doesn't sit well with Ginger Youngs, who has worked in its warehouses for 22 years.

"You don't want to walk off and start over at 54 years old," Ginger Youngs said.  "These are the highest, with benefits, paying jobs right in this area."

The town's chamber of commerce told 41 Action News there will be a large impact on the population of 6,000 people.

There are four large employers in the area: NCMC College, Modine Manufacturing, Wright Memorial Hospital and ConAgra, which is the largest.

In a letter, the company said the move comes to, “improve inefficiencies and effectiveness and eliminate redundancies within its supply chain network.”

ConAgra said those jobs are going to a plant in Archbold, Ohio. It has already started cutting jobs and told its workers about the closure in March 2016.

Still, some workers and their families are holding out hope for a buyer.

"We’re hoping her seniority keeps her in the door or somebody comes in to take it over," said William Youngs, Ginger Youngs' wife.

ConAgra said as of Wednesday, it had no knowledge of a potential buyer.

"People say Trenton is going to dry up because of it. It will leave a hole in Trenton," Tim Bland, a local barbershop owner, said. "I have a lot of friends who work there, and customers. It’s going to impact me and local business."

Bland said he believes people will move away from the town to follow the work -- something the Youngs have not put outside the realm of possibilities.

"I’m sticking with it 'til they won’t let me in the door, because I have seniors and don’t want to uproot them. But after that, it's just he and I," Ginger Youngs said.

Here is the letter ConAgra Foods sent notifying the state of Missouri and officials in the City of Trenton of its closure. 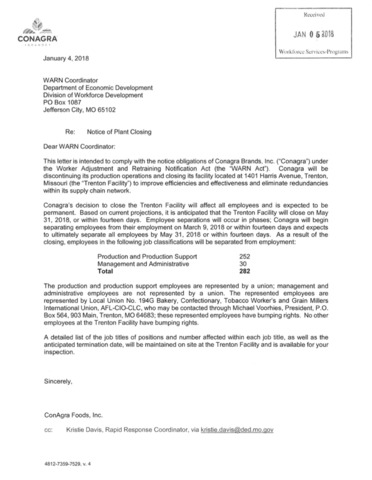