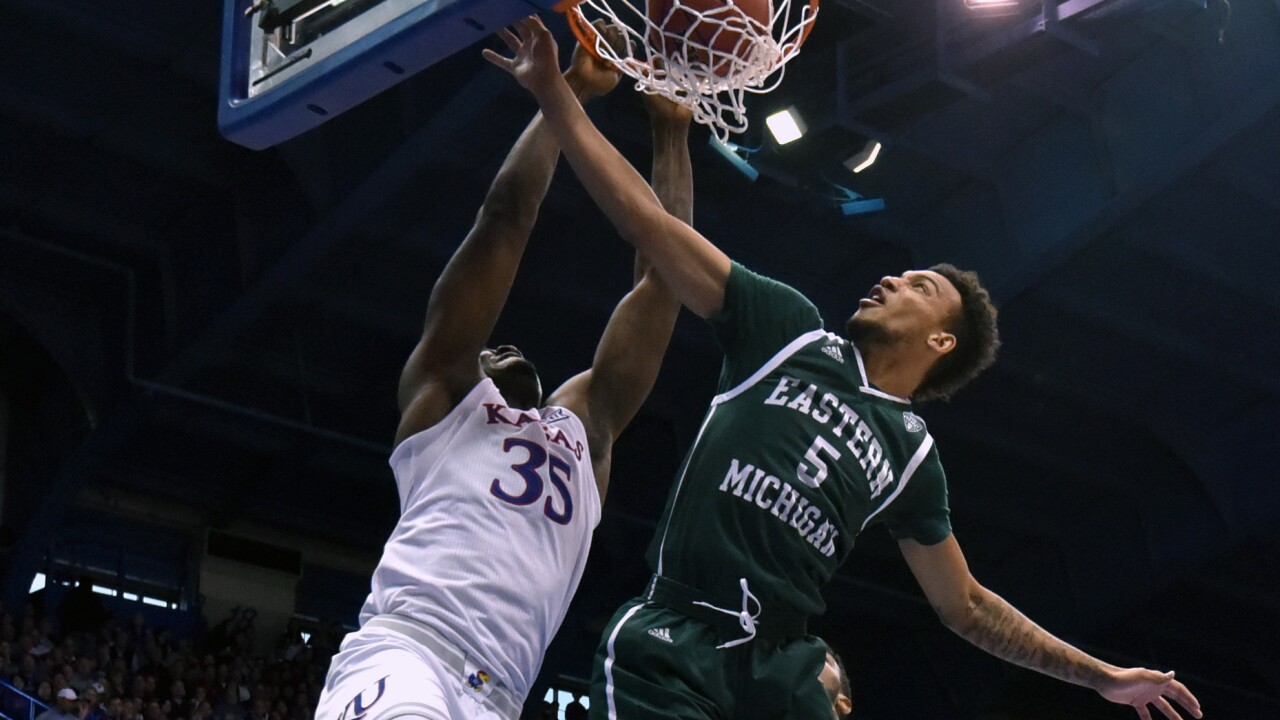 Ed Zurga/Getty Images
LAWRENCE, KANSAS - DECEMBER 29: Udoka Azubuike #35 of the Kansas Jayhawks dunks against Elijah Minnie #5 of the Eastern Michigan Eagles in the first half at Allen Fieldhouse on December 29, 2018 in Lawrence, Kansas. (Photo by Ed Zurga/Getty Images)

LAWRENCE, Kan. (AP) — Udoka Azubuike scored 23 points and grabbed nine rebounds in his return from an ankle injury, and No. 2 Kansas cruised to a 87-63 win over Eastern Michigan on Saturday.

Azubuike hit the ground running after missing four games, scoring seven points in the first six minutes, highlighted by a couple of and-one dunks. He finished with 14 in the first half and added nine in the second before being sat to rest.

The 7-footer's presence opened things up offensively for the Jayhawks (11-1) as they racked up a season-high 25 assists and had 10 players score. Quentin Grimes was second on the team with 16 points, and Devon Dotson added 15.

John Thompson IV led the way for the Eagles (6-7), finishing with 15 points and 14 rebounds. Paul Jackson had 15 points as well.

The rebounding was even at 42-42, but Eastern Michigan dominated the offensive boards, finishing with 19 to Kansas' nine.

The Jayhawks shot 33.3 percent on 3-pointers while the Eagles were 18.8 percent.

This was the first-ever meeting between Kansas and Eastern Michigan. The Jayhawks are now 15-1 against members of the Mid-American Conference all-time.

Eastern Michigan was consistently outmatched, but takes away valuable experience as it begins MAC play.

Kansas gets its inside anchor back in Azubuike and caps its non-conference schedule with an easy victory.

Eastern Michigan returns home for its first MAC tilt, facing another tough foe in No. 21 Buffalo on Friday.

Kansas opens Big 12 play with an early test against No. 25 Oklahoma on Wednesday.