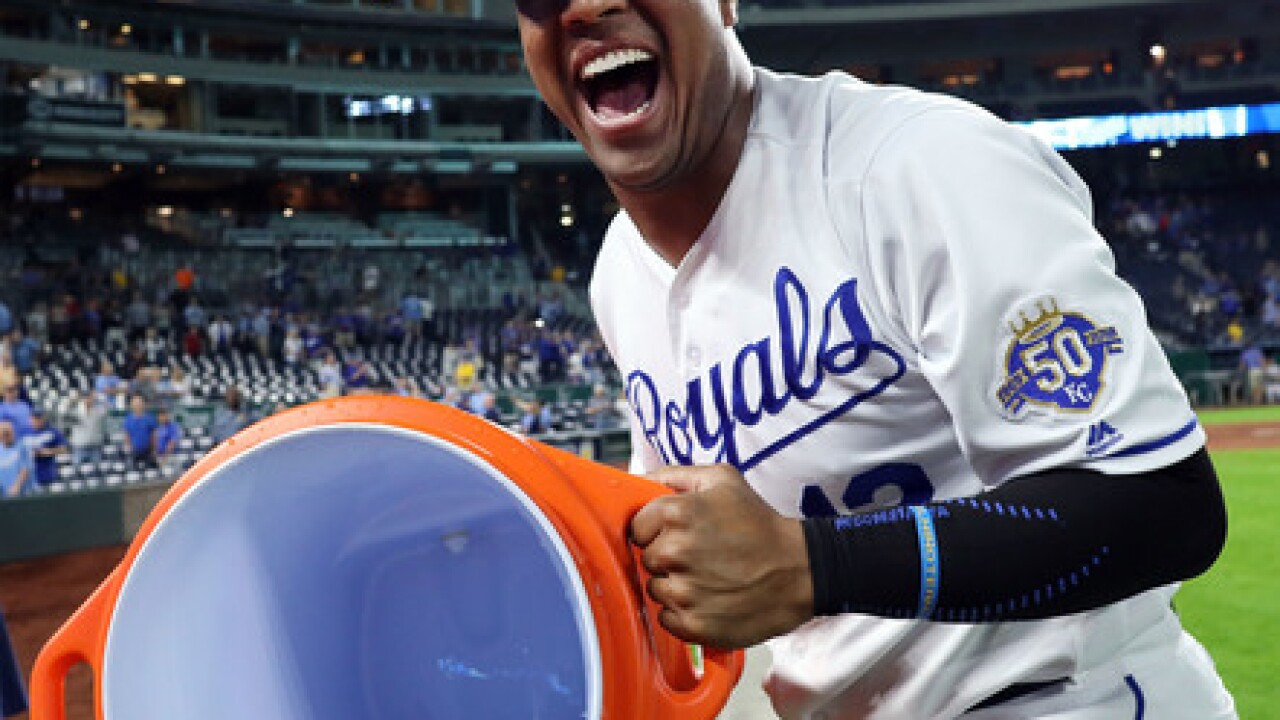 Copyright 2018 Scripps Media, Inc. All rights reserved. This material may not be published, broadcast, rewritten, or redistributed.
Jamie Squire
<p>KANSAS CITY, MO - SEPTEMBER 11: Salvador Perez #13 of the Kansas City Royals reacts after dousing water on Whit Merrifield #15 as the Royals defeat the Chicago White Sox 6-3 to win the game at Kauffman Stadium on September 11, 2018 in Kansas City, Missouri. (Photo by Jamie Squire/Getty Images)</p>

Brad Keller pitched seven strong innings to win for the fourth time in six starts, leading the Kansas City Royals to a 6-3 win over the Chicago White Sox on Tuesday night.

Whit Merrifield had two hits, two RBIs, and scored two runs for the Royals. He also stole two bases to increase his American League lead to 33 steals, including a league-best 12 of third base.

Wily Peralta picked up his 10th save in 10 chances, despite walking two in 1/3 of an inning.

The Royals have won a season-high seven straight at home -- and 10 of 11. After starting 11-35 at home before the All-Star break, the Royals are 16-10 since the break. They need to win three of their final nine games to avoid tying the franchise's worst home record (1998).

Covey has struggled against the Royals, falling to 0-7 with a 6.37 ERA in nine career starts.

The White Sox scored a run in the third when Avasail Garcia beat out an infield single, scoring Yolmer Sanchez from third. Garcia rolled it sharply to short, but Adalberto Mondesi appeared to take too long to release the throw to first.

Mondesi made up for his gaffe with an RBI single as part of a three-run third for Kansas City. Merrifield blooped a single to short right field, scoring Brian Goodwin. Mondesi followed with a bunt single that scored Rosell Herrera. A bad throw by catcher Welington Castillo sent Merrifield to third. He scored on Alex Gordon's sacrifice fly to the wall in right.

The Royals added another run in the fourth. Ryan O'Hearn led off with a triple down the right-field line and scored on Jorge Bonifacio's ground-rule double to make it 4-1.

Hunter Dozier had a two-run single in the sixth to give the Royals a five-run lead.

The White Sox pulled within three in the ninth against Royals relievers, with Tim Anderson driving in Ryan LaMarre with a single and Yoan Moncada scoring Jose Rondon on a bases-loaded walk.

JONES RETURNS
Prior to Tuesday's game, the White Sox returned RHP Nate Jones from his rehab assignment with Class A Winston-Salem, and reinstated him from the 60-day disabled list. He was placed on the disabled list June 13 with a pronator muscle strain in his right arm. He's 2-2 and a 2.55 ERA in 27 relief appearances. Jones pitched a scoreless seventh inning against the Royals.

TRAINER'S ROOM
White Sox: OF Leury Garcia remains on the disabled list with a grade-2 left hamstring. "Doing better," manager Rick Renteria said. "(He's getting) a little more activity. He's still feeling some soreness, some tightness when he's doing certain things. We're just going to try to make sure that upon or before his return he's comfortable and everything's clear. Hopefully that's coming sooner rather than later, but we're going to make sure that he's feeling good."

Royals: OF Brett Phillips, who has been out since suffering a right shoulder contusion last Wednesday in Cleveland, continues to improve, according to manager Ned Yost. Phillips took 30 more swings off the tee Tuesday. "I still don't have a definite date (for his return)," Yost said before the game. "But he's getting closer. I watched him play catch today. That's going to be a big hurdle. His arm is one of his prized possessions. Once he can get back to throwing with some accuracy and force behind it, he'll be close."

UP NEXT
White Sox LHP Carlos Rodon (6-5, 3.11 ERA) will face Royals LHP Eric Skoglund (1-5, 6.45). Rodon has lost his two starts in September after the Sox won all five of his August starts (he was 3-0 in those starts). Skoglund missed more than three months of the season (86 games) with a strained left UCL. He has pitched two scoreless innings out of the bullpen since his return. He made five rehab starts, going 0-1 with a 3.54 ERA  with three different minor league affiliates.