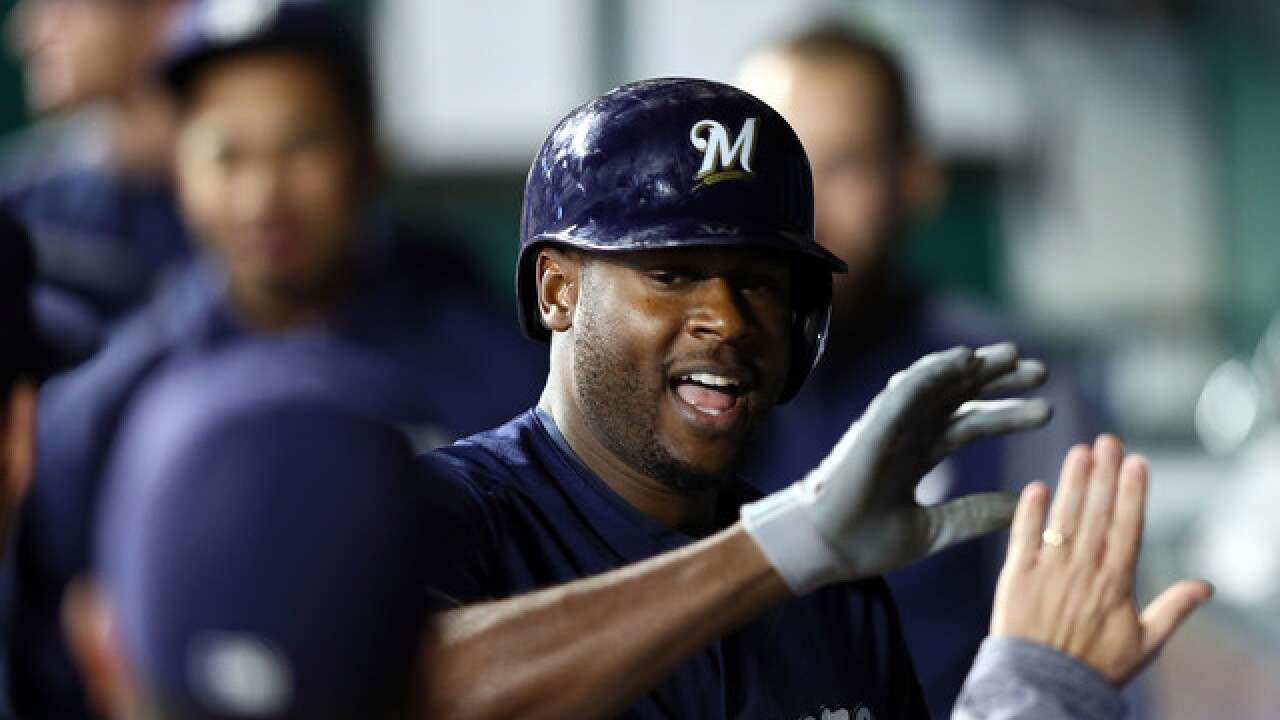 Copyright 2018 Scripps Media, Inc. All rights reserved. This material may not be published, broadcast, rewritten, or redistributed.
Jamie Squire
<p>KANSAS CITY, MO - APRIL 24: Lorenzo Cain #6 of the Milwaukee Brewers is congratulated by teammates in the dugout after hitting a solo home run during the 7th inning of the game against the Kansas City Royals at Kauffman Stadium on April 24, 2018 in Kansas City, Missouri. (Photo by Jamie Squire/Getty Images)</p>

Lorenzo Cain homered while reaching base four times in his return to Kauffman Stadium, and the Milwaukee Brewers beat the Kansas City Royals 5-2 on Tuesday night to open their two-game set.

Travis Shaw added a three-run homer for the Brewers, while Zach Davies (2-2) pitched six innings of four-hit ball. Ryan Braun had two hits, walked twice and drove in a run.

Ian Kennedy (1-3) left after allowing four runs over three shaky innings. He took a liner off his ankle in the third but finished the inning before leaving the game.

Cain walked and scored in the third and fifth before going deep off Burch Smith in the seventh. He also made a couple of nifty grabs in center field, that familiar patch of turf he presided over for seven seasons, and where he helped the Royals to two American League pennants and a World Series title.

Cain parlayed that success into an $80 million, five-year contract in free agency, returning to the club that drafted him in 2004 and eventually traded him to Kansas City in a deal for Zack Greinke.

He was certainly remembered fondly by the Royals faithful.

Cain got his first standing ovation when he sprinted onto the field for warmups, then got another one when he stepped to bat in the first inning. And when he lined his third homer of the year to right to lead off the seventh, the crowd gave him another round of applause.

Kennedy allowed six hits and a walk. He also failed to record a strikeout for the first time in 273 appearances, the second-longest active streak in the majors.

He had precautionary X-rays taken on his right foot that came back negative.

Cain said he felt some butterflies driving up to the stadium, but they evaporated when he walked into the home clubhouse. He wound up spending almost two hours talking to his former teammates. "Just a lot of hugs. A lot of sharing stories," Cain said. "A lot of good times."

Brewers: SS Orlando Arcia got the day off because of stomach pain, though his ailing ankle was fine. ... LHP Boone Logan (left triceps strain) threw a simulated game without problems and will join Double-A Biloxi on a rehab assignment. ... C Stephen Vogt (right shoulder strain) is headed to Arizona for at-bats in extended spring training. He could join a minor league club next week.

Royals: RHP Justin Grimm went on the DL with back tightness. It was part of a series of moves that included the activation of Perez (left knee strain) and Gordon (torn left hip labrum).

Royals: C Cam Gallagher and OF Paulo Orlando were optioned to Triple-A Omaha, while LHP Eric Stout was recalled from the same club to provide some bullpen help.

Brewers RHP Jhoulys Chacin moves up in the rotation to face Kansas City on Wednesday night, while RHP Chase Anderson will pitch Thursday against the Cubs. The Royals counter with RHP Jason Hammel.