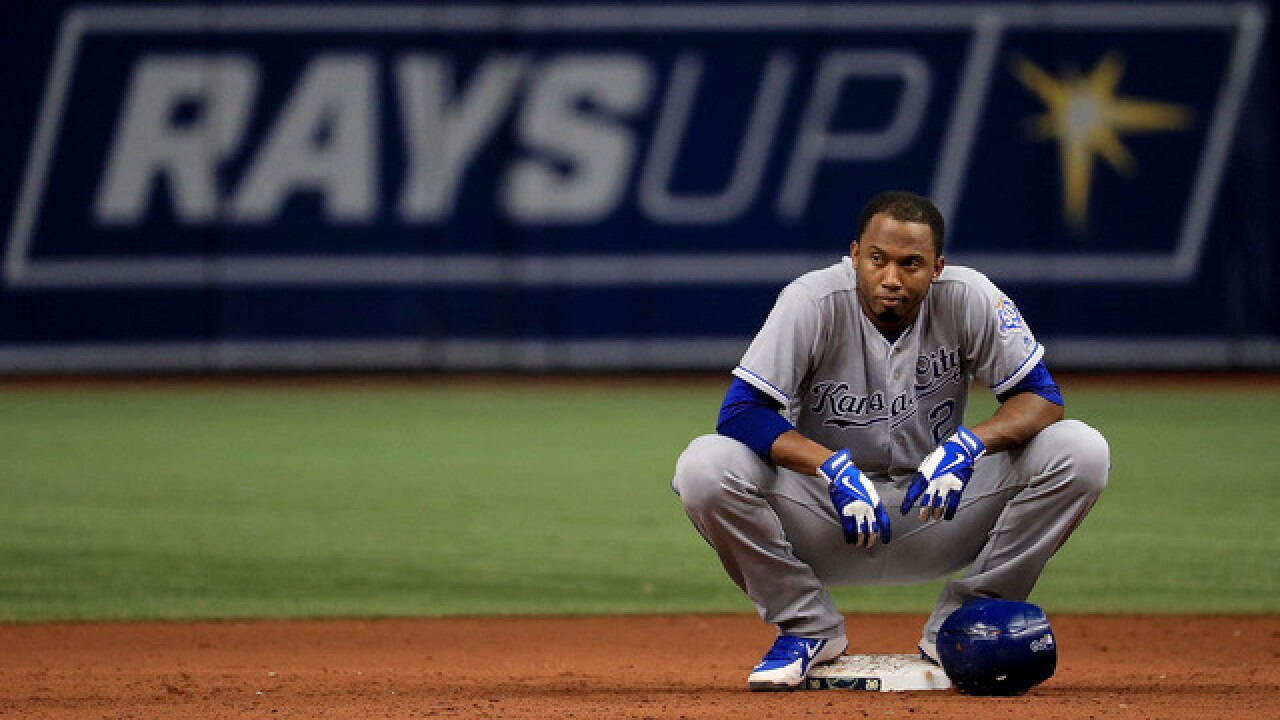 Copyright 2018 Scripps Media, Inc. All rights reserved. This material may not be published, broadcast, rewritten, or redistributed.
Mike Ehrmann
<p>ST PETERSBURG, FL - AUGUST 22: Alcides Escobar #2 of the Kansas City Royals looks on in the seventh inning during a game against the Tampa Bay Rays at Tropicana Field on August 22, 2018 in St Petersburg, Florida. (Photo by Mike Ehrmann/Getty Images)</p>

Brandon Lowe and Mallex Smith drove in two runs each, and the Tampa Bay Rays moved five games over .500 for the first time this season with a 6-3 win over the Kansas City Royals on Wednesday night.

Lowe, who drove in the first two runs with a second-inning single off Jakob Junis, and Smith were among six Rays who had two hits each.

Tampa Bay has won four straight, including the first three of a four-game seat against Kansas City.

Whit Merrifield led off the fourth with his ninth home run, the Royals' first hit of the game, extending his hitting streak to 11 games.

Hunter Dozier added a two-run homer in the eighth, the second of the game off Yonny Chirinos. Dozier's sixth homer of the season came on his 27th birthday.

Ryan O'Hearn had his first first multi-hit game for the Royals with three of their seven hits, but Rosell Herrera was thrown out at the plate for the game's final out after O'Hearn's third hit.

Sergio Romo pitched the ninth for his 18th save in 25 opportunities.

The loss clinched a sixth straight series loss for the Royals, who have lost 16 of 20 games overall.

Kevin Kiermaier, who had two hits and a walk, is hitting .357 in his last eight games, noteworthy mostly because he was batting .175 before that. "I've been pressing this whole year, trying to make up for all my lost time and all my (lack of) performance in one swing," the Rays center fielder said. "I've been trying to kill the ball all year and hit the ball 700 feet, and that's how I get myself out. You learn from things like this -- being hurt and not playing the way you want to. It's a learning experience and now I'm instituting those experiences into my approach."

Rays rookie 1B Jake Bauers, mired in a 1-for-33 slide, was out of the lineup. "He's been pressing, there's no denying it," manager Kevin Cash said. "He's frustrated with himself." Bauers entered Wednesday hitting .209 with nine homers and 34 RBIs in 66 games.

Royals: OF Jorge Bonifacio, scratched from Tuesday's lineup with lower back stiffness, was on the bench again Wednesday, but available, manager Ned Yost said.

Rays: OF Tommy Pham said he hopes to be back Friday after dislocating his right ring finger on a head-first dive back to first base on Tuesday. "It feels fine other than the swelling," Pham said.

Right-hander Tyler Glasnow (1-3, 4.10 ERA) will make his fifth start for the Rays in the season series finale Thursday night. Glasnow took his first loss Saturday at Boston, going 6 2/3 innings after a second inning in which he gave up three walks and four runs. Left-hander Danny Duffy (7-11, 4.90) is the likely if unannounced starter for Kansas City. He hasn't started since Aug. 11 because of a left shoulder impingement.