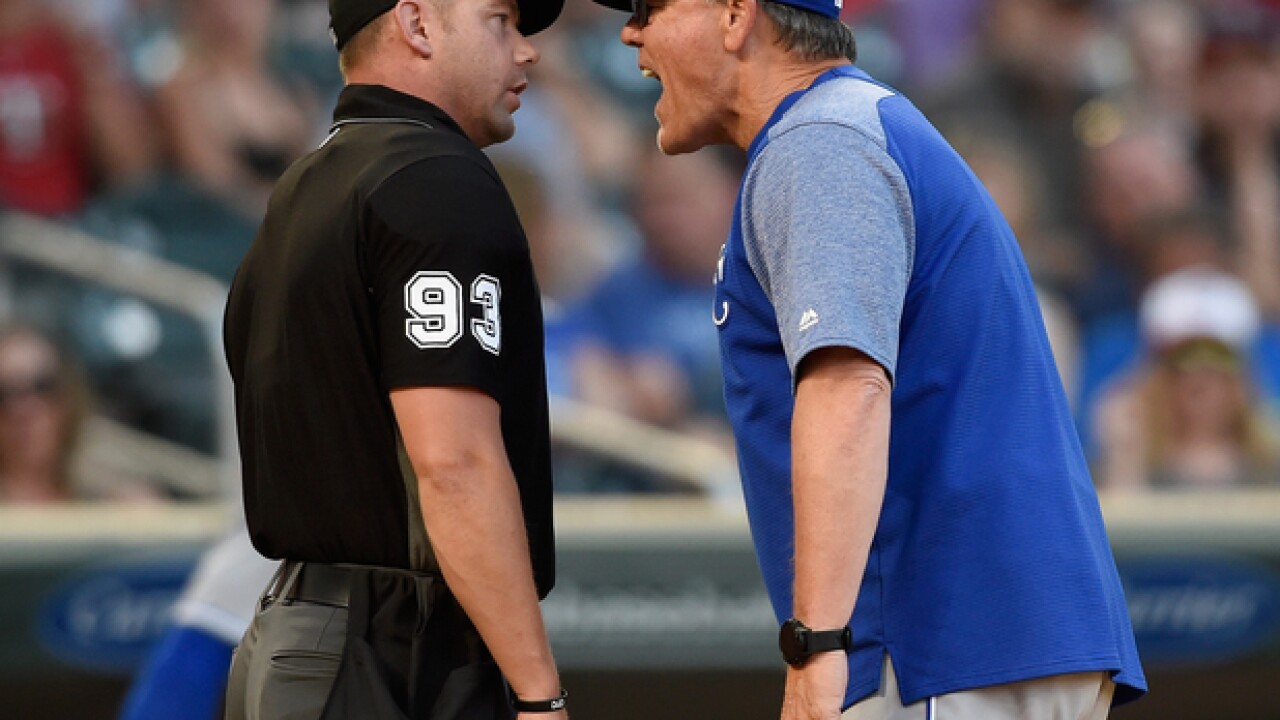 Copyright 2018 Scripps Media, Inc. All rights reserved. This material may not be published, broadcast, rewritten, or redistributed.
Hannah Foslien
<p>MINNEAPOLIS, MN - JULY 9: Manager Ned Yost #3 of the Kansas City Royals yells at home plate umpire Will Little #93 after being ejected from the game against the Minnesota Twins on July 9, 2018 at Target Field in Minneapolis, Minnesota. The Twins defeated the Royals 3-1. (Photo by Hannah Foslien/Getty Images)</p>

Eduardo Escobar had three hits and drove in the go-ahead run in the seventh to support Jose Berrios' strong outing as the Minnesota Twins beat the Kansas City Royals 3-1 on Monday night.

Berrios (9-7), elected to his first All-Star game a day earlier, allowed one run on six hits in seven innings. He struck out eight while throwing a season-high 111 pitches.

Fernando Rodney allowed a walk and hit in the ninth but secured his 20th save.

Tim Hill (1-3) surrendered both runs and got just one out in relief after starter Danny Duffy's six scoreless innings. The Royals started the game with a league-worst 5.29 relief ERA.

Duffy and Berrios nearly matched each other in a through seven innings as both teams couldn't convert scoring chances.

The Twins had a runner reach third in three of Duffy's six innings and failed to drive him in.

Berrios was named Minnesota's representative for the All-Star game and demonstrated his credentials on Tuesday mixing in his low-90s fastball with a sweeping curve.

Alex Gordon and Alcides Escobar hit back-to-back doubles to lead off the third for the only run against Berrios.

Kansas City manager Ned Yost was ejected in the fourth after Lucas Duda was called out on strikes by home plate umpire Will Little. Duda checked his swing, but apparently struck out on a called strike that appeared high and out of the zone.

It was Yost's 43rd career ejection and the first of this season.

Twins: RHP Ervin Santana (60-day disabled list, finger surgery) is scheduled to start Tuesday for Double-A Chattanooga as he tries to work his way back to the Minnesota rotation. Manager Paul Molitor said Santana is likely to move his rehab to Triple-A Rochester for one start before the All-Star break and the team will decide on his future depending on the two starts.

Royals: RHP Ian Kennedy (1-8, 5.11 ERA) will be activated from the disabled list to start Tuesday evening's game in Minnesota. Kennedy has been out since June 29 with a left oblique strain. He has gone 15 starts without a win, the longest active winless streak in the majors.

Twins: RHP Aaron Slegers (1-0, 2.38) will make his second start and third appearance of the season on Tuesday. He earned his first major league win on July 5 with one run allowed in six innings against Baltimore.