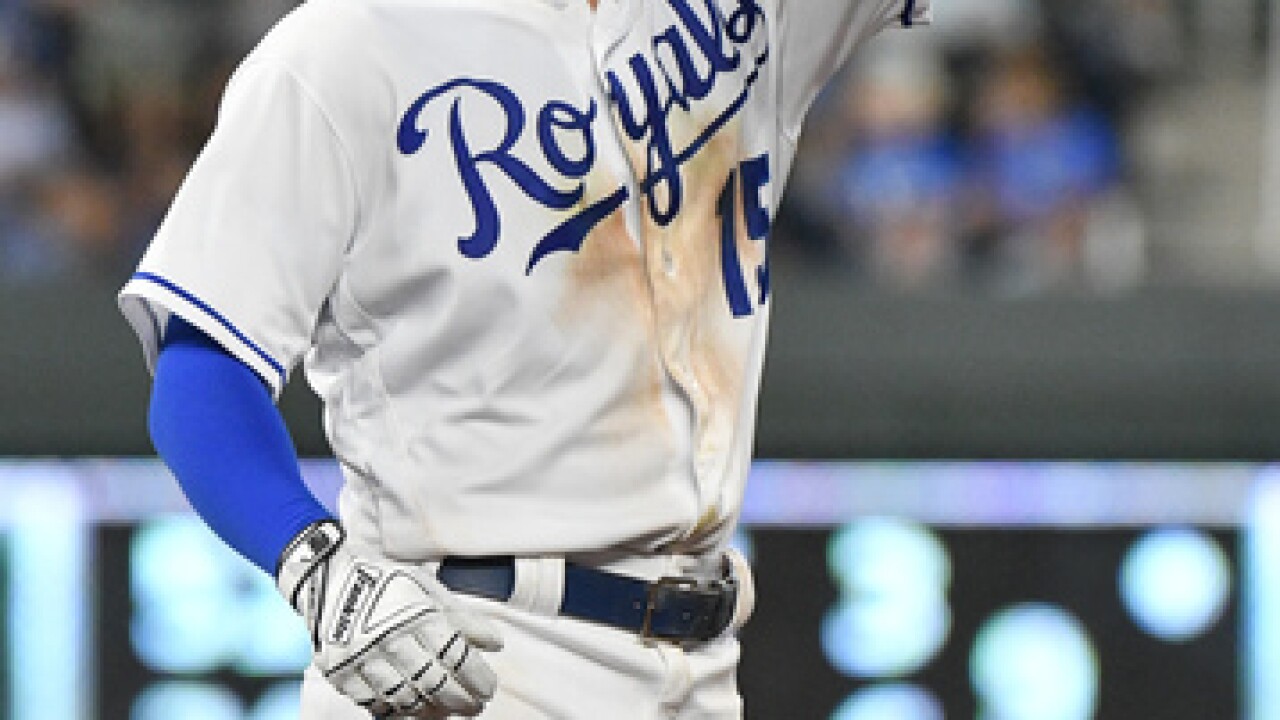 Copyright 2018 Scripps Media, Inc. All rights reserved. This material may not be published, broadcast, rewritten, or redistributed.
Ed Zurga
<p>KANSAS CITY, MO - JUNE 19: Whit Merrifield #15 of the Kansas City Royals reacts after flying out in the sixth inning against the Texas Rangers at Kauffman Stadium on June 19, 2018 in Kansas City, Missouri. (Photo by Ed Zurga/Getty Images)</p>

The Royals have lost eight straight, matching their season high, and 14 of 15. They own a major league-worst 10-28 home record and their 22-51 overall mark is the worst in franchise history after 73 games.

Hamels (4-6) picked up his first win since May 22. The run off him in the fifth was unearned and he has yet to allow an earned run in 20 innings over three starts at Kauffman Stadium.

Keone Kela pitched a spotless ninth for his 17th save in as many chances.

Kiner-Falefa, who had three hits and walked, doubled home Adrian Beltre in the third. Jurickson Profar scored the second run of the inning after Mike Moustakas' fielding error to make it 4-0.

Royals starter Jason Hammel (2-8) was removed after 5 2/3 innings, allowing four runs on nine hits and four walks. Hammel is 0-6 in nine home starts since an Aug. 20 victory over Cleveland.

Whit Merrifield led off the Royals' first with a walk, took second on a wild pitch and stole third with none out, but did not score. Salvador Perez grounded into his 12th double play after Moustakas walked to end the inning.

Alex Gordon picked up his seventh outfield assist of the season, throwing out Elvis Andrus trying to score from second on Profar's ninth-inning single.

The Rangers have more than half of their 31 victories in the second games of series. They are 16-8 in Game 2s.

Adalberto Mondesi doubled off Rangers RHP Bartolo Colon on Monday. His father Raul Mondesi went 2 for 11 off Colon. The Mondesi family is the fourth father-son combo to each record a plate appearance against the 45-year-old pitcher.

Rangers: LHP Yohander Mendez was optioned to Triple-A Round Rock after violating team rules. RHP Austin Bibens-Dirkx was recalled from the same club.

Royals: RHP Heath Fillmyer was recalled from Triple-A Omaha, where he was 4-5 with a 5.75 ERA in 13 starts. He will be used in relief.

Royals: 1B Lucas Duda (right foot plantar fasciitis) went 2 for 5 with a three-run homer and a double in Omaha's 9-2 victory Tuesday in Reno in his second minor league rehab game. OF Jorge Bonifacio, who is suspended for the first 80 games for violating the MLB's drug policy, is hitting .448 in seven games with Omaha.

Royals: RHP Jakob Junis (5-7, 4.43) has lost his past four decisions. He has never faced the Rangers.