In what could be Moose's last home game as a Royal, KC drops afternoon tilt to Tigers 8-4 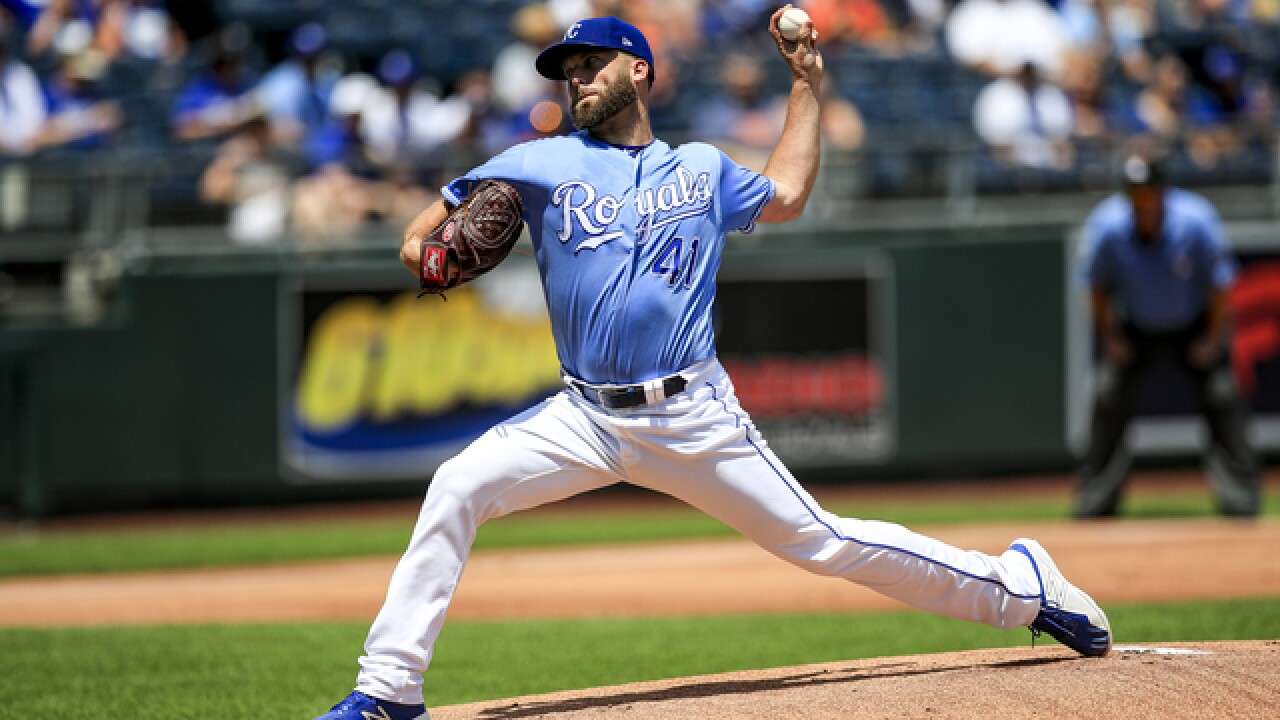 Copyright 2018 Scripps Media, Inc. All rights reserved. This material may not be published, broadcast, rewritten, or redistributed.
Brian Davidson
<p>KANSAS CITY, MO - JULY 25: Danny Duffy #41 of the Kansas City Royals pitches during the first inning against the Detroit Tigers at Kauffman Stadium on July 25, 2018 in Kansas City, Missouri. (Photo by Brian Davidson/Getty Images)</p>

When the Kansas City Royals return to Kauffman Stadium on Aug. 6 after a 10-game trip, Mike Moustakas may not be with them.

Moustakas had two hits, including a run-scoring double, in what might have been his final home game for the Royals, an 8-4 loss to the Detroit Tigers on Wednesday.

"When you've been in this game for quite some time, you realize it's a business," Moustakas said. "As long as you're going out and playing hard, we'll see what happens."

A key member of the Royals' 2015 World Series championship team, Moustakas became a free agent after last season, then signed a one-year contract with the Royals in March that includes a mutual option for 2019. With the Royals last in the AL Central at 31-70, he could be dealt before Tuesday's deadline for trades without waivers.

He understands general manager Dayton Moore is looking to the future.

"Dayton has made it clear, we're not giving Moose away," manager Ned Yost said. "If anyone thinks we're giving Moose away or it's his last game, you're going to have come with something if you want Moose playing on your team, `cause he's a big part of our team."

Several other clubs could use a third baseman who is hitting .249 with 20 homers and 62 RBIs.

"Obviously, it's a compliment," Moustakas said of interest. "But our job is not to worry about that kind of stuff. Our job is to go out and play baseball and control the things we can control on the field. All the other stuff will take care of itself."

Moustakas ended the game by striking out.

Jose Iglesias hit a three-run homer in a four-run fourth inning against Danny Duffy (6-9). Iglesias is 10 for 27 (.370) against Duffy in his big league career.

"That was huge to give us a little bit of a cushion," Tigers manager Ron Gardenhire said."We were patient enough and made Duffy get the ball over the plate, and when he did we got some big hits."

Victor Martinez had three hits, including a pair of RBI singles. He was 6 for 12 with five RBIs in the series and had consecutive games with multiple RBIs for the first time since July 17-18 last year, also at Kansas City.

Matthew Boyd (5-9) allowed two runs and seven hits in six innings, striking out seven and walking none. He had been 0-5 in seven starts since winning at Boston on June 7.

"We won the series and that's all that matters," he said.

Duffy (6-9) gave up seven runs, nine hits and two walks in 5 2/3 innings and threw wild pitches that allowed John Hicks to score the go-ahead run in a four-run fourth and Iglesias to come home in the sixth.

"I felt like I made a lot less mistakes than the line probably shows," Duffy said. "I missed my spot to Iglesias. He's a good hitter. He turned on that fastball. That was the one that really hurt me. I kind of lost my command for about seven pitches in that inning and it came back to bite me."

With three off days in the next nine days, LHP Blaine Hardy will be going back to the bullpen for a time after making nine starts. RHP Mike Fiers, LHP Francisco Liriano and RHP Jordan Zimmermann will start a weekend series against the Indians. "We're going to try to keep the four guys somewhere near a five-day schedule," Twins manager Ron Gardenhire said. "With all these days off, it's silly to give them all seven or eight days of rest. We need them to pitch. They need to. They're routine oriented. When you get them out of those routines, it's real tough. It gets all out of whack."

Royals: OF Jorge Soler (broken left toe) remains on crutches and won't be returning anytime soon after placed on the DL on June 16.

Tigers: Fiers (7-6) starts against Cleveland on Friday in the opener of a five-game homestand.

Royals: RHP Jakob Junis (5-10) starts Thursday at the New York Yankees. He is 0-7 in nine starts since a May 18 victory over the Yankees.