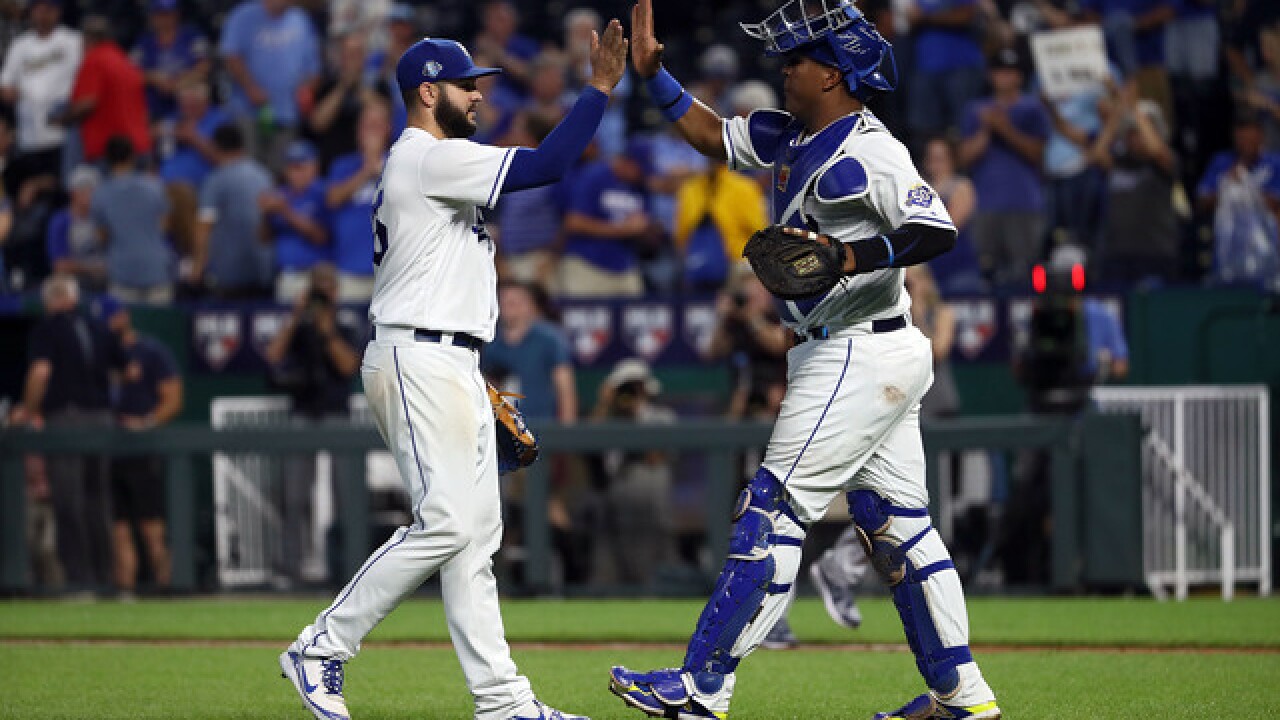 Copyright 2018 Scripps Media, Inc. All rights reserved. This material may not be published, broadcast, rewritten, or redistributed.
Jamie Squire
<p>KANSAS CITY, MO - AUGUST 28: Starting pitcher Jakob Junis #65 of the Kansas City Royals is congratulated by catcher Salvador Perez #13 after pitching his first career complete game against the Detroit Tigers at Kauffman Stadium on August 28, 2018 in Kansas City, Missouri. The Royals defeated the Tigers to win the game with a final score of 6-2. (Photo by Jamie Squire/Getty Images)</p>

The only runs Junis (7-12) allowed came in the third, when Jeimer Candelario managed a sacrifice fly, and the eighth, when JaCoby Jones went deep. Otherwise, the Royals' young right-hander was brisk and efficient, striking out seven without a walk to win for only the second time since May 18.

Junis had never thrown a complete game in the minors, either.

Mondesi went deep off Matthew Boyd (8-12) to lead off the third inning, and the Royals wound up batting around. Jorge Bonifacio hit a sacrifice fly, Hunter Dozier added a two-run double and Alcides Escobar wrapped up the big inning with a two-out single that gave Kansas City a 5-1 lead.

It was hardly surprising that Junis dominated the Tigers. He's faced them four times this season, pitching at least seven-plus innings and winning each of the starts.

The three previous outings came in April and May, when Junis was off to a hot start. He struggled mightily throughout June, eventually landing on the disabled list with lower back inflammation the first week of July, but has been solid in eight starts since his return to the rotation.

Boyd, who threw six shutout innings against the White Sox his last time out, wound up allowing five runs on seven hits and three walks in six innings. The Tigers' right-hander dropped to 3-7 in 13 career starts against Kansas City, and he's just 8-21 in 41 starts on the road.

Detroit could have used a gem from him as they opened a nine-game trip. They've lost four straight and five of six, their offense failing to score more than three runs in any of the defeats.

JONES RETURNS
Jones (right hamstring strain) was back in the lineup for the first time since hitting the DL on Aug. 13. OF Mike Gerber was optioned to Triple-A Toledo on Sunday to create a roster spot for him.

TRAINER'S ROOM
Tigers: LHP Daniel Norris (left groin strain) could start Saturday against the Yankees in New York, manager Ron Gardenhire said. Norris has been sharp in rehab outings at Toledo after compiling a 5.87 ERA in five appearances for Detroit before getting hurt.

Royals: OF Brian Goodwin (left groin strain) will rejoin the club when rosters expand Sept. 1, manager Ned Yost said. ... OF Jorge Soler (left toe fracture) will finish the season with Triple-A Omaha before rejoining the Royals. That would mean Soler is expected back Sept. 4.

UP NEXT
Tigers RHP Michael Fulmer tries to build on a solid start in his return from the disabled list, when he threw 4 2/3 scoreless innings against the White Sox last Friday. The Royals counter with LHP Danny Duffy as the teams wrap up their two-game series with a matinee Wednesday.