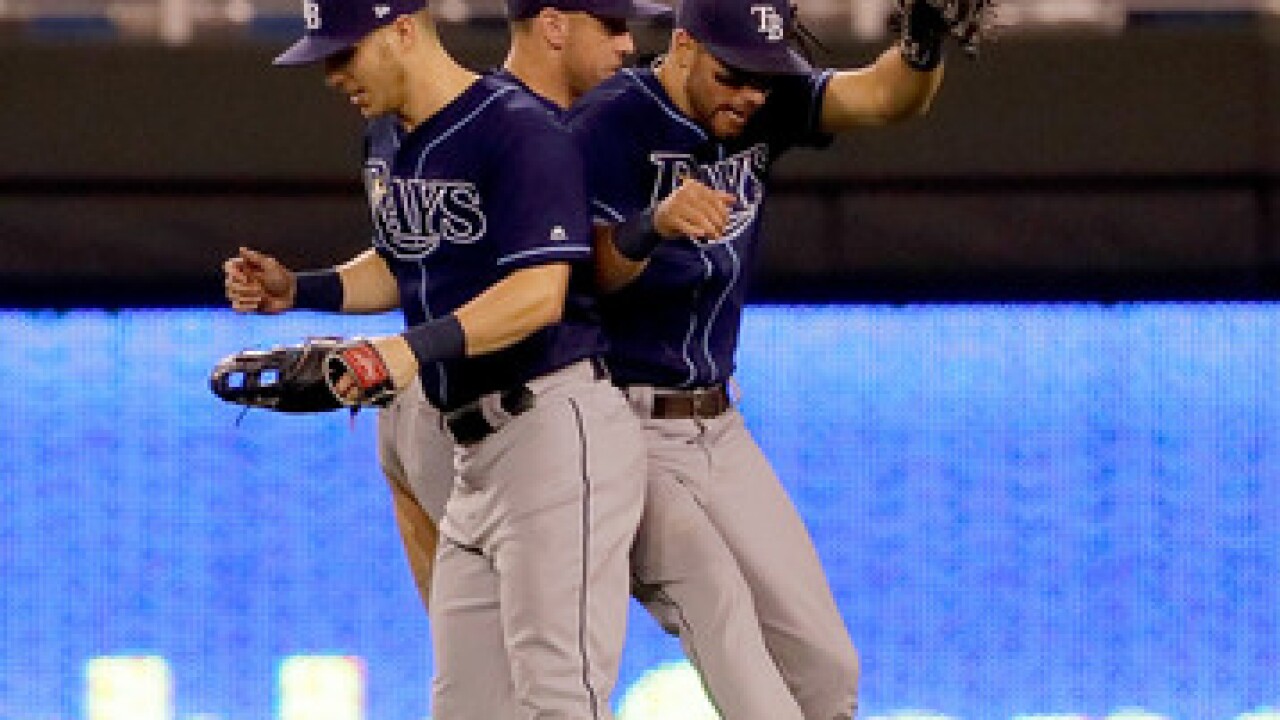 Adeiny Hechavarria danced around catcher Salvador Perez with an inventive slide at home plate to score the go-ahead run, and the Tampa Bay Rays beat the Kansas City Royals 2-1 on Monday night.

Hechavarria ran through third base coach Matt Quatraro's stop sign  on Matt Duffy's single to right field in the sixth inning, sidestepped Perez to the right, then dived back toward the plate. Hechavarria faked toward the dish with his right hand, then jabbed his left hand just past Perez's outstretched glove to tag the plate. Umpire Rob Drake immediately signaled him safe.

Ryan Yarbrough (3-2) allowed one run over five innings for Tampa Bay, and Duffy had three hits and drove in both runs. Alex Colome worked the ninth for his seventh save in nine opportunities.

Eric Skoglund (1-3) permitted two runs on seven hits, walked none and struck out four in 7 2/3 innings, his longest career outing. He tied a Royals' record with six assists by a pitcher.

Whit Merrifield had three hits for his seventh multihit game in the past 14 and homered into the Rays' bullpen to lead off the third.

Yarbrough gave up five hits and picked up his first career victory as a starter. Five Rays relievers held the Royals to one hit over the final four innings.

Jon Jay tripled with one out in the ninth, but Colome struck out Ryan Goins and retired Alex Gordon on a grounder to end the game.

C.J. Cron doubled in the first, extending his on-base streak to 20 games, and scored on Duffy's single to right. Cron later hit a pitch from Skoglund after it bounced in front of home plate, knocking a line drive that was caught in left field in the sixth.

Yarbrough wriggled out of a bases-loaded jam with one out in the fifth. Alcides Escobar and Merrifield singled and Soler walked on four pitches.  Mike Moustakas bounced a first pitch back to Yarbrough to start an inning-ending double play.

Rays: RHP Andrew Kittredge was optioned to Triple-A Durham. Kittredge was 1-2 with a 9.72 ERA in 13 appearances. They recalled RHP Hunter Wood from Durham for his second stint. The Rays will activate LHP Anthony Banda on Tuesday and start him against the Royals. Banda went 4-2 in seven starts at Durham.

Royals: IF-OF Hunter Dozier was recalled from Triple-A Omaha and made his first big league start at first base. Dozier, a 2013 first-round pick, played in eight games with the Royals in 2016, playing right field in seven and DHing in the other. He was hitting .254 in 35 games with the Storm Chasers.

Rays: RHP Nathan Eovaldi was scratched from a minor league rehab start with a right rib muscle strain. He's been on the disabled list all season with loose fragments in his pitching elbow.

Rays: Banda will make his Tampa Bay debut after appearing in eight games last year with Arizona. He was acquired in a six-player, three-team trade in February, which also included the Yankees.

Royals: RHP Ian Kennedy will try to rebound from a loss Thursday at Baltimore, where he allowed nine runs in four innings.