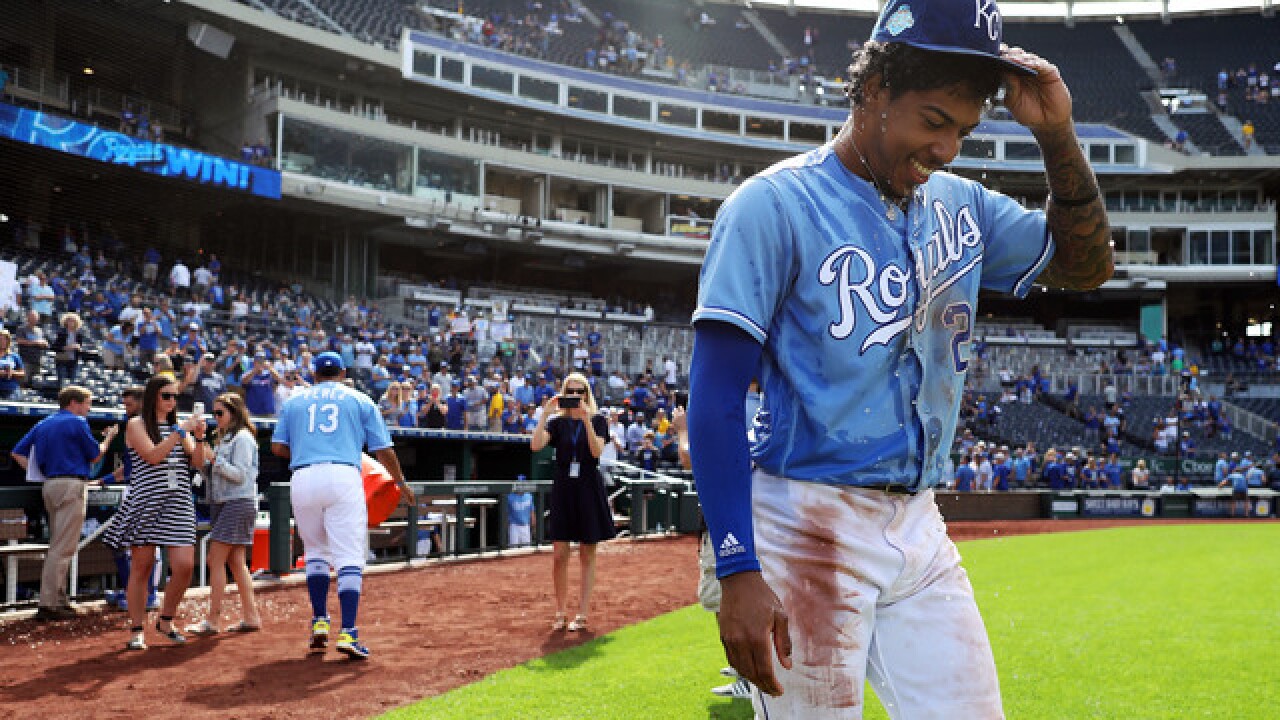 Copyright 2018 Scripps Media, Inc. All rights reserved. This material may not be published, broadcast, rewritten, or redistributed.
Jamie Squire
<p>KANSAS CITY, MO - AUGUST 29: Adalberto Mondesi #27 of the Kansas City Royals smiles after being doused with water by catcher Salvador Perez #13 after the Royals defeated Detroit Tigers 9-2 to win the game against the Detroit Tigers at Kauffman Stadium on August 29, 2018 in Kansas City, Missouri. (Photo by Jamie Squire/Getty Images)</p>

Adalberto Mondesi was identified as the Kansas City Royals' top prospect several years ago based primarily on his blazing speed, advanced defense and raw athleticism.

The youngster is starting to flash some power, too.

Mondesi homered for the second straight game, this time a two-run shot as part of a four-RBI performance, and the Royals beat the Detroit Tigers 9-2 on Wednesday to sweep a two-game set.

"He's starting to come into his own a little bit," Royals manager Ned Yost said. "He's like a thoroughbred. He's a quick-twitch, extremely explosive guy."

Mondesi made his big league debut as a 19-year-old during the 2015 World Series, but he struggled the past two seasons to stick with the Royals. He seems to have broken through, though, as Kansas City begins a massive rebuilding project based around talented prospects like him.

"He's been up here and stayed here and that's big," said Alex Gordon, who also hit a two-run shot on Wednesday. "We've seen in spring training his talent. Even better things to come."

Danny Duffy (8-11) allowed both of his hits and his only run in the first inning, when Mikie Mahtook drove in Jose Iglesias with a two-out single. The left-hander labored through the frame but breezed the rest of the way, striking out six while working around a trio of walks.

Brett Phillips had a pair of RBIs as the Royals, who have struggled to score much of the season, pounded Tigers starter Michael Fulmer (3-10) in his second outing off the disabled list.

Fulmer, who tossed 4 2/3 shutout innings against the White Sox last week, allowed seven runs on eight hits before he was chased with two outs in the fourth. Fulmer is winless in his last seven starts, losing five of them, since beating the Twins on June 14.

"I got ahead of guys, and I felt my stuff was OK," he said. "I can live with the mistakes getting hit. But the two home runs were out of the zone. One was up and one was down. It's the good pitches I thought I made that got hit too. You just have to get them credit."

Mondesi began Kansas City's onslaught with his homer in the second, his second in as many days. Gordon went deep in the third, and the Royals added on with two triple and two doubles in the fourth.

The Royals kept tacking on runs against the Detroit bullpen, sending the Tigers to their fifth consecutive loss. They've now lost 26 of their last 32 on the road.

Mahtook provided the lone highlight when he homered off Wily Peralta in the ninth.

Much like Fulmer, Duffy had been struggling much of the past month, going winless in three starts around a stint on the DL. But he was in complete control after the first inning, the only runners he allowed coming on a pair of walks and an error by third baseman Hunter Dozier.

Duffy's performance was rather unexpected, too. He'd lost three straight to the Tigers, including two rough outings earlier this season, and was 3-8 with a 6.01 ERA in day games.

"It was a grind," Duffy said. "The offense took care of business and it's easy to go out there and throw strikes with the runs they provided me."

DUDA TRADED
After the game, the last-place Royals traded 1B Lucas Duda to the first-place Atlanta Braves for cash considerations. Duda signed a $3.5 million, one-year deal with Kansas City this past offseason. He was hitting .242 with 13 homers and 48 RBIs.

TRAINER'S ROOM
Tigers: Iglesias left in the fourth inning with a lower abdomen strain. He singled in the first inning and flied out to center field in the third. Jim Adducci replaced him in the lineup.
Royals: RHP Ian Kennedy (left oblique strain) was scheduled to make his first rehab start at Triple-A Omaha on Wednesday night. ... OF Bubba Starling, a former first-round pick, will begin his rehab stint after a dislocated finger at rookie-level Idaho Falls.

UP NEXT
The Tigers head to New York on Thursday night with LHP Francisco Liriano (3-9, 4.82 ERA) facing Yankees LHP J.A. Happ (15-6, 3.80) in the opener of a four-game set. The Royals get the day off before facing Baltimore on Friday night in a matchup of the two worst teams in the majors.