KC drops series in Cleveland, falls to 14 games below .500 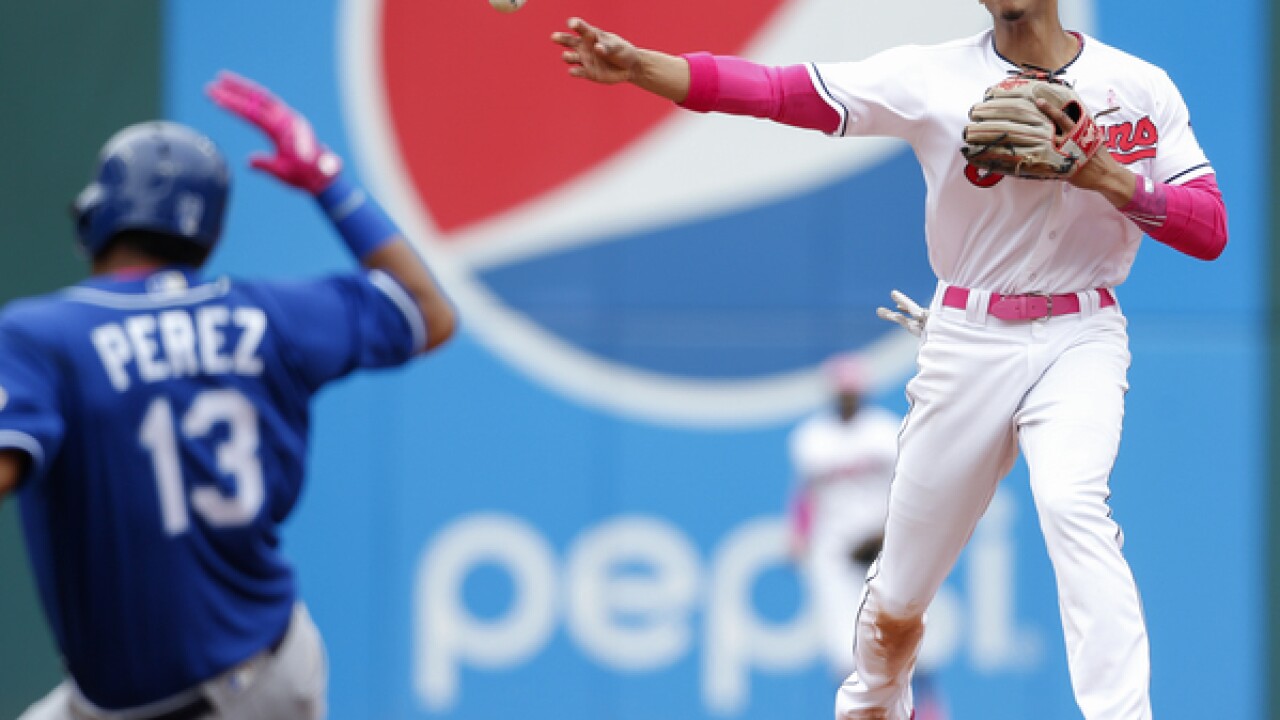 Copyright 2018 Scripps Media, Inc. All rights reserved. This material may not be published, broadcast, rewritten, or redistributed.
Ron Schwane
<p>CLEVELAND, OH - MAY 13: Erik Gonzalez #9 of the Cleveland Indians forces out Salvador Perez #13 of the Kansas City Royals at second base and throw out Whit Merrifield #15 at first base to complete the double play during the fourth inning at Progressive Field on May 13, 2018 in Cleveland, Ohio. The Indians defeated the Royals 11-2. (Photo by Ron Schwane/Getty Images)</p>

The reigning Cy Young Award winner gave up two unearned runs in seven innings, scattering eight hits. Kluber (6-2) was backed by four hits from Yan Gomes, including a three-run homer. Jose Ramirez also hit a three-run shot and Michael Brantley had a two-run homer as the Indians had 15 hits.

Gomes hit a fourth-inning home run off Danny Duffy (1-5),  doubled in the second and singled in the third and sixth to match his career high for hits.

Ramirez's homer capped a five-run second inning while Brantley homered in the seventh.

Francisco Lindor extended his hitting streak to a career-high 14 games with three hits, including an RBI single in the third. Lindor had two homers and two doubles Saturday. He got off to an inauspicious start Sunday, walking to home plate in the first inning wearing the wrong batting helmet.

A switch-hitter, Lindor had on the helmet he usually uses when he hits left-handed -- with a protective flap on the right side. But he was facing the left-hander Duffy and was going to hit right-handed.

Lindor quickly realized the mistake, exchanged helmets with a bat boy and smiled when he returned to the batter's box. Lindor flied out. Helmets with flaps on the side facing the pitcher have been mandatory for all players making their major league debuts since 1983.

Cleveland strung together a single, a double, two walks, a hit batter, a wild pitch and RBI ground balls by Greg Allen and Brantley in the second to take a 2-0 lead. Ramirez's 12th homer of the season pushed the lead to five.

After striking out Brandon Guyer to finally end the inning, a frustrated Duffy tossed a cooler in the dugout but his day would only get worse. Lindor drove in another run in the following inning before Gomes hit his fifth homer of the season.

Duffy allowed nine runs in 3 1-3 innings. His fortunes were much different than his previous outing when the Royals scored 10 runs in the top of the first. Duffy allowed one run in 5 1-3 innings for his first win of the season.

Royals: RHP Justin Grimm (stiff lower back) began a rehab assignment with Triple-A Omaha. He appeared in 10 of Kansas City's first 19 games before being placed on the disabled list on April 24.

Indians: CF Bradley Zimmer (bruised chest) was out of the lineup again and a trip to the disabled list is possible if he's not ready in the next day or two. Zimmer has appeared in one game since crashing into the wall at Yankee Stadium on May 5.