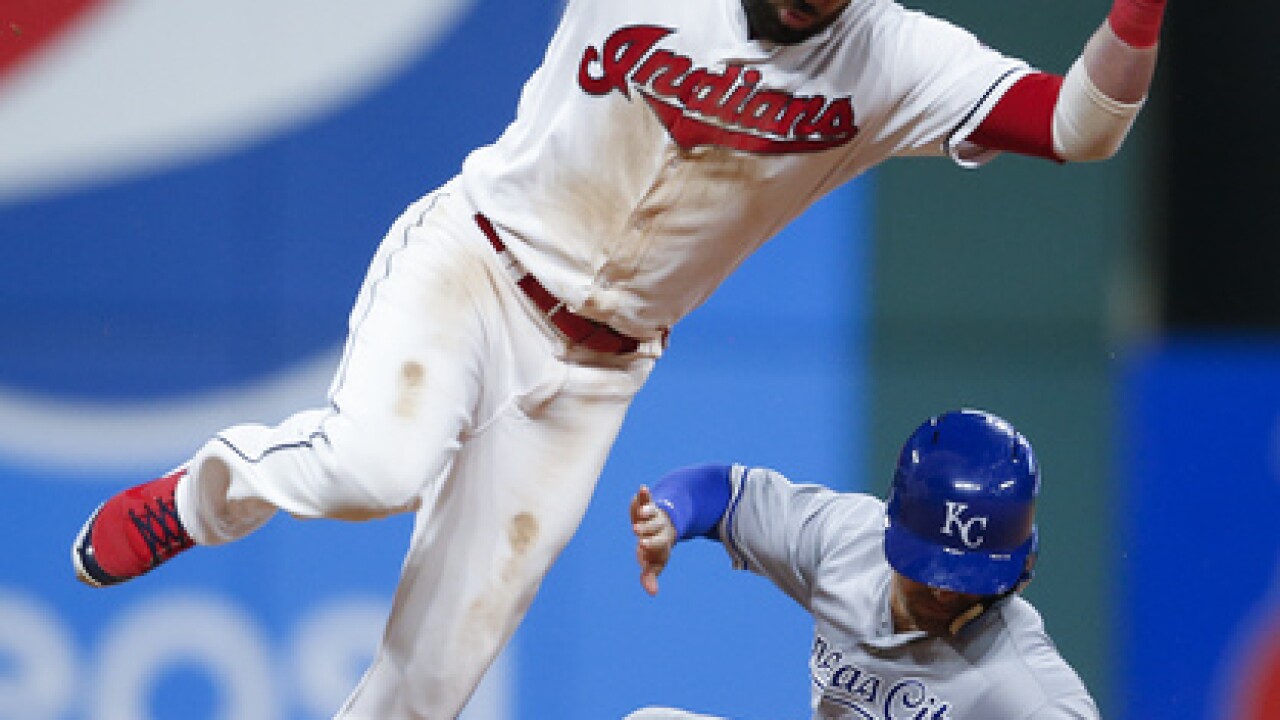 Copyright 2018 Scripps Media, Inc. All rights reserved. This material may not be published, broadcast, rewritten, or redistributed.
Ron Schwane
<p>CLEVELAND, OH - MAY 11: Jason Kipnis #22 of the Cleveland Indians forces out Whit Merrifield #15 of the Kansas City Royals at second base during the fifth inning at Progressive Field on May 11, 2018 in Cleveland, Ohio. The Royals defeated the Indians 10-9. (Photo by Ron Schwane/Getty Images)</p>

Michael Brantley had three hits, drove in two runs and broke a 2-all tie with an RBI double in the sixth.

Mike Clevinger (3-0) allowed two runs in 7 2/3 innings as the Indians won for just the second time in their last seven games.

Both of Lindor's home runs came batting left-handed. He homered down the right-field line off Junis in the third, tying the score at 2-all. Lindor homered into the bleachers in left-center off Kevin McCarthy in the seventh, extending Cleveland's lead to 5-2.

Lindor, who has struggled defensively, started a double play to help Clevinger escape a potential jam in the second. He's committed eight errors, including four in the last seven games, after making 10 last season.

Salvador Perez's run-scoring grounder in the first put the Royals up 1-0, but Brantley's single tied it in the bottom of the inning.

Jay and Soler had consecutive doubles with one out in the third to put Kansas City back ahead, before Lindor's first homer tied it again.

Lindor and Brantley opened the sixth with doubles, and Yonder Alonso had an RBI single with two outs to give Cleveland a 4-2 lead.

After Lindor's one-out homer in the seventh, Edwin Encarnacion had an RBI single four batters later to push the Indians' lead to 6-2.

The start of the game was delayed by rain for 75 minutes. Several seagulls descended on the ballpark in the sixth inning, but quickly left the premises.

Royals: RHP Justin Grimm (lower back stiffness), who has been on the 10-day disabled list since April 24, could begin a rehab assignment next week.

Indians: RF Tyler Naquin on the 10-day disabled list with a strained left hamstring. The injury occurred while he was running the bases Friday. Manager ... CF Bradley Zimmer was scratched from the lineup because he's still dealing with a bruised chest after crashing into the wall at Yankee Stadium last weekend. Zimmer has only played in one game in the last week and.is still sore when swinging the bat.