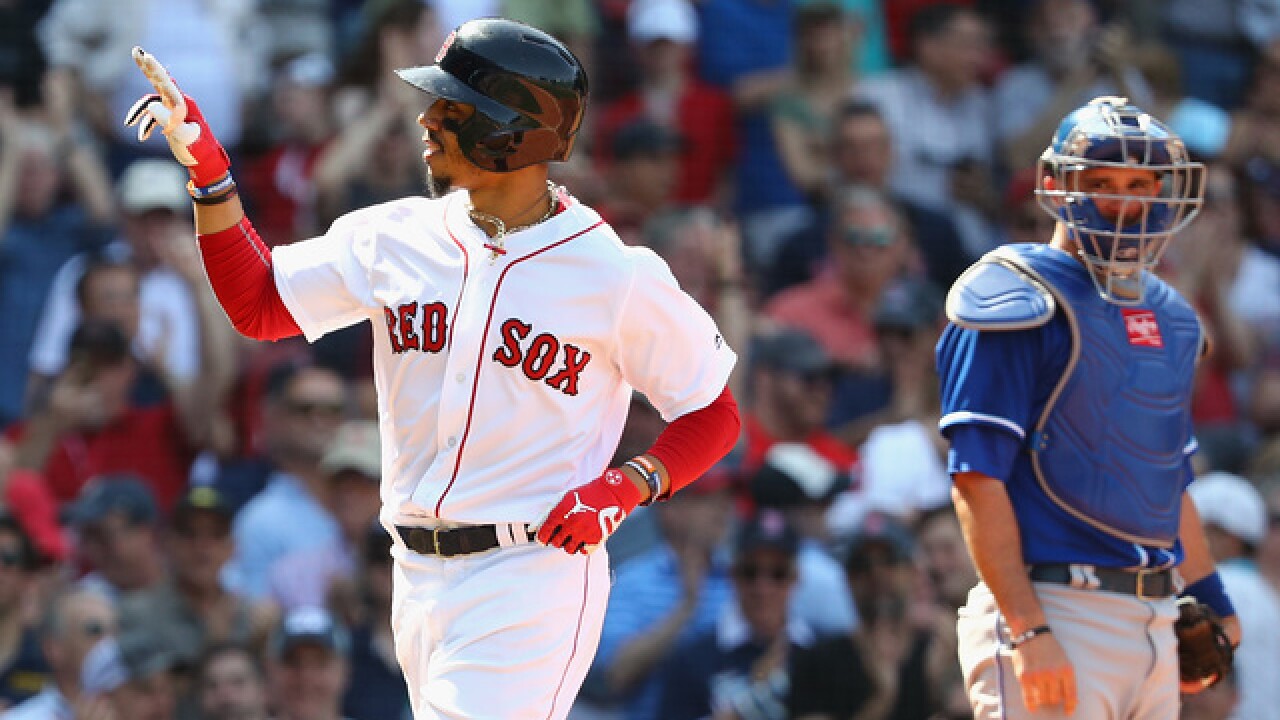 Copyright 2018 Scripps Media, Inc. All rights reserved. This material may not be published, broadcast, rewritten, or redistributed.
Tim Bradbury
<p>BOSTON, MA - MAY 02: Mookie Betts #50 of the Boston Red Sox celebrates after hitting a solo home run during the seventh inning against the Kansas City Royals at Fenway Park on May 2, 2018 in Boston, Massachusetts. (Photo by Tim Bradbury/Getty Images)</p>

Mookie Betts heard the name Ted Williams, and that was enough for him.

It was the fourth three-homer game for the 25-year-old Betts, snapping a tie with Williams for most three-homer games in franchise history. Betts broke into the majors with the Red Sox in 2014, so he was well aware of the significance of the connection to the Hall of Famer.

"It's pretty cool," Betts said. "He hit .400 in a year and did a whole bunch of things I haven't done. Just to know my name is amongst his is pretty cool."

Betts also hit three homers in a 10-1 victory at the Angels on April 17. He is the first player in major league history with four three-homer games before turning 26, according to STATS.

"We're trying to shut them down just to get Mookie another at-bat," Red Sox starter Drew Pomeranz said, smiling. "When he gets going like that, that's pretty cool."

AL East-leading Boston won for the third time in four games after losing 7-6 in 13 innings on Tuesday night.

Cheslor Cuthbert homered for Kansas City, and Drew Butera had a two-run double. The Royals were trying for consecutive wins for just the second time this season.

Pomeranz (1-1) worked six innings, giving up all three of his runs in the first two frames. Craig Kimbrel struck out the side in the ninth for his eighth save and 299th of his career a day after his first blown opportunity this season.

Unlike most of the early season games in Fenway Park, there was a summer-like feel with a game-time temperature of 86 degrees under bright-blue skies.

Betts connected again in the fifth, sending a drive just inside the left-field foul pole into the Green Monster seats. His third homer of the game also came against Duffy, driving a 1-2 pitch over the wall in center in the seventh.

"I'm searching for outs. I'm tired of going out there and getting my butt kicked," said Duffy, who is winless in his career against the Red Sox.

Kansas City closed to 5-4 on Cuthbert's homer in the eighth, but Boston finished it off from there.

Royals: 3B Mike Moustakas returned to the starting lineup after just pinch-hitting on Tuesday. He was hit on the right forearm by a pitch in the series opener.

Red Sox: Betts started for the first time since leaving Saturday's game with a tight right hamstring. ... LHP Eduardo Rodriguez was placed on the family medical leave list and RHP Marcus Walden was recalled from Triple-A Pawtucket. Manager Alex Cora doesn't know if the lefty will miss his turn in the rotation.

The Royals scored a strange run in the first.

With Jorge Soler on second and Whit Merrifield on third and one out, Salvador Perez hit a fly ball near the triangle in center.

Merrifield waved Soler back as he raced home. Soler was doubled up.

Perez was credited with a sacrifice fly because Merrifield crossed before the double play was completed.

Boston right-hander Joe Kelly returned after serving a six-game suspension for his part in a brawl with the Yankees last month. He pitched one scoreless inning.

Royals: LHP Eric Skoglund (1-2, 6.23 ERA) starts Thursday afternoon at home against Detroit. He allowed one run in a career-high seven innings in his previous start.