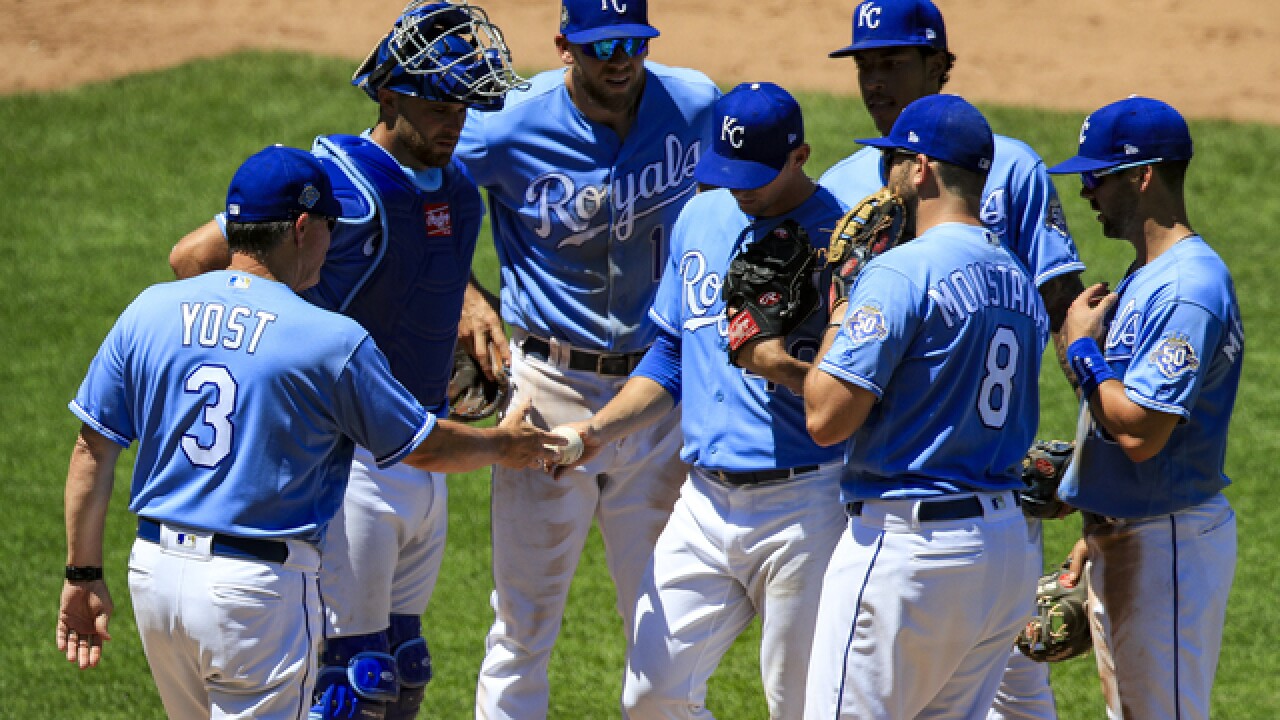 Copyright 2018 Scripps Media, Inc. All rights reserved. This material may not be published, broadcast, rewritten, or redistributed.
Brian Davidson
<p>KANSAS CITY, MO - JULY 08: Heath Fillmyer #49 of the Kansas City Royals is taken out of the game by manager Ned Yost #3 during the fifth inning against the Boston Red Sox at Kauffman Stadium on July 8, 2018 in Kansas City, Missouri. (Photo by Brian Davidson/Getty Images)</p>

Porcello (11-3) allowed three runs on nine hits before leaving after 111 pitches. He struck out nine, matching his season high, and walked one. Craig Kimbrel got the final two outs for his 27th save in 29 chances.

Benintendi extended his on-base streak to 11 straight -- seven hits and four walks -- before striking out in the eighth.

Drew Butera singled and Whit Merrifield doubled to lead off the Kansas City seventh, but Porcello stranded them by striking out Jorge Bonifacio and Mike Moustakas and retiring Lucas Duda on a fly ball.

Eduardo Nunez drove in two Boston runs with singles in the fourth and seventh. Mitch Moreland walked with the base loaded in the fifth and singled in a run in the seventh. Xavier Bogaerts also contributed an RBI-double in a three-run seventh.

Merrifield singled in a run in the ninth for his first five-hit game. Bonifacio drove in two KC runs with a third-inning double.

Heath Fillmyer (0-1), who was making his first big league start, allowed four runs, one unearned, on eight hits and three walks. Fillmyer was filling in for Jakob Junis, who went on the disabled list with back tightness.

The Royals, who turned five double plays, lost their ninth straight to match their longest of skid this season and are 4-27 in their last 31 games. They are 38 games below .500 for the first time since ending the 2006 season 62-100.

The Royals signed RHP Kaito Yuki, 16, from Osaka, Japan. He opted to sign a professional contract in lieu of going to high school.

Royals SS Alcides Escobar was not in the lineup after starting the previous 421 games, which was the longest active streak in the majors.

Red Sox: RHPs Ryan Brasier and William Cuevas were promoted from Triple-A Pawtucket. Brasier last pitched in the majors in 2013 with the Angels and spent last year in Japan. Cuevas was 5-5 with a 3.65 ERA in 15 starts with Pawtucket.

Red Sox: DH J.D. Martinez was held out of the lineup after fouling pitches off his right foot and left calf on Saturday. "He's a little banged up," Red Sox manager Alex Cora said. "It made sense to stay away from him. We'll give him one day and he'll be back in the starting lineup tomorrow."

Royals: RHP Jakob Junis (back tightness) was put on the DL, retroactive to July 3.