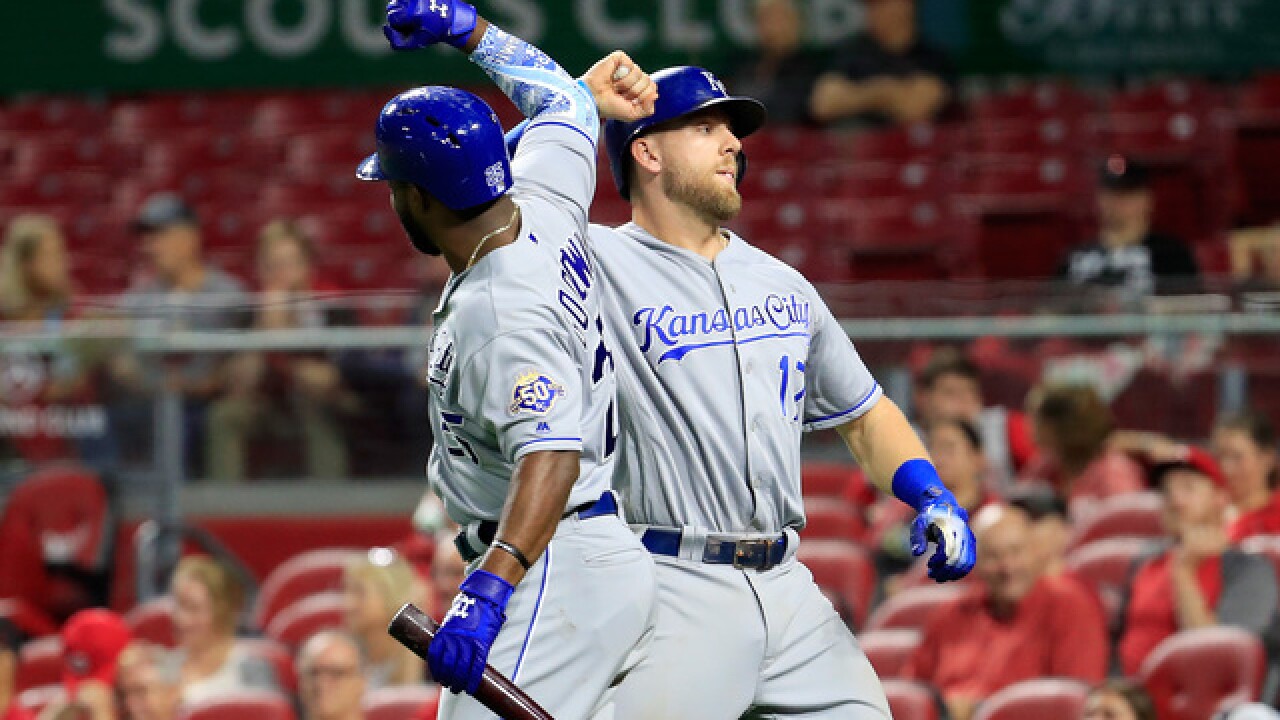 Copyright 2018 Scripps Media, Inc. All rights reserved. This material may not be published, broadcast, rewritten, or redistributed.
Andy Lyons
<p>CINCINNATI, OH - SEPTEMBER 25: Hunter Dozier #17 of the Kansas City Royals celebrates with Brian Goodwin #25 after hitting the game winning home run in the 9th inning against the Cincinnati Reds at Great American Ball Park on September 25, 2018 in Cincinnati, Ohio. The Royals won 4-3. (Photo by Andy Lyons/Getty Images)</p>

Hunter Dozier led off the ninth inning with a tie-breaking home run, lifting the Kansas City Royals to a 4-3 win over the Cincinnati Reds on Tuesday night.

Dozier's 11th homer of the season, off Raisel Iglesias (2-5), left Kansas City needing two wins in its last five games to avoid tying the franchise record of 106 losses in a season, set in 2005. The Royals have won three of their last four games, after a five-game losing streak.

Kevin McCarthy (5-4) worked out of a bases-loaded, no-out jam in the eighth and earned the win. The Reds loaded the bases again in the ninth with two outs against Wily Peralta. But Joey Votto grounded out and Peralta earned his 14th save.

Ryan O'Hearn hit his 12th homer of the season, a two-run shot off Matt Harvey, in the fourth inning, to give the Royals a 3-0 lead. The Reds' Dilson Herrera delivered a pinch-hit, two-run homer in the fifth before Scooter Gennett tripled and Phillip Ervin drove him in with the game-tying run in the seventh.

The slumping Reds have lost four straight, all against teams with worse records than their own. The Reds have also lost five of six, and their interleague losing streak reached seven games.

Harvey overcame a 51-minute rain delay with one out in the bottom of the third inning. He lasted five innings and gave up six hits and three runs with six strikeouts. The former Mets' right-hander didn't allow a walk.

The delay cost Eric Skoglund a shot at his second win of the season and first since April 28 against the White Sox. The Royals rookie, making his 12th start of 2018 and fourth since missing three months with a strained ulnar collateral ligament, didn't return when play resumed.

UP NEXT
Royals: RHP Heath Fillmyer (3-2) will make his first career start against the Reds in his final 2018 start.

Reds: LHP Cody Reed (1-2) makes his first career start against the Royals, who made him their second-round pick in the June 2013 draft.