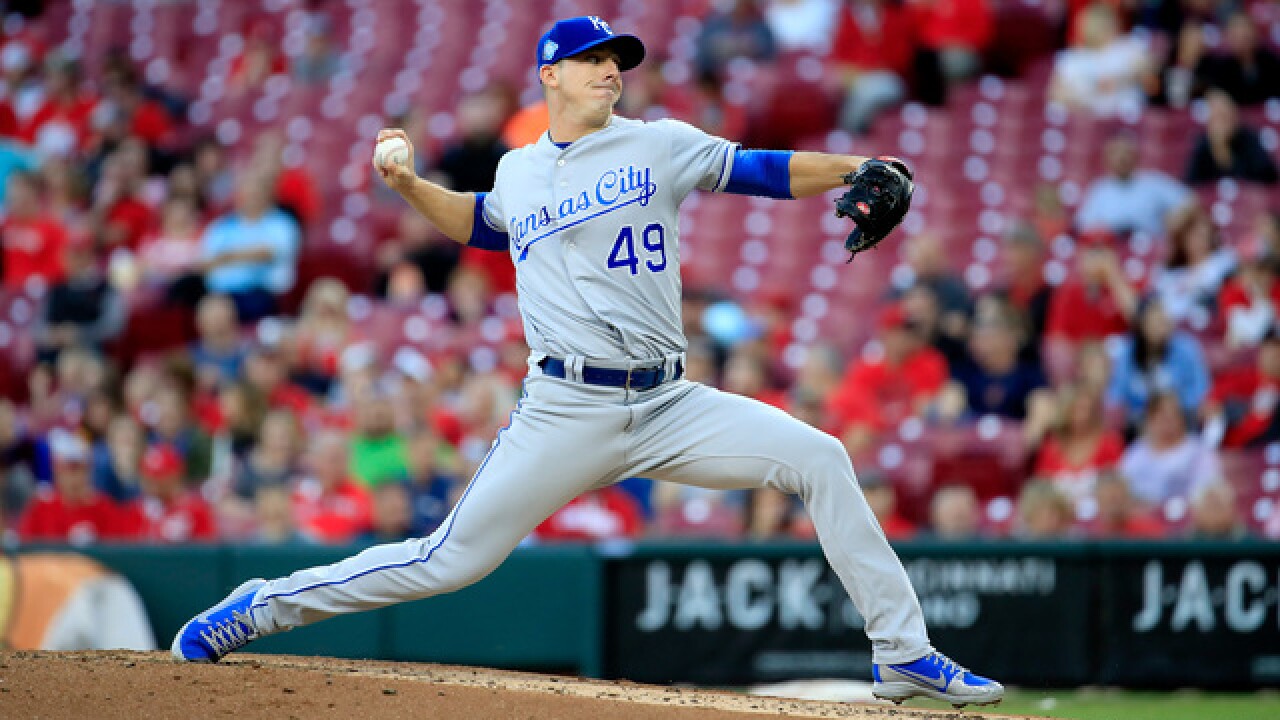 Talk about finishing with a flourish.

Rookie Heath Fillmyer struck out a career-high nine, collected his first major league hit and run batted in, and the Kansas City Royals wrapped up their road schedule with a 6-1 victory over the Cincinnati Reds on Wednesday night.

The only run Fillmyer allowed was Jose Peraza's 14th homer in the first inning. Fillmyer (4-2) retired 11 straight batters in one stretch against a Cincinnati team that has scored three or fewer runs in 13 of its last 14 games.

"My curveball was working well against lefties, and I had a real nice slider against righties," Fillmyer said. "I was able to keep them off-balance."

He allowed four hits and two walks while tying his career high with 7 1/3 innings.

"He threw the ball well," Royals manager Ned Yost said. "He spotted it well and changed speeds well. He did a nice job of executing the game plan. When he makes a mistake lately, they don't seem to hurt him. He was down in the zone and changed speeds."

Fillmyer also chipped in to the Kansas City offense with a sixth-inning RBI double.

"If I missed that one, I was never going to get a hit," he said. "It was right down the middle. It was nice to get the monkey off my back."

Adalberto Mondesi tripled, scored two runs and stole two bases to spark the Kansas City offense. Whit Merrifield, who went into the game tied for the American League lead in hits and leading in stolen bases, extended his season-high hitting streak to 16 games with a third-inning single. He also stole two bases.

Alex Gordon tacked on a solo home run to help Kansas City to a third straight win and fourth in its last five games.

The Royals finished with a 26-55 road record. They need one win in their last four games to avoid matching their single-season record of 106 losses, set in 2005.

The Reds have lost five straight games, all to teams with worse records, and six of their last seven. Cincinnati's offensive struggles date to the start of a 10-game road trip in Chicago on Sept. 14.

"We may have looked flat because we didn't get a lot of hits and there was no activity, but we have been doing all our preparations before the games and trying to finish strong," manager Jim Riggleman said. "Since Chicago, we haven't got good results. We didn't score a lot of runs in Chicago either, but we had better at-bats."

After lasting six innings in his previous start, a win at Miami, Reds starter Cody Reed (1-3) could manage just 3 2/3, giving up six hits and three runs with two walks and two strikeouts.

"I wasn't as sharp," Reed said. "I didn't have the back-foot slider to righties that I had the last two games. I rushed myself a little warming up before the game, but I felt fine."

40-40 MAN
Merrifield is the first player since Houston's Jose Altuve in 2014 with at least 40 doubles and 40 stolen bases in the same season. The only other Royal with that combination is Johnny Damon in 2000.

CHANGEUP
RHP Michael Lorenzen (3-2) now is scheduled to start Cincinnati's game on Saturday against the Pirates. Sunday could be a bullpen day with RHP Sal Romano (8-11) starting, Riggleman said.

UP NEXT
Royals: RHP Glenn Sparkman (0-3) makes his fourth start in the opener of a season-ending, four-game series against division champion Cleveland.
Reds: RHP Anthony DeSclafani (7-7), originally scheduled to start on Saturday, was moved up to start Friday against Pittsburgh in place of RHP Luis Castillo, who was shut down for the season.