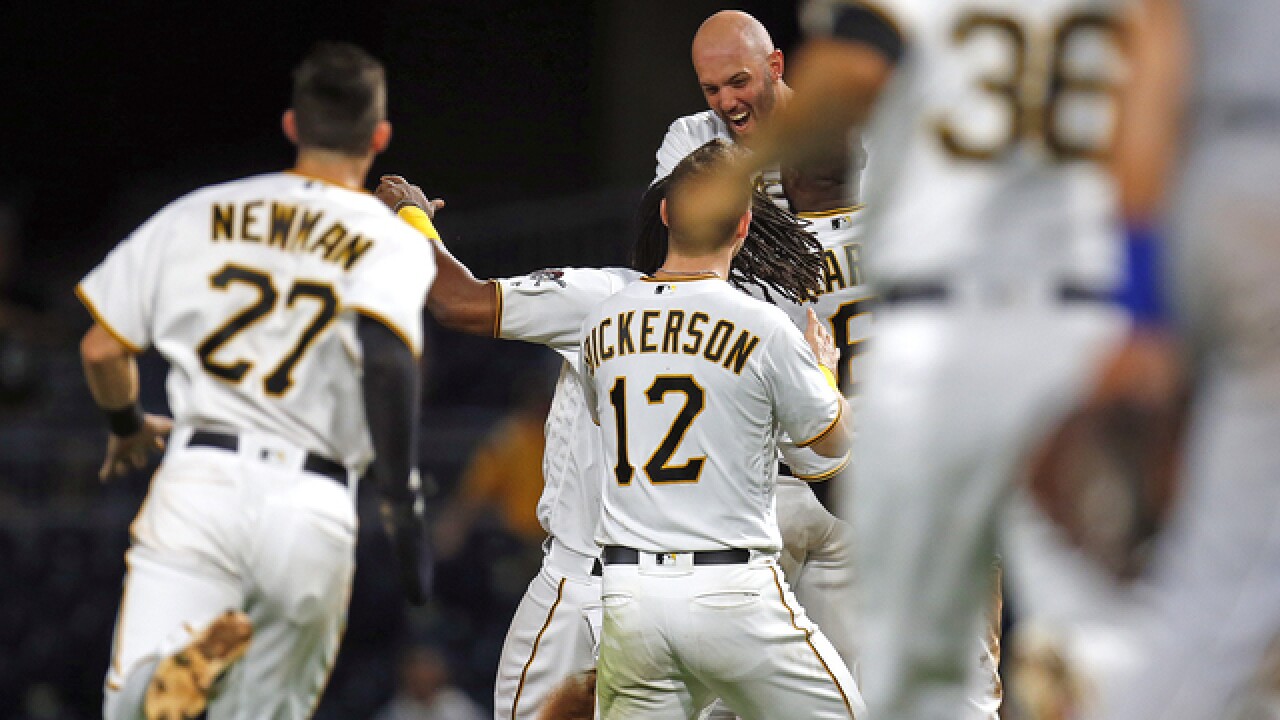 Copyright 2018 Scripps Media, Inc. All rights reserved. This material may not be published, broadcast, rewritten, or redistributed.
Justin K. Aller
<p>PITTSBURGH, PA - SEPTEMBER 17: Jacob Stallings #58 of the Pittsburgh Pirates celebrates after hitting a walk off RBI single in the ninth inning against the Kansas City Royals during inter-league play at PNC Park on September 17, 2018 in Pittsburgh, Pennsylvania. (Photo by Justin K. Aller/Getty Images)</p>

Rookie Jacob Stallings hit a two-out single in the bottom of the ninth inning to rally the Pittsburgh Pirates to a 7-6 victory over the Kansas City Royals on Monday night.

After Jordan Luplow grounded into a double play, Kevin Kramer walked and moved to second on Kevin Newman's single. Stallings then singled into left field off Ben Lively (0-3), scoring Kramer.

It was Stallings' second career game-ending hit. The catcher also had one in 2016.

The Pirates scored twice with two outs in the eighth inning to tie the game at 6-all. The first run scored when first baseman Ryan O'Hearn failed to handle a throw from third baseman Hunter Dozier on a grounder by Pablo Reyes. Starling Marte followed with an RBI triple.

Newman had three of Pittsburgh's 15 hits, and the rookie shortstop extended his hitting streak to six games as the Pirates won for the ninth time in 12 games.

O'Hearn's 11th home run in 36 games since making his debut July 31 led off the top of the eighth and gave the Royals a two-run lead.

Bell drew Pittsburgh to 5-4 in the seventh with a run-scoring single.

Gordon doubled in the game's first run in top of the third inning, and Corey Dickerson countered with an RBI single in the bottom half. Frazier's two-run single in the fourth gave the Pirates a short-lived 3-1 lead.

Keller got his first major league hit when he singled off Musgrove to lead off the fifth inning. It came in Keller's second career at-bat after he struck out in the second.

O'Hearn's homer to right field off Steven Brault was the first allowed by the left-hander in 117 career plate appearances against left-handed batters.

AND 31 YEARS LATER .
Royals 2B Whit Merrifield played his first game in Pittsburgh. Merrifield's father, Bill, was called up by the Pirates for one day late in the 1987 season then sent to instructional league to make the conversion from third baseman to first baseman.

Bill Merrifield did not appear in a game and never returned to the major leagues.

REMEMBERING MAC
A moment of silence was held for rapper/singer Mac Miller, who died last week. Miller was a Pittsburgh native and Pirates' fan.

UP NEXT
Royals: LHP Eric Skoglund (1-5, 6.19) makes his third appearance and second start Tuesday night. He had been sidelined from May 26-Sept. 6 with a sprained ligament in his left elbow.