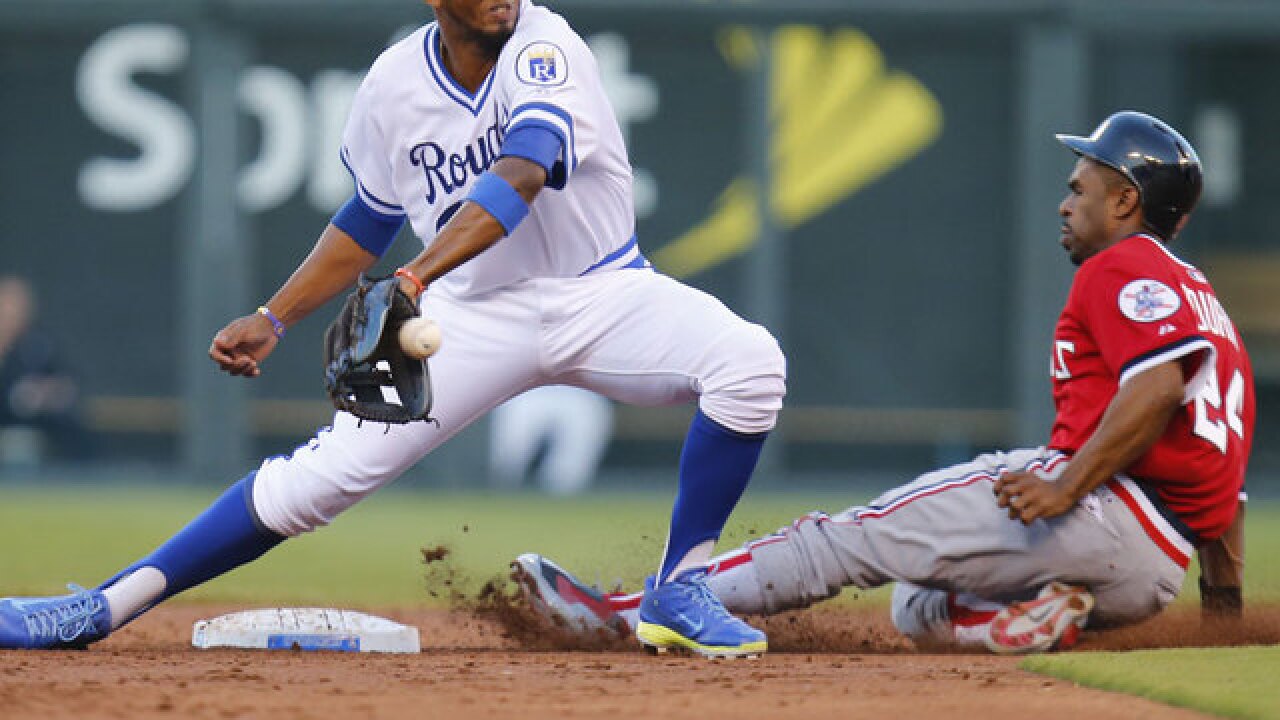 KANSAS CITY, Mo. (AP) — Alcides Escobar was not in the Kansas City Royals' lineup on Sunday for the first time since 2015 as the struggling club made a plethora of moves.

Escobar had started 421 consecutive games, the longest streak in the majors, before Royals manager Ned Yost benched him against the Boston Red Sox.

"I told him three weeks ago, 'look this is probably going to come to an end somewhere down the road,'" Yost said. "Today is the day I decided to do it. It's as simple as that. I've got other guys I need to play."

Escobar, 31, was the starting AL shortstop in the 2015 All-Star Game and won a Gold Glove that year when the Royals won the World Series. This year he is hitting .194 with 16 extra-base hits in 309 at-bats.

"I was proud about this streak, 421 straight games, that's not easy," Escobar said. "I feel so happy I made that. I understand the situation right now. The team is looking for something different. Ned told me yesterday you have an off-day (Sunday). I said I don't have any problems, do whatever you want."

Jakob Junis, who had lost his last seven starts, was scheduled to pitch Sunday, but instead went on the disabled list with back tightness. Heath Fillmyer made his first major league start, taking Junis' place.

The Royals purchased the contract of right-hander Glenn Sparkman from Triple-A Omaha. He was 7-3 with a 3.96 ERA in 16 starts between Double-A Northwest Arkansas and the Storm Chasers.

Yost also said veteran right-hander Jason Hammel is being removed from the rotation. Hammel, 2-11 on the season, had allowed 21 earned runs on 28 hits, including five homers, and six walks over 12 innings in losing his last three starts.

"He has an ERA of 6.16 and 32 more hits than innings pitched," Yost said. "He was starting to get super frustrated. It's time to take a step back and reset and give some of the younger guys (a chance). We want to look at some of these young guys in the starting rotation, too. Now is the time."

Burch Smith, a Rule 5 pick, will start Wednesday in Hammel's place against the Twins.

"I'm going to embrace it," Hammel said. "It's something I've done before. Obviously, not getting outs lately whatever the role is, so I've got to make some adjustments. ... Individually and personally, it's a little slice of humble pie, but sometimes it's necessary to reshape, reinvent to right the ship. I'll go out there and help out. I'm a team guy."

Smith has a 5.40 ERA in 24 relief appearances, but has not allowed a run in his last five appearances, covering 10 innings.

The Royals have the second-worst record in the majors, entering Sunday with a 25-63 record.

He said he will be looking more at the progress of the younger players the rest of the season.

"How are we coming with these kids that we may want to move forward with as we rebuild this thing," Yost said. "Who is going to be the pieces of it when we're going to be in a spot where we can compete again. That's the focus and what we're looking at.

"We're trying to win every game, but not at the expense of taking away experience. They're not very productive, but they're playing hard, with energy and with enthusiasm. And that's all you can ask right now. You hope somewhere down the road we can get over the hump with some production and win some games."