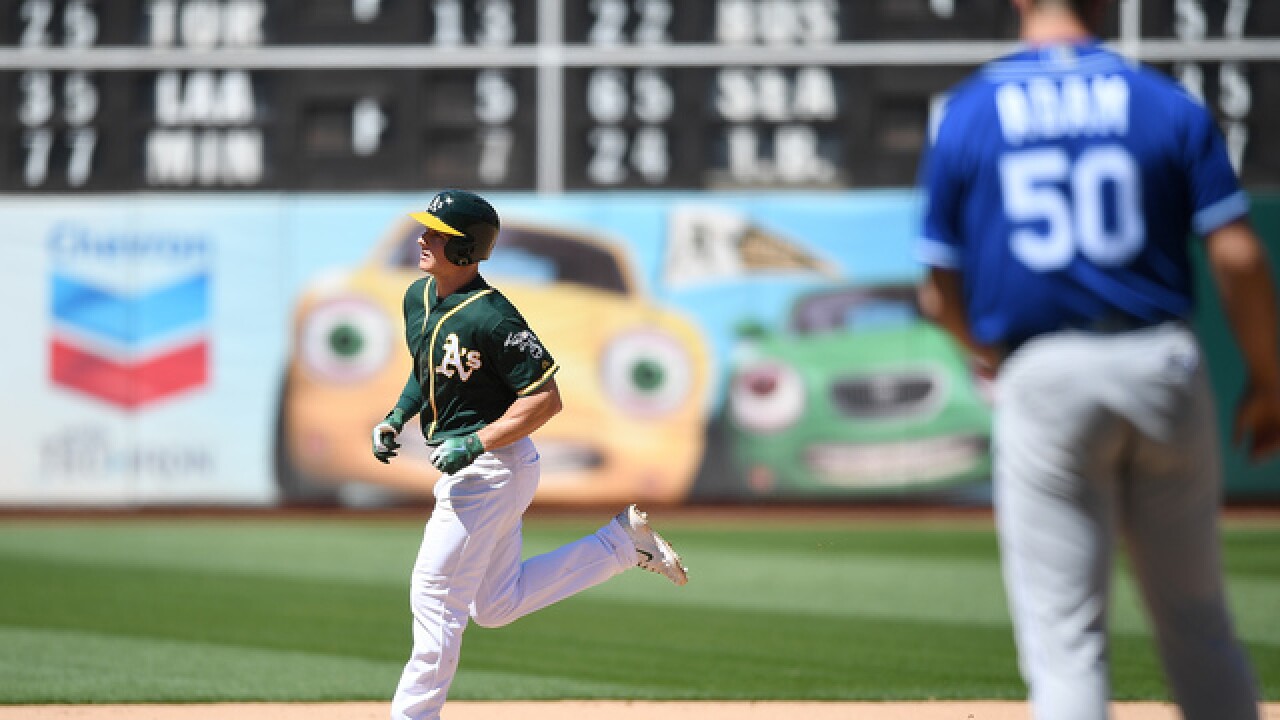 Copyright 2018 Scripps Media, Inc. All rights reserved. This material may not be published, broadcast, rewritten, or redistributed.
Thearon W. Henderson
<p>OAKLAND, CA - JUNE 10: Matt Chapman #26 of the Oakland Athletics trots around the bases after hitting a solo home run off of Jason Adam #50 of the Kansas City Royals in the bottom of the eighth inning at the Oakland Alameda Coliseum on June 10, 2018 in Oakland, California. (Photo by Thearon W. Henderson/Getty Images)</p>

Stephen Piscotty and Jonathan Lucroy both drove in runs for the A's, who squandered numerous scoring chances before Chapman came through with a solo home run off Royals reliever Jason Adam (0-1).

Blake Treinen (3-1) retired five batters to win following a strong start by left-hander Sean Manaea. Winless since May 14, Manaea allowed six hits and two runs over 7 1/3 innings and had six strikeouts with no walks.

Manaea's outing would have been worse had it not been for Semien.

Whit Merrifield doubled off Manaea in the eighth and advanced to third on Mike Moustakas' groundout. Treinen replaced Manaea and got Salvador Perez to hit a grounder to shortstop. Semien made a diving stop then threw to home while still on his knees to nail a siding Merrifield at the plate.

Perez hit his 11th home run for the Royals, who have lost seven of eight.

Kansas City's offensive funk continued, although Moustakas gave his ballclub a jolt in the first inning when he laid down a bunt to beat Oakland's defensive shift. But Moustakas was stranded at second, one of four runners the Royals left in scoring position.

Alex Gordon doubled off Treinen with one out in the ninth and moved to third on a groundout before Drew Butera fouled out to Lucroy to end the game.

The A's also squandered multiple scoring chances. They left the bases loaded twice then stranded a runner at third in the seventh after Dustin Fowler reached on a leadoff single and advanced on Kansas City pitcher Scott Barlow's two-base throwing error on a pickoff attempt.

Royals: Right fielder Jorge Soler was held out of the starting lineup for a second straight day after fouling a pitch off his foot Friday, although manager Ned Yost noted Soler is feeling better.

Athletics: Opening day starter Kendall Graveman continues to rehab in Arizona but manager Bob Melvin doesn't expect the right-hander back any time soon. ... 2B Jed Lowrie was given the day off. Chad Pinder started in place of Lowrie. ... Jake Smolinski was called up from Triple-A Nashville before the game. RHP Chris Bassitt was optioned to Triple-A Nashville.

Athletics: RHP Daniel Mengden (5-4, 2.85) faces the Astros on Tuesday. Two of Mengden's four losses this season have come against Houston.