Royals fall in the Big Apple, but so does Aaron Judge 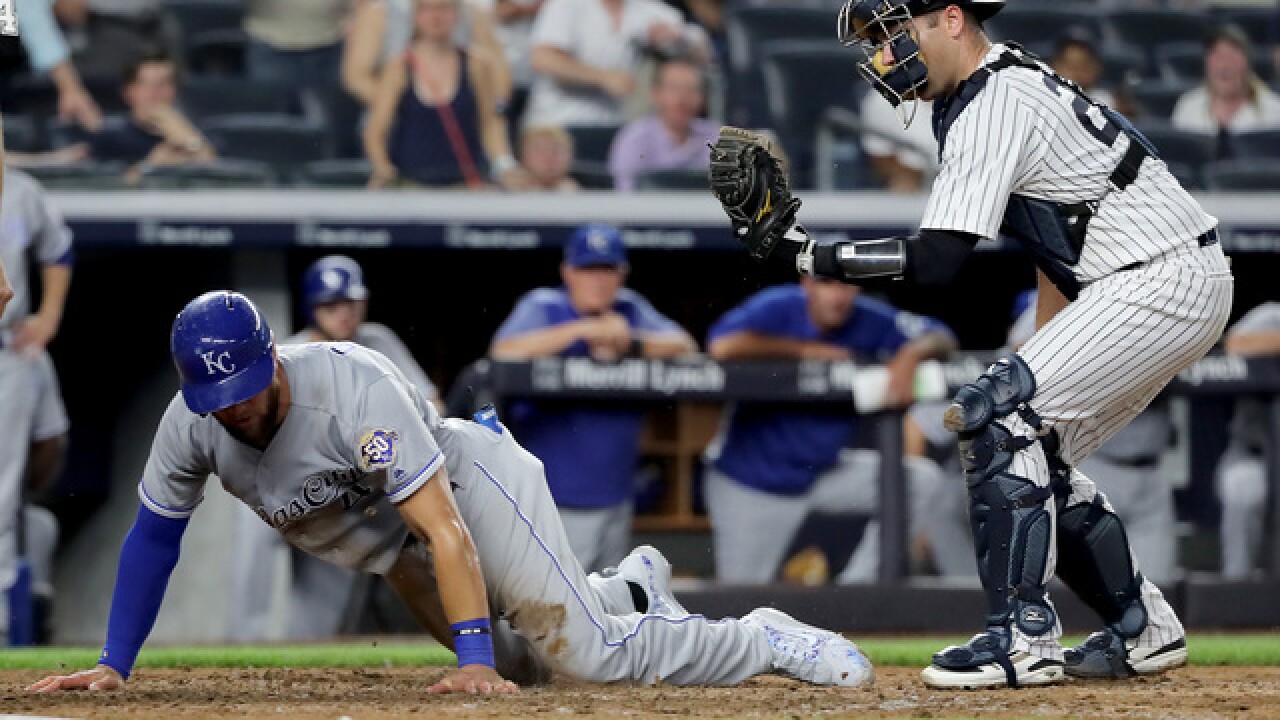 Copyright 2018 Scripps Media, Inc. All rights reserved. This material may not be published, broadcast, rewritten, or redistributed.
Elsa
<p>NEW YORK, NY - JULY 26: Alex Gordon #4 of the Kansas City Royals is tagged out by Austin Romine #28 of the New York Yankees to end the game at Yankee Stadium on July 26, 2018 in the Bronx borough of New York City.The New York Yankees defeated the Kansas City Royals 7-2. (Photo by Elsa/Getty Images)</p>

Yankees slugger Aaron Judge was hit on his right wrist by a pitch and forced to leave early Thursday night, overshadowing New York's 7-2 romp past the Kansas City Royals.

The Yankees said Judge was seen by a team doctor at the stadium and taken to a hospital for an MRI. There was no immediate report on the injury.

Normally an All-Star outfielder, Judge was the designated hitter. He winced when he was stung by a fastball from Jakob Junis in the first inning, got an infield hit the next time up and then was pulled for a pinch-hitter in the fourth.

On a busy day for the Yankees, Sonny Gray (8-7) pitched five shutout innings to win three straight starts for the first time since last July. He exited soon after getting nicked in the pitching hand by a hard grounder.

Didi Gregorius hit a three-run homer for New York, which began the day 5 1/2 games behind AL East-leading Boston. Center fielder Aaron Hicks threw out Alex Gordon at the plate to end the game as Gordon tried to score from second on a single.

There was a strange sighting, too. As Neil Walker batted with two outs in the Yankees seventh, several thousand fans in the sellout crowd suddenly switched on their cell phone lights and shined them toward the field. There was no instant explanation.

Gregorius homered one pitch after shortstop Adalberto Mondesi bounced a throw to first on a routine grounder with two outs. As Gregorius rounded the bases, Mondesi took off his glove and wandered into shallow center field.

Salvador Perez hit a two-run homer in the Royals sixth off Adam Warren.

Yankees: Rookie RHP Domingo German, who made 13 starts for the Yankees before being sent to Triple-A last week, left a start for Scranton/Wilkes-Barre after one inning with what New York GM Brian Cashman said was biceps tendinitis.

Royals: Rookie RHP Brad Keller (3-4, 3.20 ERA) starts on his 23rd birthday. He pitched a perfect inning in relief against the Yankees in mid-May.

Yankees: LHP CC Sabathia (6-4, 3.51) will start on 12 days' rest. A rainout and the All-Star break resulted in the long break. He'll pitch on his bobblehead night in the Bronx.