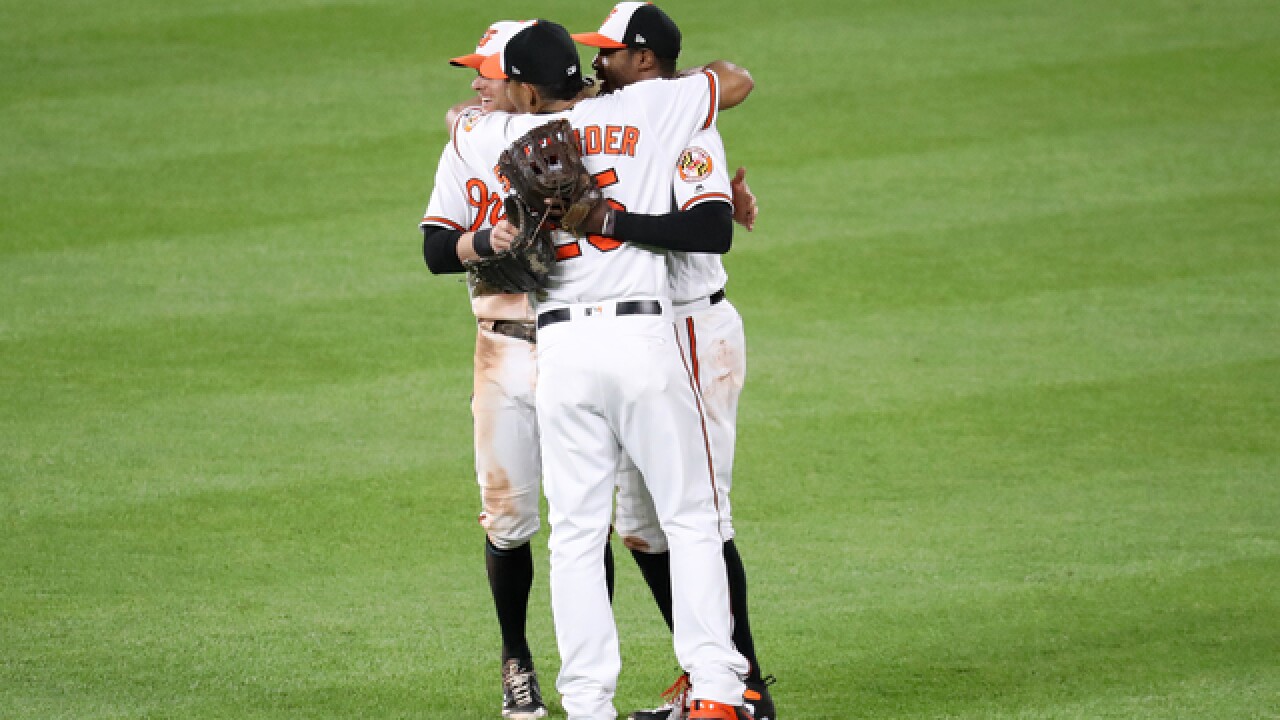 Copyright 2018 Scripps Media, Inc. All rights reserved. This material may not be published, broadcast, rewritten, or redistributed.
Rob Carr
<p>BALTIMORE, MD - MAY 9: Craig Gentry #14, Adam Jones #10, and Anthony Santander #25 of the Baltimore Orioles celebrate following the Orioles 5-3 win over the Kansas City Royals at Oriole Park at Camden Yards on May 9, 2018 in Baltimore, Maryland. (Photo by Rob Carr/Getty Images)</p>

Adam Jones homered, scored three runs and had three RBIs, and the Baltimore Orioles outslugged the Kansas City Royals 11-6 Thursday night to emerge with their second winning streak of the season.

Manny Machado and Trey Mancini also went deep for the Orioles, who trailed 4-0 in the first inning and 6-3 in the second before rallying to beat the Royals for the second night in a row. The only other time Baltimore (10-27) won successive games this season was April 5-6 at Yankee Stadium.

The Orioles had seven extra-base hits and eclipsed their previous season high of eight runs by the fourth inning.

Salvador Perez hit a grand slam for the Royals, who were seeking their second series win of the year.

Staked to a 4-0 lead before taking the mound, Ian Kennedy (1-4) left with the Royals down 9-6. He went four innings and allowed eight hits, including three home runs.

At least he lasted longer than Tillman, who yielded six runs and got only four outs.

Tillman has given up 13 runs over 2 1/3 innings in his last two starts, raising his ERA over seven starts to an unsightly 10.46.

After starting Tuesday night's game at Camden Yards with a 10-run first inning, the Royals settled for a four-run first in the finale. A single and two walks set the table for Perez, who ripped an 0-2 pitch from Tillman over the right-field scoreboard.

Machado connected with a man on in the bottom half to make it 4-3, but Tillman gave up a two-run single by Jorge Soler in the second, prompting his early exit.

Jones hit a two-run shot in the third to get Baltimore to 6-5, and the Orioles completed the comeback in the fourth.

Royals: CF Abraham Almonte did not play because he was still experiencing symptoms of the illness that caused him to be removed from Wednesday night's game. ... RHP Justin Grimm (back stiffness) threw a bullpen session and could start a rehab assignment next week, manager Ned Yost said.

Orioles: An MRI on RHP Darren O'Day's hyperextended elbow was "remarkably clean," manager Buck Showalter said.  There is no indication yet whether O'Day can come off the DL when eligible on May 16. ... INF Engelb Vielma fractured his kneecap when he tripped over the bullpen mound while chasing a foul ball in a minor league game. Vielma played in six games with Baltimore this season.

Orioles: Kevin Gausman (2-2, 3.30) helps Baltimore open a four-game series against the visiting Tampa Bay Rays on Friday night. The right-hander has lowered his ERA in each of his last six starts.