Junis gives up three home runs, 22 on the season 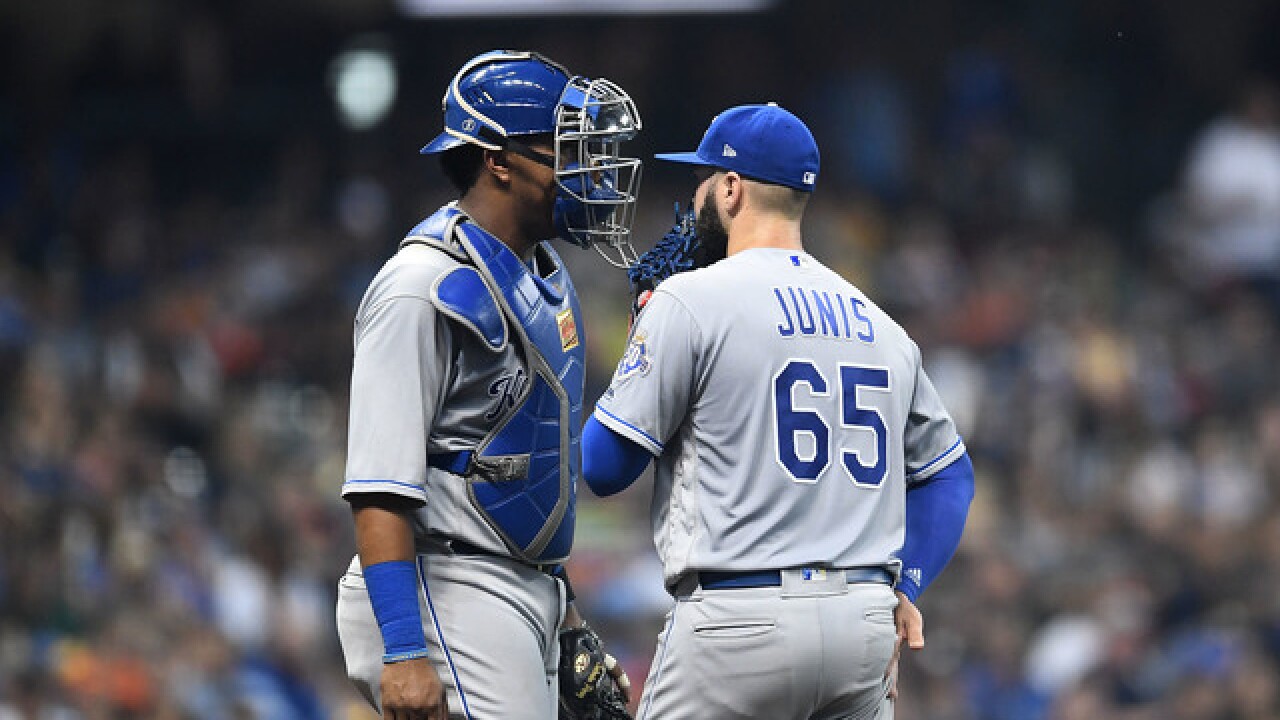 Copyright 2018 Scripps Media, Inc. All rights reserved. This material may not be published, broadcast, rewritten, or redistributed.
Stacy Revere
<p>MILWAUKEE, WI - JUNE 26: Jakob Junis #65 of the Kansas City Royals speaks with Salvador Perez #13 during the fifth inning of a game against the Milwaukee Brewers at Miller Park on June 26, 2018 in Milwaukee, Wisconsin. (Photo by Stacy Revere/Getty Images)</p>

Peralta (3-0) allowed a leadoff double in the third to Adalberto Mondesi and also allowed a walk in the second. The 22-year-old rookie was perfect otherwise, striking out 10 in his fourth major league start.

Mondesi, called up June 17, hit his first homer this season with two outs in the eighth off Dan Jennings. Jacob Barnes got two outs in the ninth and Josh Hader retired one batter for his seventh save.

Peralta has not allowed a run in 13 innings, giving up three hits in two starts since being recalled from Triple-A Colorado Springs on June 19.

Peralta was called up in May and allowed one hit in 5 2/3 scoreless innings in his debut, striking out 13 in a 7-3 win over Colorado. He gave up four runs in four innings without a decision in his second start, and then was sent down.

Junis, who has not won since May 18, surrendered five runs, seven hits and three walks in five innings.

Yelich staked the Brewers to a 2-0 lead in the first with his 11th home run, sending a 3-0 pitch over the wall in left after a one-out double by Braun. Aguilar made it 3-0 with his team-leading 17th homer, a two-out solo shot to center in the third.

The Brewers extended the lead to 5-0 in the fifth when Eric Thames singled and Braun followed with his ninth home run and first since June 8.

Kansas City threatened in the second when Mondesi opened with a double to right. Junis bunted, but Aguilar charged from first, made a barehanded pickup and got Mondesi at third.

Brewers: CF Lorenzo Cain was placed on the 10-day DL (left groin strain) and OF Keon Broxton was recalled from Triple-A Colorado Springs. ... LHP Boone Logan was released. ... 3B Travis Shaw, who left Sunday's game against St. Louis in the middle of his first at-bat, was not in the lineup and is day-to-day.

Brewers: LHP Brent Suter (8-4, 4.15) is 6-1 with a 3.12 ERA over his last seven starts. After no quality starts in his first 14, Suter has pitched seven innings in each of his last two, allowing one and two runs, respectively.