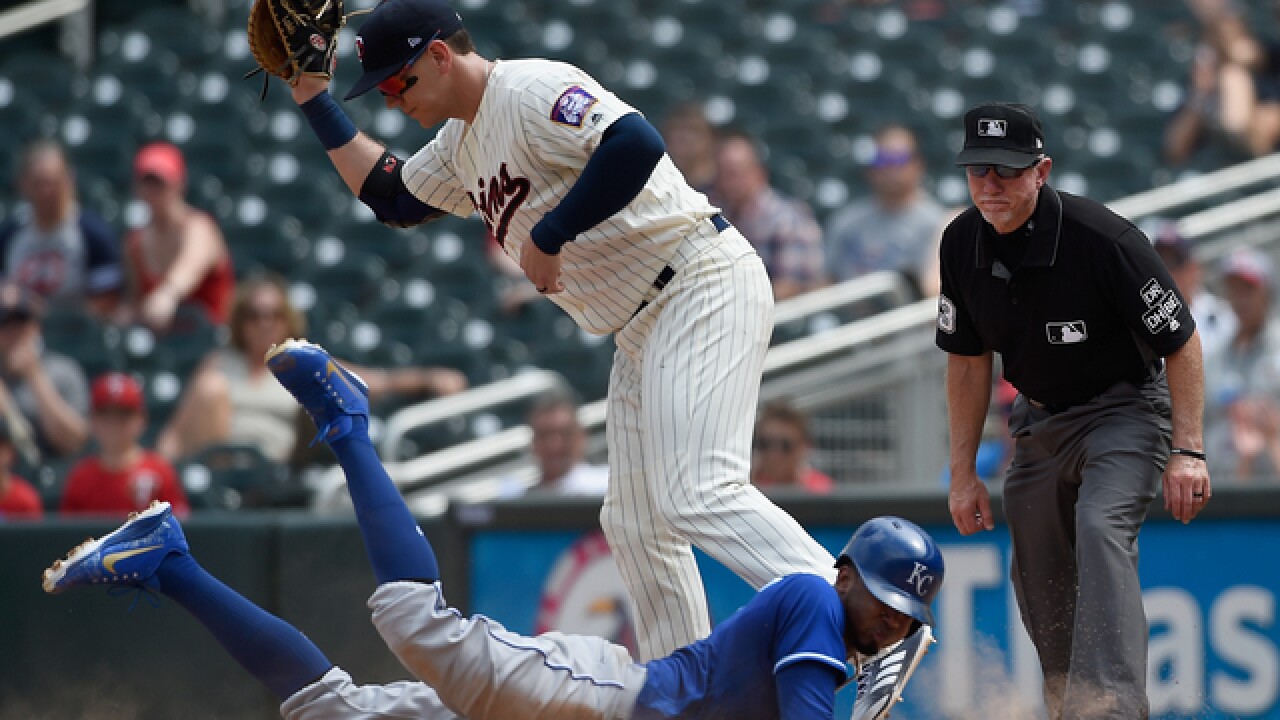 Copyright 2018 Scripps Media, Inc. All rights reserved. This material may not be published, broadcast, rewritten, or redistributed.
Hannah Foslien
<p>MINNEAPOLIS, MN - JULY 11: Alcides Escobar #2 of the Kansas City Royals is out at first base as Logan Morrison #99 of the Minnesota Twins fields the ball and umpire Lance Barksdale #23 looks on during the eighth inning of the game on July 11, 2018 at Target Field in Minneapolis, Minnesota. The Twins defeated the Royals 8-5. (Photo by Hannah Foslien/Getty Images)</p>

If this is Brian Dozier's last month with the Minnesota Twins, it's off to a strong start.

Whether he is helping boost the Twins back into the division race or merely increasing his trade value, Dozier has found his form at the plate.

Dozier hit a two-run homer, going deep for the second straight game to help the Twins beat the Kansas City Royals 8-5 on Wednesday.

"About stats, talk to me in October. If they're not there, then we'll talk," Dozier said. "I keep telling these guys, `Eight games: That's not that much."'

Lance Lynn (7-7) recovered from a three-run homer by Salvador Perez in the first inning to win his second straight start for the Twins, who used the bottom third of their lineup to launch rallies in the second and the fourth against Burch Smith (0-1).

Max Kepler, Jake Cave and Bobby Wilson went 6 for 11 with five runs scored. Wilson, whose batting average fell to .114 last week, had two RBIs and was one of three Twins with three hits, joining Dozier and Joe Mauer. Wilson, the backup catcher, is now hitting .169.

Dozier drove in a run with an infield single in the fourth. Then he sent his 15th homer of the season into the second deck above left field in the sixth inning against Enny Romero. Logan Morrison hit a solo shot one out later to pad the lead for Minnesota, which improved 6-1 on an 11-game homestand.

With the Twins trailing AL Central-leading Cleveland by 8 1/2 games when the day began, Dozier is among several prominent players on expiring contracts whose names are part of the annual July trade market speculation. Lynn is one of those, too.

"We don't pay attention to it, so whatever happens happens," said Lynn, who pitched to two batters in the sixth. "In this game I've learned that you go where you told, because they pay you. That's just the way it works, unless you've got a no-trade clause."

Only first baseman Joe Mauer has that.

"So everyone else can just wear it and do what they're told," Lynn said.

Mike Moustakas homered twice for the Royals, who took the Twins deep five times over the last two games of this series despite toting the fewest home runs in MLB. Kansas City has lost 23 of its past 27 games.

"Come in here and play hard," Perez said. "One of the things everybody should think: That's how we bring food to the table for our family. That's our job."

Dozier's production at the plate is lower than it has been in at least five years, but he has begun to warm up with a .375 batting average, three homers and eight RBIs over his past six games. Only four of his home runs have come at home this season. He hit 127 homers over the previous four years, with 63 of those at Target Field.

After 24 relief appearances this year, Smith made his first major league start since 2013, when he was with San Diego. Forearm and elbow injuries kept him from pitching in 2015 and 2016, and he spent last season with the Tampa Bay organization.

"It was definitely special. Today had been a long time," said Smith, who gave up seven hits in 3 1/3 innings. "It meant a lot just getting the opportunity to do it again. I was feeling a lot of emotions going into that game."

Royals: RHP Jason Adam was recalled from Triple-A Omaha to take the spot of a discouraged RHP Ian Kennedy, who returned to the disabled list with a strained left oblique after an injury-shortened three-inning start on Tuesday night. Adam had been sent down the day before so Kennedy, who has gone 16 turns without a victory, could be reinstated.

Twins: RHP Addison Reed was placed on the DL with tightness in his right triceps, and RHP Alan Busenitz was recalled from Triple-A Rochester for the third time this season. ... INF Ehire Adrianza is on track to come off the DL on Thursday, after missing 10 games with a strained left hamstring.

Royals: Following a day off, rookie RHP Brad Keller (2-3, 2.52 ERA) pitches in the opener of a three-game series at Chicago on Friday night for his eighth start of the season. Former Kansas City RHP James Shields (3-10, 4.53 ERA) takes the mound for the White Sox.

Twins: RHP Kyle Gibson (3-6, 3.59 ERA) starts a four-game series against Tampa Bay on Thursday night. LHP Blake Snell (12-4, 2.09 ERA) takes the mound for the Rays with the second-lowest ERA in league. Snell has won four straight starts with just two runs allowed in his past 28 2/3 innings.