Escobar's bunt leads to error, which leads to win 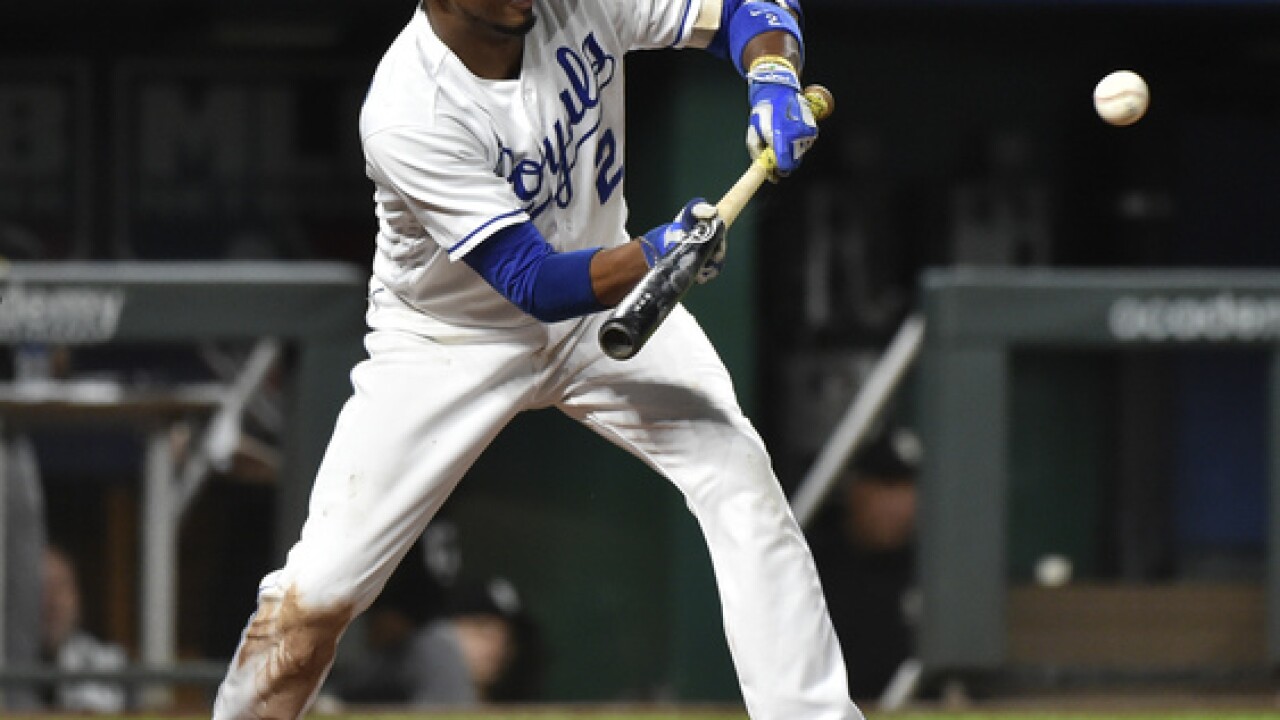 Copyright 2018 Scripps Media, Inc. All rights reserved. This material may not be published, broadcast, rewritten, or redistributed.
Ed Zurga
<p>KANSAS CITY, MO - SEPTEMBER 10: Alcides Escobar #2 of the Kansas City Royals lays down a sacrifice bunt in the 10th inning against the Chicago White Sox at Kauffman Stadium on September 10, 2018 in Kansas City, Missouri. Escobar's bunt scored Brian Goodwin from third to give the Royals a 4-3 win. (Photo by Ed Zurga/Getty Images)</p>

Brian Goodwin led off the Royals 10th with a sharp double. Alcides Escobar then bunted and Gomez (0-2) made a wild toss over third baseman Yolmer Sanchez, letting Goodwin score.

Whit Merrifield homered on the first pitch from White Sox starter Lucas Giolito. Ryan O'Hearn hit a solo homer in the sixth that made it 3-all -- he connected against Chicago in his big league debut on July 31, and now has 10 home runs in 30 games.

Adam Engel and Daniel Palka each homered in the Chicago third against Jakob Junis.

Jose Abreu, activated from the disabled list prior to the game, had three hits for the White Sox. He was put on the DL on Aug. 22 following surgery for testicular torsion.

Junis went eight innings, allowing seven hits. He faced the minimum after giving up Palka's homer, and has a 2.15 ERA in his last seven starts.

Merrifield hit his third leadoff homer this season and the Royals added another run in the second after a couple of unusual plays.

With a runner on second, Goodwin hit a slow dribbler up the third base line that appeared to be headed foul, but Sanchez touched the ball in fair territory and resulted in an infield hit. Alcides Escobar followed with a blooper to right field, and a run scored while Goodwin was thrown out at second.

TRAINER'S ROOM
White Sox: RHP Nate Jones is close to returning from the 60-day disabled list. He has been on the DL since June 24 with a muscle strain in his arm.

Royals: Manager Ned Yost said that RHP Ian Kennedy has only the "normal pitching soreness" following his first appearance since June 23. Kennedy went six innings Sunday in Minnesota. He gave up one run on four hits. ... OF Brett Phillips, out since Sept. 5 with a bruised shoulder, took 30 swings off the tee. He said he can swing without pain, but the follow-through causes him to tighten up. There is no timetable for his return.