Royals win third series of the season by out-slugging Twins, 11-8 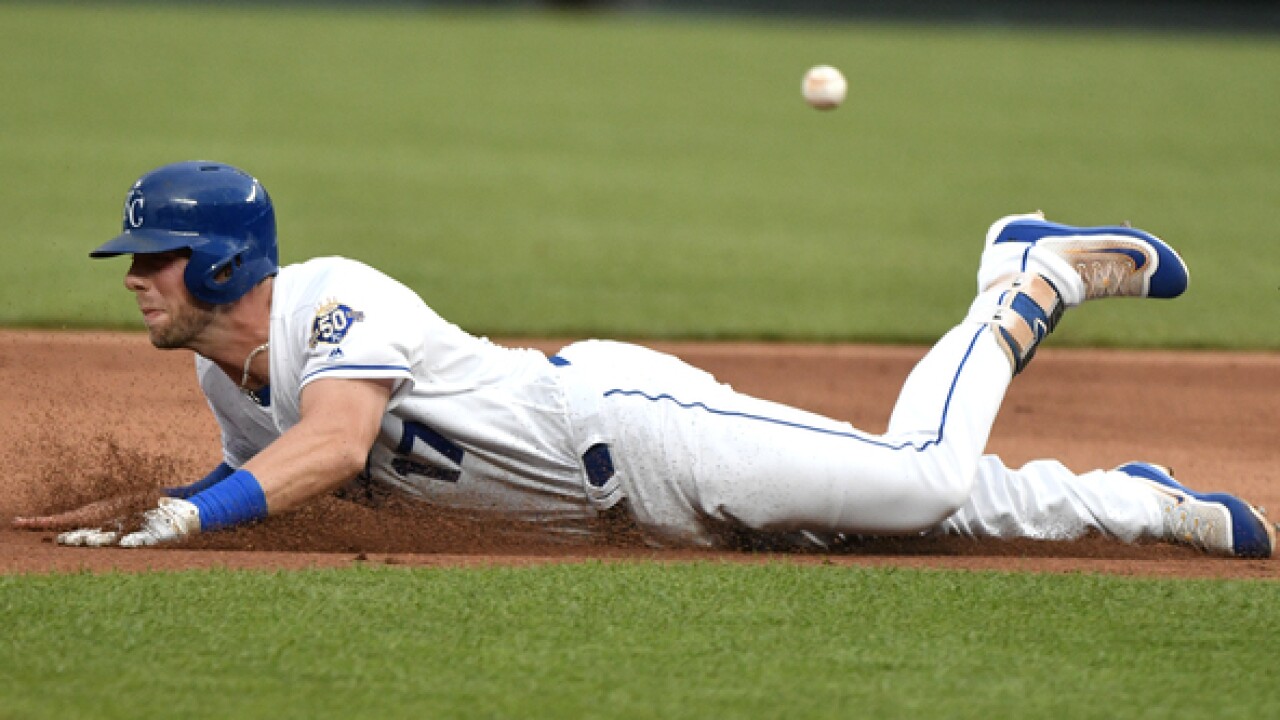 Copyright 2018 Scripps Media, Inc. All rights reserved. This material may not be published, broadcast, rewritten, or redistributed.
Ed Zurga
<p>KANSAS CITY, MO - MAY 29: Hunter Dozier #17 of the Kansas City Royals slides into second for a double in the second inning against the Minnesota Twins at Kauffman Stadium on May 29, 2018 in Kansas City, Missouri. (Photo by Ed Zurga/Getty Images)</p>

Mike Moustakas homered, doubled and drove in four runs in the first two innings, Jorge Soler went 4-for-5 with a home run, but the Kansas City Royals nearly blew a nine-run lead before holding on for a 11-8 victory over the Minnesota Twins on Wednesday night.

Moustakas' 12th homer was a towering two-run shot that just made it into the front row of the right-field seats and barely fair.

According to Statcast, it had a 46-degree launch angle, the highest in the majors this season, and carried 339 feet.

The Royals sent 11 men to the plate in a seven-run second. Soler nearly had a two-run homer in the inning, but after a review it was changed to a run-producing double. The second inning also included Ryan Goins' two-run triple.

Every Royals starter had scored in the first two innings for a 9-0 lead, but it almost was not enough.

The Twins chipped away at the Royals' lead, including bases-empty home runs by Brian Dozier and Ehrie Adrianza in the fifth and sixth innings, respectively.

Miguel Sano hit a two-run double in a four-run Twins' sixth and scored on Eduardo Escobar's two-out single, cutting the Royals' lead to 9-8.

Sano had a RBI single in the third and has hit in 17 consecutive games with 30 RBIs in that span.

Hunter Dozier led off the Kansas City seventh with his first career home run. Soler homered in the eighth for his fourth hit, matching his career high.

Kevin McCarthy (4-2), the fifth of seven Kansas City pitchers, retired all four batters he faced and earned the victory.

Kelvin Herrera protected the lead with a spotless ninth for his 12th save in 13 opportunities.

Twins rookie right-hander Fernando Romero (3-2) retired only five of the 15 batters he faced. Romero allowed eight runs and nine hits, a walk and a sacrifice fly. His ERA jumped from 1.88 to 4.51.

Jay singled in the seventh to extend his hitting streak to 12 games. Jay finished May with a .368 average and leads the majors with 43 hits in the month.

Several Royals players began walking off the field in the fifth after turning a double play. The only problem was the inning was not over.

Twins: RHP Aaron Slegers was recalled from Triple-A Rochester. He came in after Romero's early exit and allowed two runs and six hits over 5 1/3 innings.

Royals: RHP Trevor Oaks was recalled from Triple-A Omaha. He gave up three runs and five hits and a walk over 1 2/3 innings in his second big league appearance.

Twins: CF Byron Buxton (fractured left toe) went back on the disabled list with the toe still impeding his game. ... RHP Ervin Santana (hand) was recalled from his minor league rehab assignment with swelling and having trouble gripping the ball. He will be re-examined.

"When he's right, he's a productive bullpen piece," Royals manager Ned Yost said. "From the beginning on, it's just been a struggle for him. He's been dealing with foot problems and with back problems and continuing to try to pitch through it. We got to the point, where the best thing is just get Blaine healthy because he can help us when he's healthy."

Twins: RHP Jake Odorizzi is the scheduled starter as the Twins open a four-game series with AL Central leader Cleveland at Target Field. RHP Shane Bieber will start for the Indians, making his big league debut.

Royals: They have Thursday off before beginning a three-game series Friday with Oakland. Kansas City RHP Ian Kennedy will start the series opener.