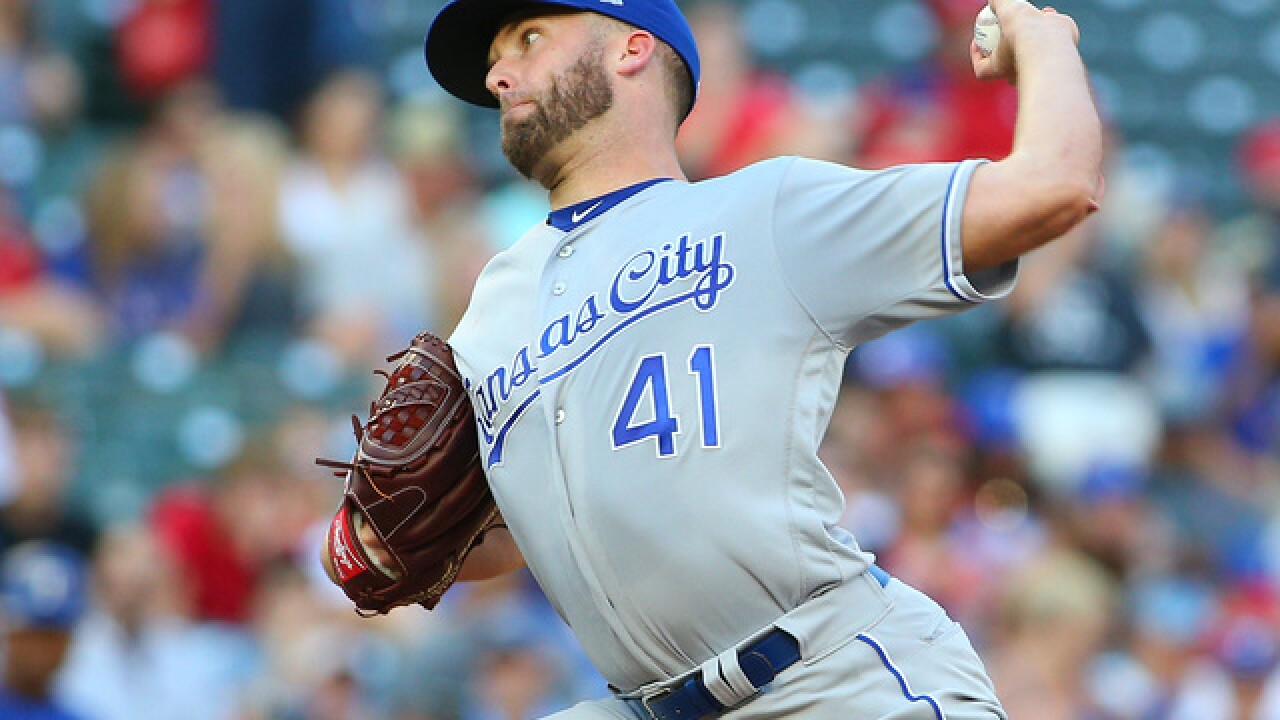 Copyright 2018 Scripps Media, Inc. All rights reserved. This material may not be published, broadcast, rewritten, or redistributed.
Rick Yeatts
<p>ARLINGTON, TX - MAY 24: Danny Duffy #41 of the Kansas City Royals throws in the first inning against the Texas Rangers at Globe Life Park in Arlington on May 24, 2018 in Arlington, Texas. (Photo by Rick Yeatts/Getty Images)</p>

Danny Duffy took a shutout into the eighth inning, Salvador Perez threw out a baserunner on a ball that hit Shin-Soo Choo in the face, and the Kansas City Royals beat the Texas Rangers 8-2 on Thursday night for their season-best third straight victory.

Perez had four RBIs on a pair of two-run singles with two outs, first in the fifth and then the seventh innings. But the catcher's caught stealing in the first inning was more memorable.

Duffy's pitch in the dirt bounced off Perez and then hit Choo in the face, sending the left-handed hitter staggering out of the box. Perez scrambled to get the ball from in front of home plate, then threw out Delino DeShields trying to take second on the play. Choo remained in the game and drew a walk in the plate appearance.

Duffy (2-6) allowed a run and four hits, struck out five and walked two in 7 2/3 innings in his longest outing of the season. The veteran left-hander entered the game with a 6.88 ERA this season and had allowed at least five earned runs in five of his previous 10 starts.

After DeShields led off Texas' first inning with a single to right field, Duffy didn't allow another hit until Choo singled in the seventh. Rougned Odor broke up the shutout bid with a two-out single in the eighth, ending Duffy's night.

Rangers right-hander Austin Bibens-Dirkx (0-1) gave up six runs, four earned, on eight hits in 6 1/3 innings. He made his season debut for Texas after his contract was purchased from Triple-A Round Rock earlier in the day.

Ramon Torres had two hits and three runs in his first appearance of the season. He was a late lineup replacement for Alex Gordon, who had a sore hip and a stiff neck.

The Royals scored two unearned runs in the second inning after having no one on with two outs. Torres, who was recalled from Triple-A Omaha last Saturday, followed Ryan Goins' single to center that rolled past DeShields' glove. Goins and Torres both scored on the three-base error.

To make room for Bibens-Dirkx on Texas' 40-man roster, left-hander Brandon Mann was optioned to Round Rock. Mann appeared in three games, making his major league debut on May 13, after pitching 15 years in the minors and Japan.

Rangers LHP Mike Minor (3-3), who spent last season as a Royals reliever, has also lost three straight. He gave up 14 earned runs in 15 1/3 innings in the three games.