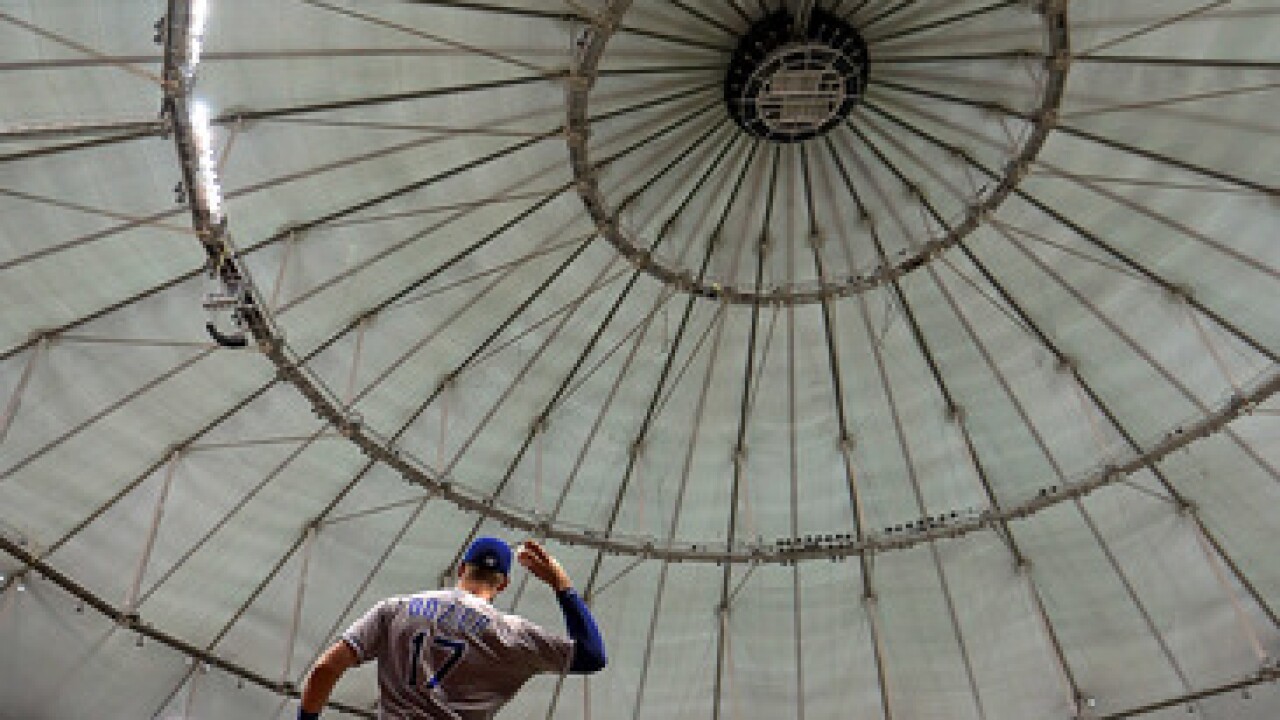 Copyright 2018 Scripps Media, Inc. All rights reserved. This material may not be published, broadcast, rewritten, or redistributed.
Mike Ehrmann
<p>ST PETERSBURG, FL - AUGUST 21: Hunter Dozier #17 of the Kansas City Royals warms up in the first inning during a game against the Tampa Bay Rays at Tropicana Field on August 21, 2018 in St Petersburg, Florida. (Photo by Mike Ehrmann/Getty Images)</p>

The scoreless stretch ended when Snell (15-5) allowed a fifth-inning solo homer to Ryan O'Hearn. Snell struck out 11 and gave up four hits in six innings. The left-hander has 13 straight home starts of allowing one earned run or fewer, which is longest stretch in the majors since 1913, according to the Elias Sports Bureau.

Since returning from a stint on the disabled list for left shoulder fatigue Aug. 4th, Snell is 3-0 and has given up two earned runs over 20 innings in four starts.

Tampa Bay's Tommy Pham had three hits, an RBI and a walk but left in the eighth after he appeared to hurt his right hand/wrist area diving back to first base on a pick-off attempt.

Willy Adames had three hits and put the Rays up 1-0 on a homer off an overhanging catwalk in the second that left fielder Alex Gordon nearly made a diving catch on. The effort would have been in vain if Gordon caught it because Tropicana Field ground rules state a ball hitting that catwalk is an automatic home run.

Gordon was OK after going over the short wall down the left-field line trying to catch Brandon Lowe's fifth-inning foul ball.

Joey Wendle made it 3-0 with a two-run triple off Glenn Sparkman (0-2) during the fourth.
Sparkman gave up three runs and seven hits over four innings in his second career start.
Sergio Romo pitched the ninth for his 17th save, working out of a two-on, one-out jam.

Rays: 3B Matt Duffy, hitting .202 over his previous 25 games, was rested. Duffy was limited to three minor league games in 2017 following Achilles tendon surgery. "We're getting to the dog days of the season, that's something I've got to recognize," manager Kevin Cash said. ... LHP Vidal Nuno (right hamstring) allowed three hits in three scoreless innings for Class A Charlotte.

UP NEXT
Royals RHP Jakob Junis (6-11) will face a Rays bullpen game Wednesday night. Junis is 2-0 with a 1.35 ERA in two appearances against Tampa Bay.