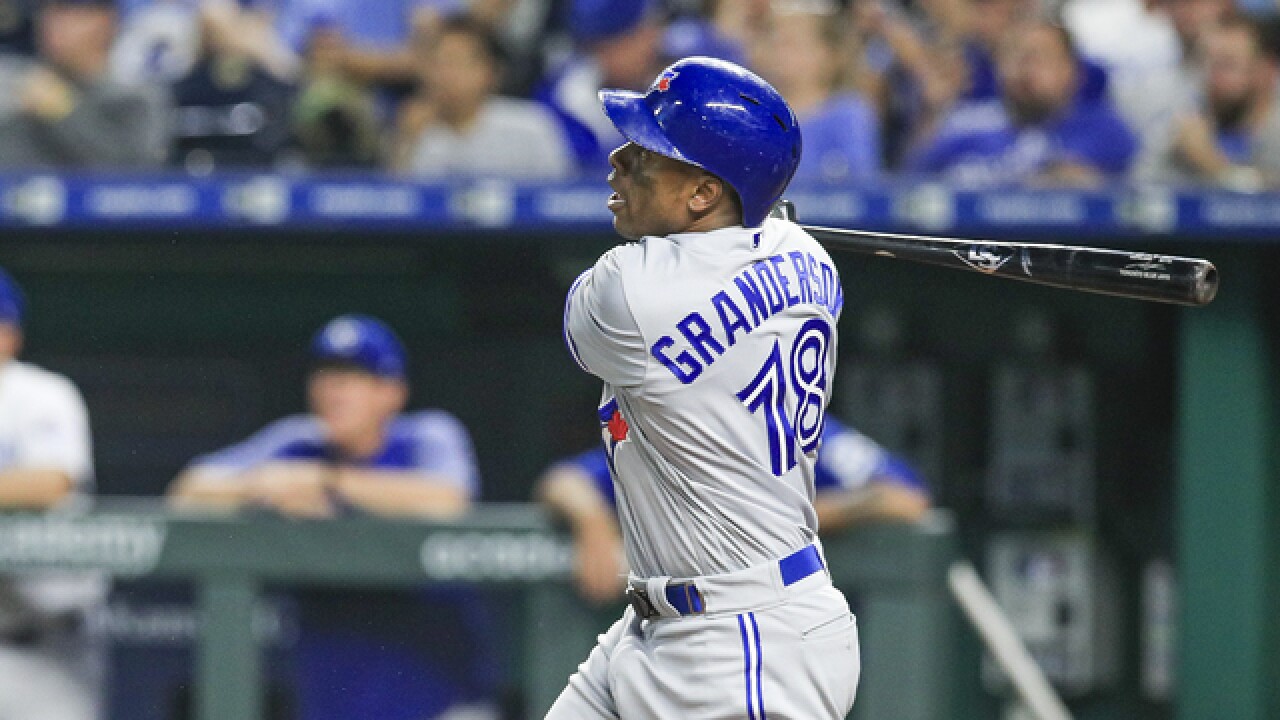 Jorge Lopez (0-2), who was making his Royals debut after being acquired July 27 from Milwaukee as part of the Mike Moustakas trade, threw a 2-0 fastball that Granderson drove over the Royals' right-field bullpen gate with two outs in the fourth inning.

It was Granderson's 10th career grand slam and his second this year, both against the Royals. The first was April 18 in Toronto. He has 19 home runs and 50 RBIs in 106 games against Kansas City.

Kevin Pillar singled home Teoscar Hernandez with the first run of the fourth and contributed an RBI single in the second for the Blue Jays, who have won three of four.

Estrada (6-9) gave up four runs on six hits over 6 2/3 innings to pick up his first career victory at Kauffman Stadium.

Perez connected in the first with Whit Merrifield aboard and led off the fourth with his 21st home run. Perez has hit at least 20 homers in four consecutive seasons, joining .John Mayberry, Steve Balboni, Bo Jackson and Mike Sweeney among the Royals to accomplish that feat.

Brett Phillips tripled in the seventh and scored on Alcides Escobar's two-out single for the other run off Estrada.

Ken Giles allowed a pinch-hit homer to Ryan O'Hearn but still earned his 15th save in as many chances and his third with the Blue Jays.

Rain delayed the start of the game by 15 minutes.

Adalberto Mondesi stole three bases, including one when he was picked off first base, on Tuesday. Royals manager Ned Yost compared Mondesi's acceleration to former Kansas City speedsters Jarrod Dyson and Terrance Gore. "It's up there," Yost said. "It's very easy, quick, hard speed. It's just, boom, he's gone. It's like the Road Runner. You expect a little pillow of dust following him. He's that fast."

Royals: RHP Blaine Boyer, who yielded a two-run eighth inning homer on Tuesday in a 6-5 loss to Toronto, was released. Boyer had a 12.05 ERA in 21 relief appearances. ... The Royals sent Gore to the Cubs for cash considerations. In parts of four seasons with Kansas City, Gore was primarily used as a pinch runner, stealing 21 of 25 bases and scoring 24 runs, but went 0-for-11 in 49 games.

Blue Jays: RHP Aaron Sanchez (bruised right index finger) made a rehab start for Class-A Dunedin in the Class A Florida State League, going 3 2/3 innings and allowing one run on two hits, while walking four and striking out three. He threw 35 strikes in 74 pitches.

Blue Jays: RHP Sam Gaviglio (2-5, 4.86 ERA), who was with the Royals last September and traded to Toronto in spring training, will start the series finale.