Bichette has big day for Jays in 4-1 win 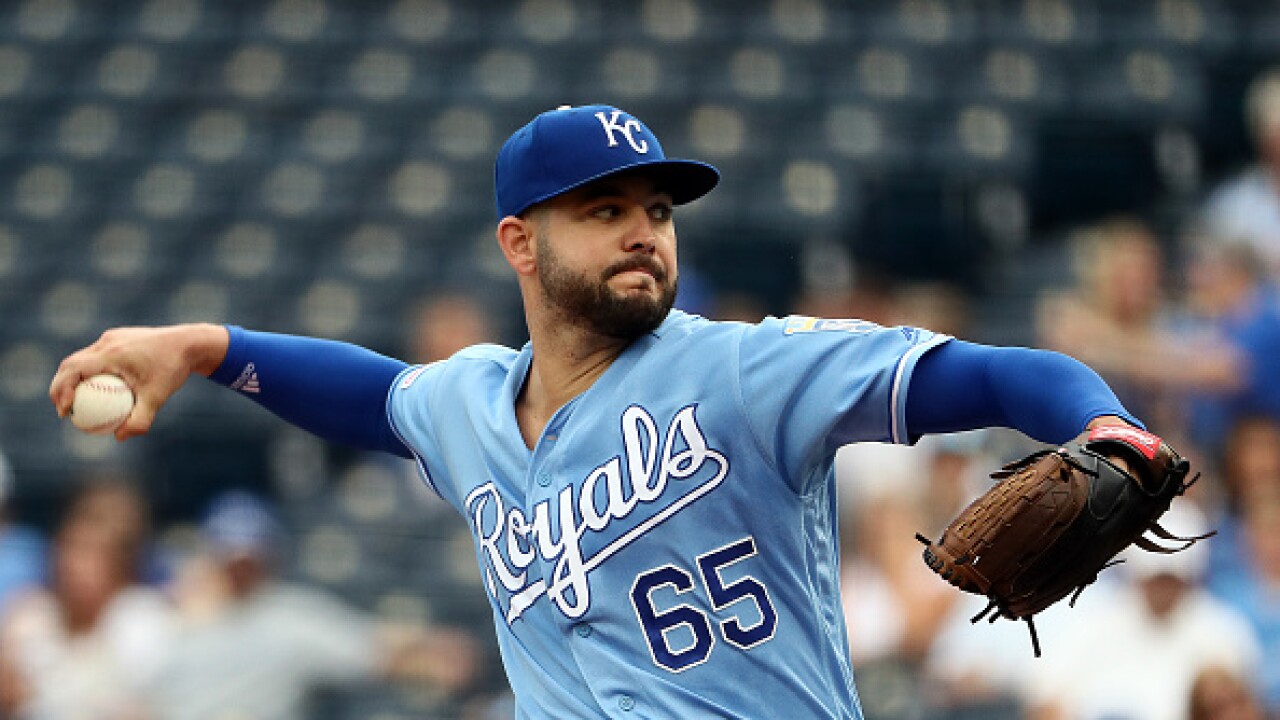 KANSAS CITY, Mo. (AP) — Bo Bichette's first career homer helped lead the Toronto Blue Jays to a three-game sweep of the Kansas City Royals.
Bichette's big moment came at the start of the eighth inning against Royals starter Jakob Junis, when his drive cleared the left-center field wall in the 4-1 win on Wednesday. Freddy Galvis also hit a crucial solo shot to center in the seventh that was his 16th homer of the season.
Bichette made his major league debut here Monday.
"After the first game was over, I was able to say, 'Okay, my career has started,' and then treat it like any other normal day," Bichette said. "He got me out on two sliders the first two at-bats and I made an adjustment and I hit it really hard."
Galvis' homer, which gave the Blue Jays a 2-1 lead, surprised Junis.
"He kind of dove out over the plate to get it and scooped it up and got it in the air," Junis said. "I thought Bubba (Starling) might have a chance on the warning track or something but it just kept carrying out."
Cavan Biggio followed Bichette's homer with a double, ending Junis' outing. Reliever Kevin McCarthy surrendered a run-scoring double to Teoscar Hernández.
Rookie Jacob Waguespack (2-1) went six innings for his second win in his fourth big-league start. He held the Royals to three hits and one run. Cam Gallagher barely cleared the left-field bullpen fence for his second homer, drilling a 2-2 pitch from Waguespack to open the third inning.
Junis (6-10) was cruising for much of the game, retiring the side on eight pitches each in the second, third and fourth innings. But the Jays got even 1-1 in the sixth as Biggio walked, stole second and scored on Justin Smoak's single.
"The first pitch (of the game) was probably the worst pitch in the seven innings that Junis threw - to Bichette was a fastball kind of high and over the middle of the plate and he hit the double down the line. But after that he was really good," Royals manager Ned Yost said.
Waguespack got exceptional defensive help early. Deep outfield catches by Lourdes Gurriel Jr. in left and Randal Grichuk in center prevented extra-base hits by Jorge Soler in the first inning and Hunter Dozier in the third. Smoak speared Ryan O'Hearn's hot shot to start a double play in the fourth and Gurriel charged in for a shoetop grab of Nicky Lopez's weak liner to end the inning.
"I didn't throw as many strikes as I wanted to but luckily the balls that were hit were at guys," Waguespack said. "The defense did a heck of a job."
Right after his last catch, however, Gurriel left the game with a sore right knee.
"Gurriel was out there making plays and sacrificed his body for me a couple of times," Waguespack said.
Rookie right-hander Justin Shafer worked a perfect ninth for his first career save.
JAYS ROOKIES CAN LEAD
With the Blue Jays shedding veterans, they have the second youngest team in the majors and manager Charlie Montoyo is encouraging the kids, including Biggio and Bichette, to take leadership roles.
"What I've been telling Biggio and Bo when they got here: 'This is your clubhouse, here we go. You guys were leaders in the minor leagues, it's the same thing here. Just because you're a rookie, don't (avoid being) a leader in the big leagues. Go ahead and start now,'" Montoyo said. "And they have been doing that."
SOLER STREAK ENDS
Soler's binge of reaching base via a walk or hit ended at 26 straight games when he went 0-for-4 Wednesday. That long stretch was important to a guy known primarily for home runs.
"Right now I feel good and every at-bat I focus on hitting a good pitch," the Royals' slugger said.
In that streak, which had been the longest active in the majors, he had 19 walks and 28 hits (seven homers) with an on-base percentage of .432.
Soler thought he had a hit on his vicious drive in the first inning before Gurriel snagged it. "I hit the ball hard but the outfielder made a great play. It was close," he said.
BORUCKI GOES ON IL
Toronto placed LHP Ryan Borucki (0-1, 10.80 ERA) on the 10-day injured list on Wednesday with inflammation of the left elbow. His roster spot was filled by LHP Buddy Boshers, called up from Triple-A Buffalo (0-2, five saves, 2.78 ERA). Boshers has big league experience with the Angels and Twins.
UP NEXT
Blue Jays: Toronto travels to Baltimore where RHP Trent Thornton (3-7, 5.45 ERA) will come off the injured list to start Thursday night. The Orioles will start RHP Asher Wojciechowski (2-3, 3.60 ERA).
Royals: After an open date Thursday, Kansas City will open a 10-game trip at Minnesota on Friday night. RHP Glenn Sparkman (3-7, 5.25 ERA) will be opposed by Twins LHP Martin Perez (8-4, 4.38 ERA).