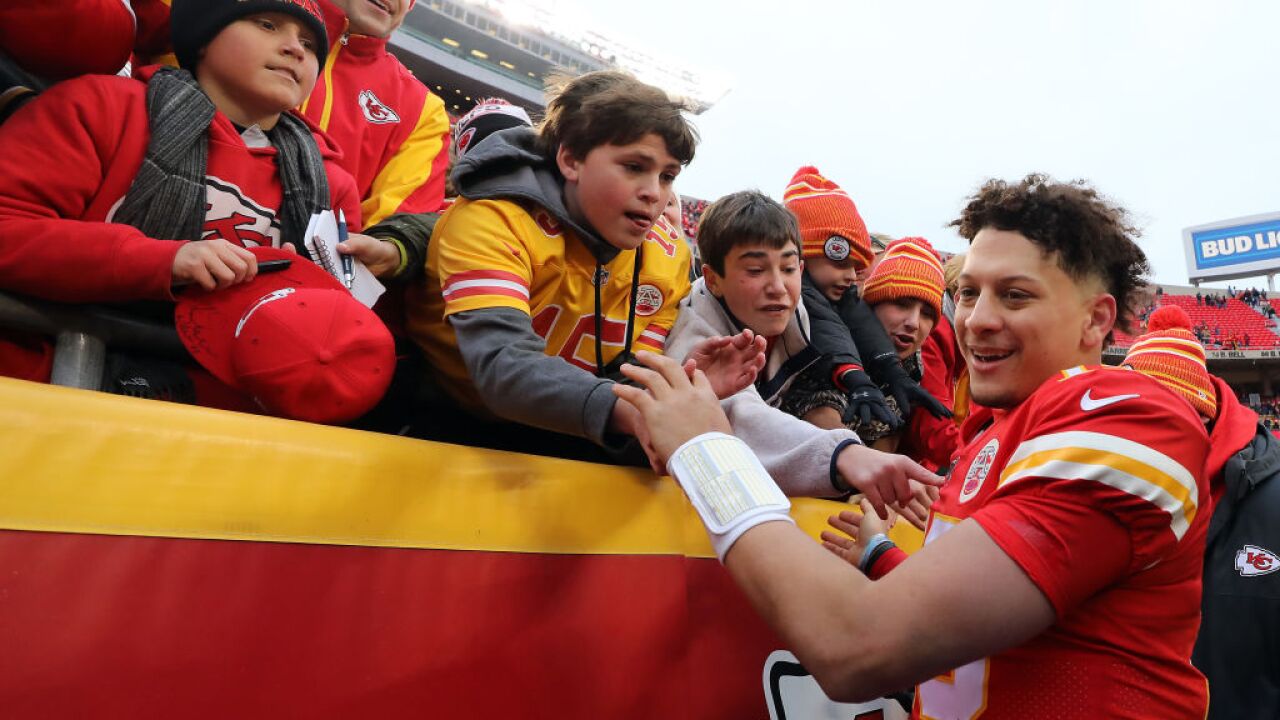 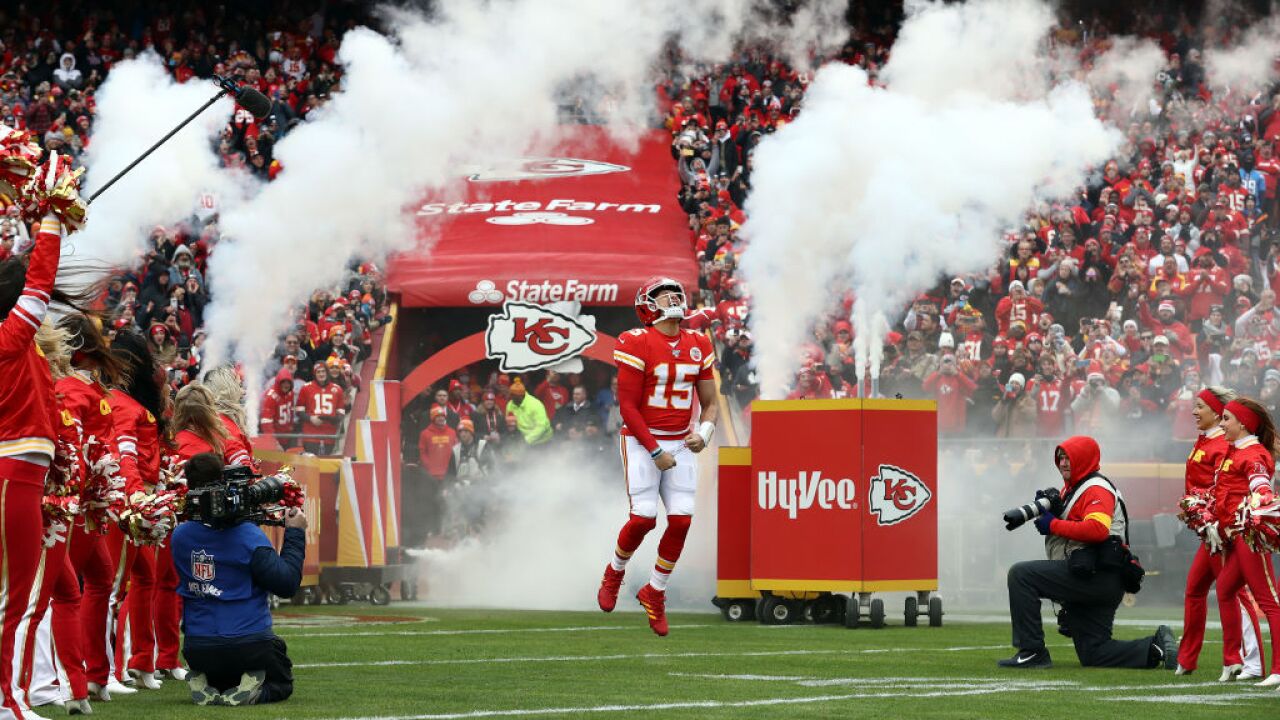 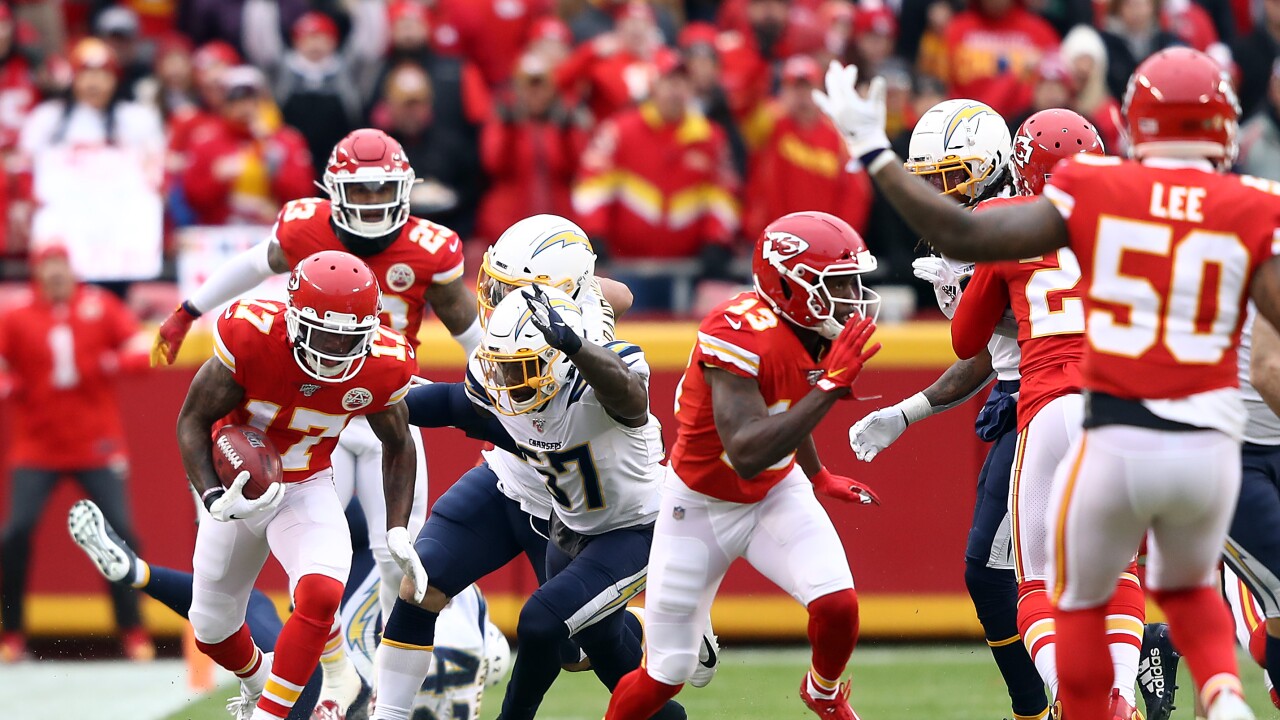 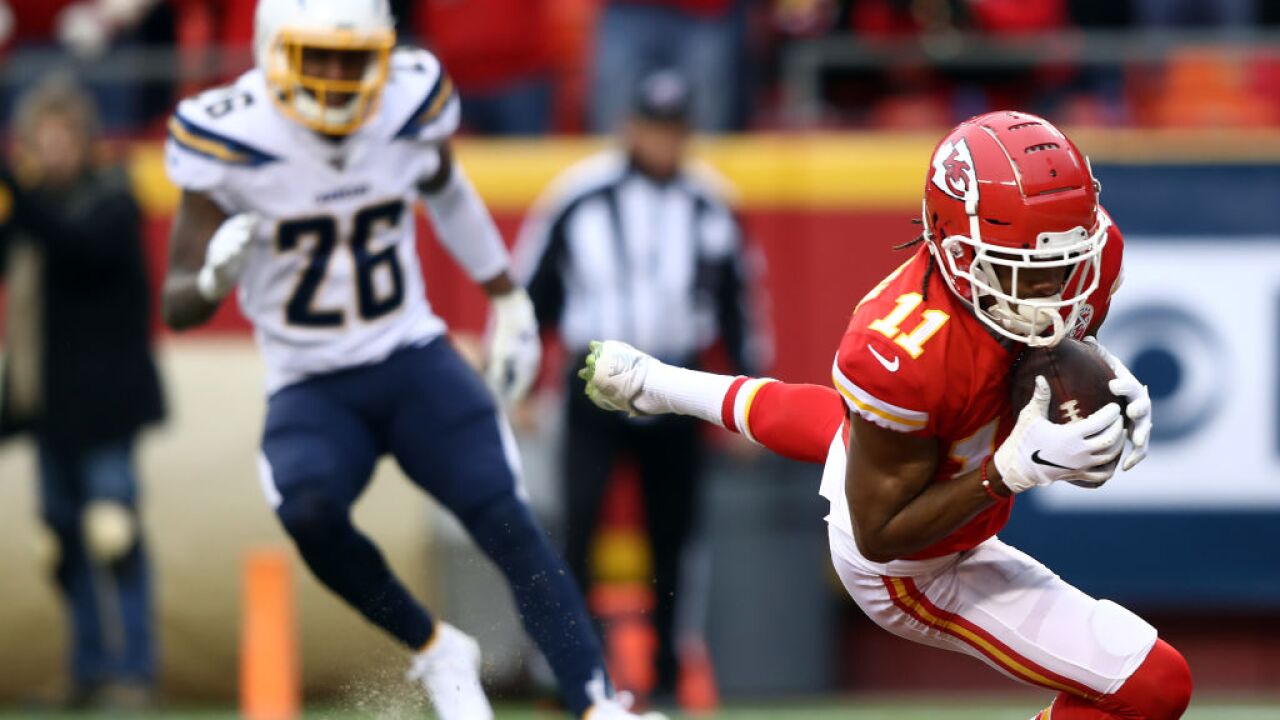 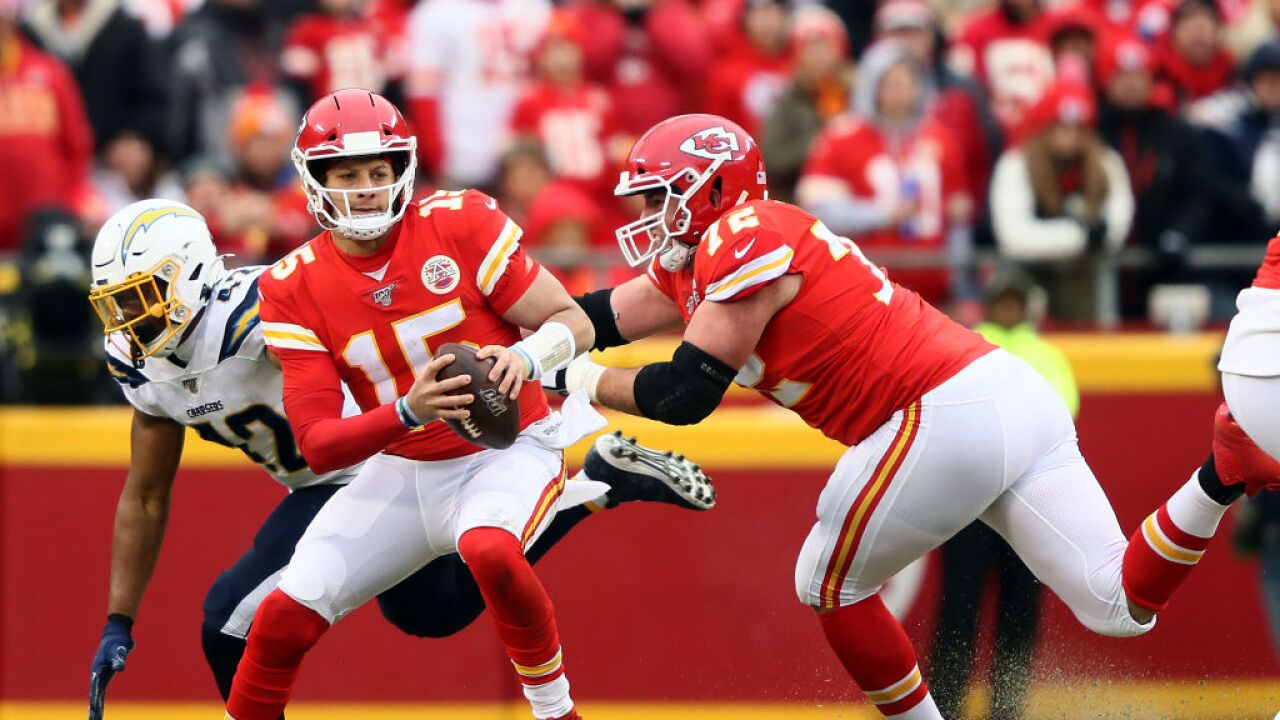 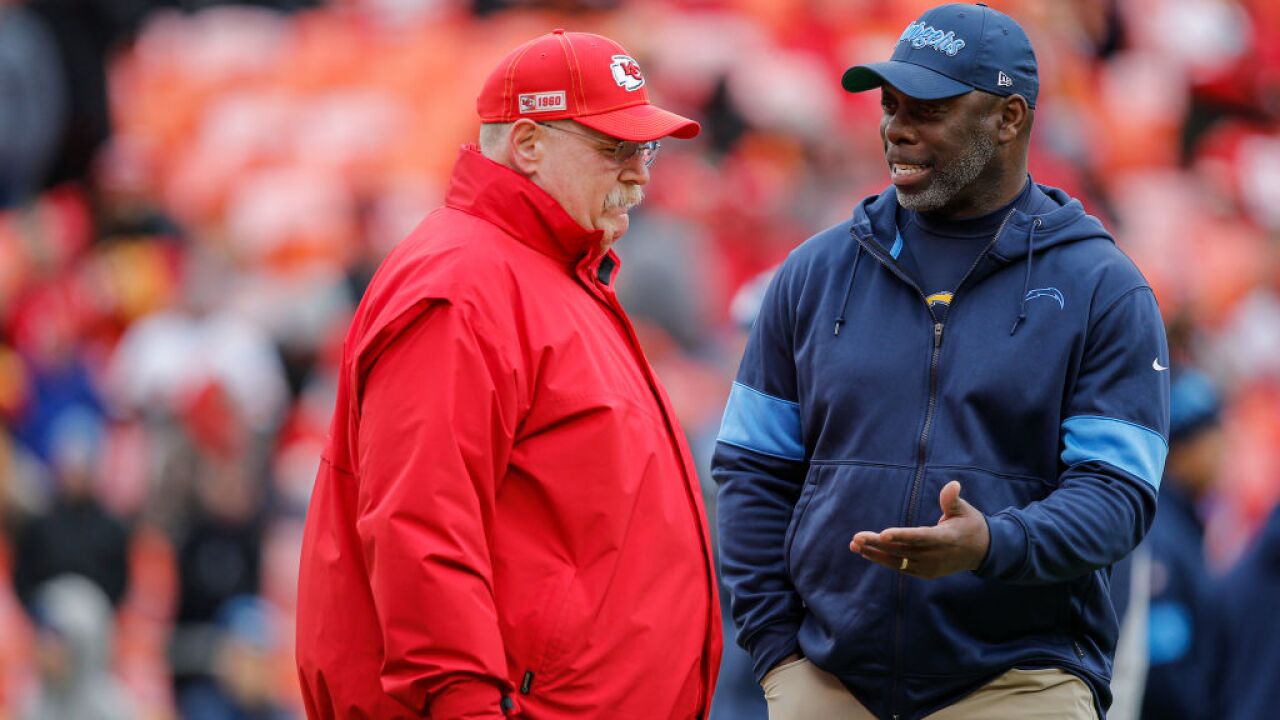 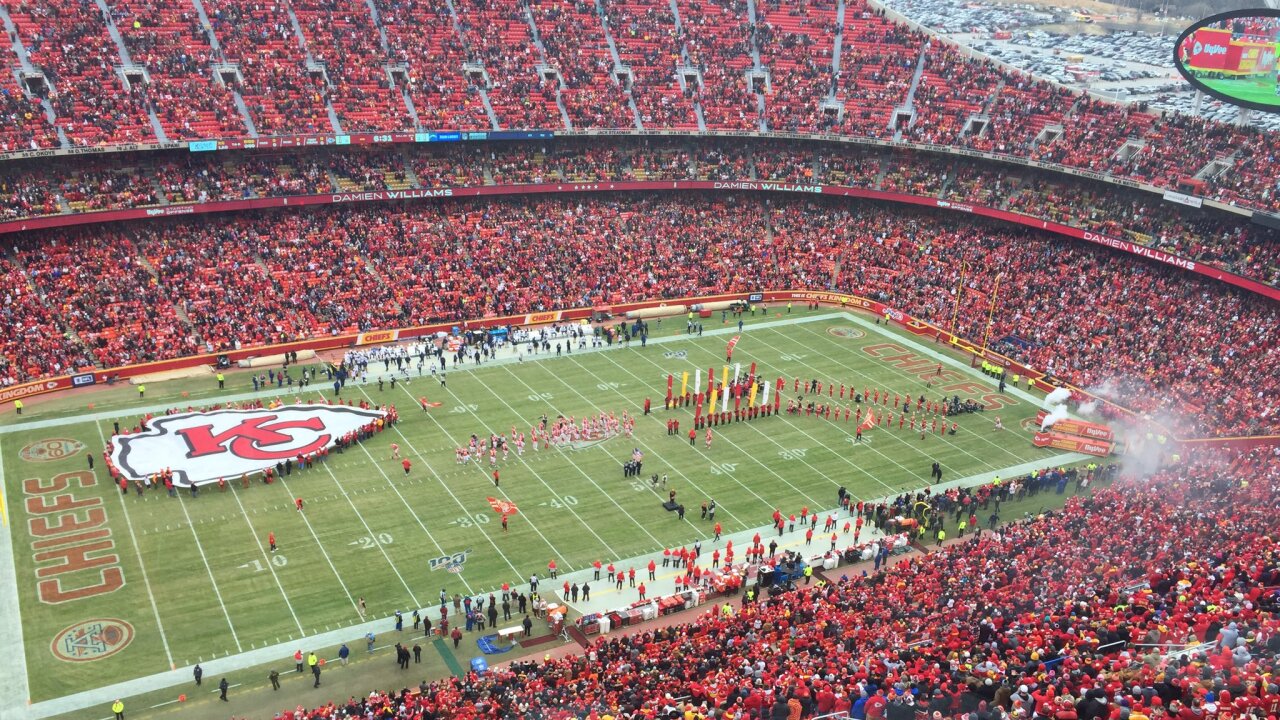 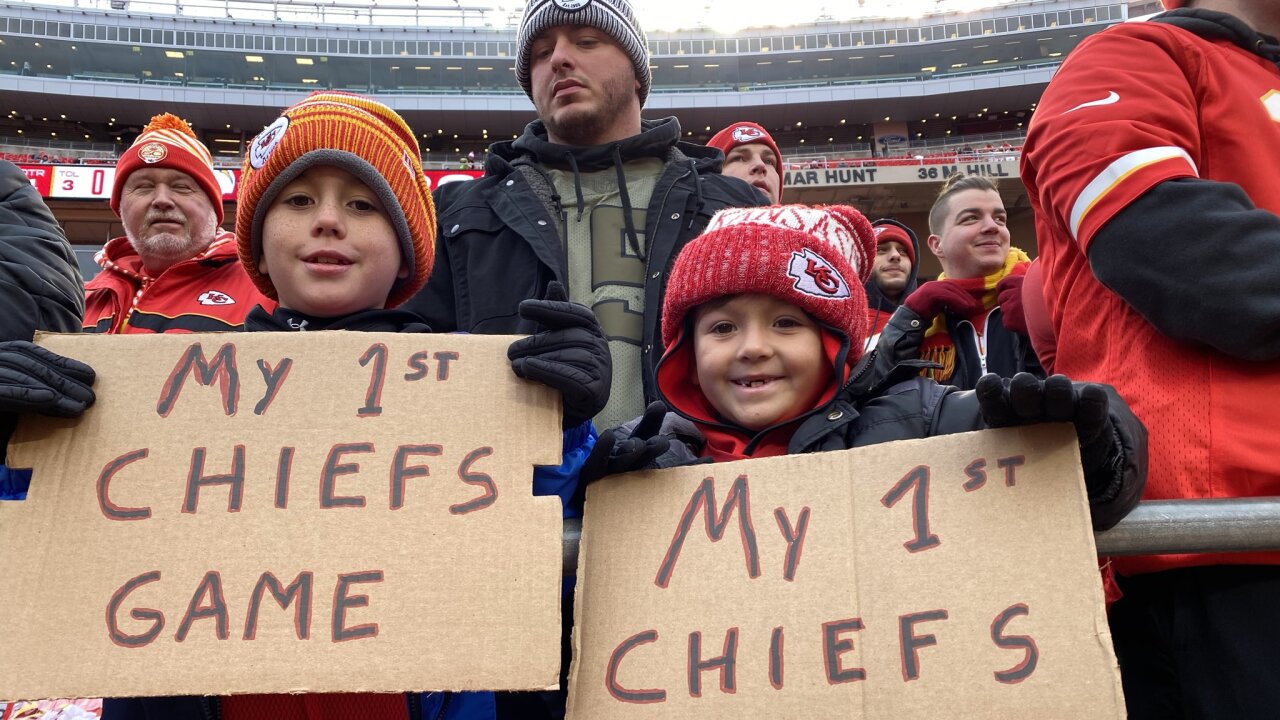 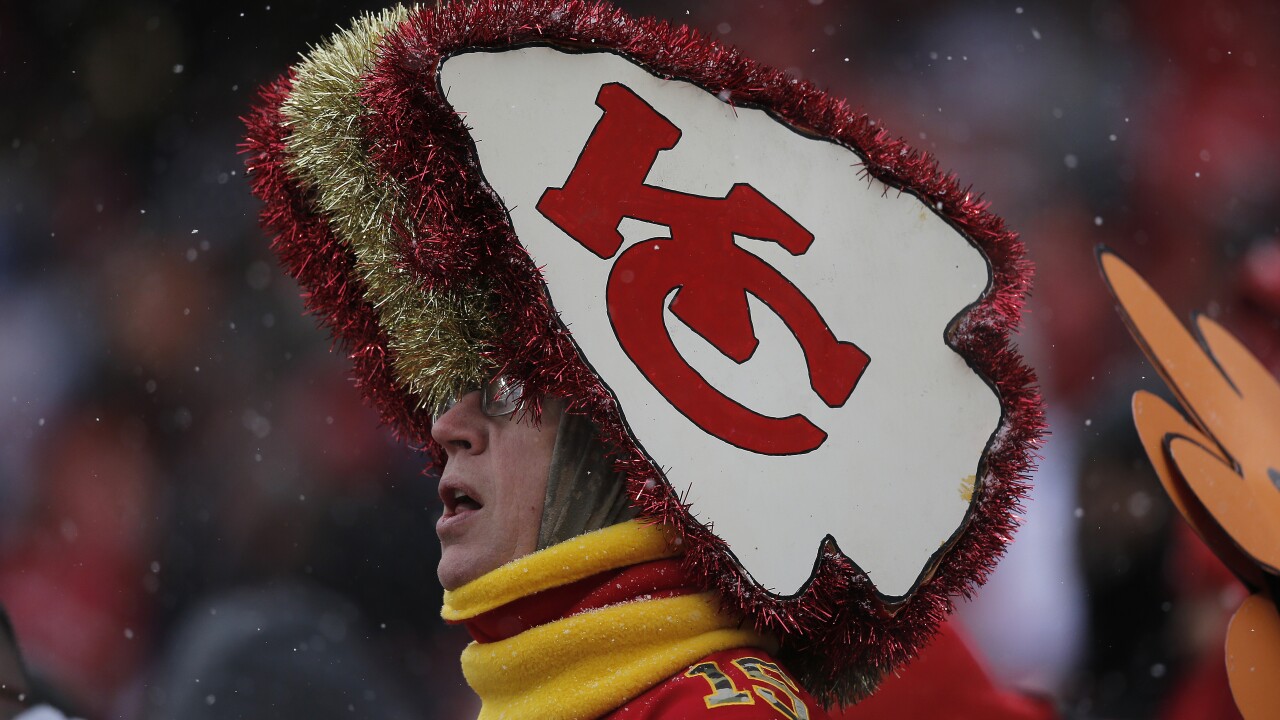 A pair of big plays in the third quarter spurred the Kansas City Chiefs to a win Sunday over division rival Los Angeles Chargers.

And thanks to a Miami Dolphins win over the New England Patriots, the Chiefs earned a no. 2 seed in the AFC Playoffs. They’ll host a division-round game Jan. 11-12.

After falling behind 14-10 early in the third quarter thanks to an uncharacteristic interception by Chiefs quarterback Patrick Mahomes, the Chiefs seized back the lead thanks to a 104-yard kickoff return from Mecole Hardman.

An 84-yard rushing touchdown moments later from running back Damien Williams extended the Chiefs lead to 24-14.

A Chargers touchdown late in the fourth quarter brought the score to 24-21, but the Chiefs were able to hold the Chargers off in the final minutes.

With the win, the Chiefs finished the year with a 12-4 record, including a perfect 6-0 against AFC West opponents.

UPDATE, 1:38 p.m. | Following the Mahomes interception, the Chargers cashed in and have taken a 14-10 lead.

UPDATE, 1:36 p.m. | On the opening drive of the 2nd half, Patrick Mahomes throws interception deep in Chiefs territory.

UPDATE, 1:20 p.m. | Chiefs' Tyrann Mathieu brings down key interception to keep Chargers off the board. Chiefs lead 10-7 at the half.

UPDATE, 12:55 p.m. | Chiefs starting safety Juan Thornhill has been ruled out for the remainder of the game following a leg injury.

UPDATE, 12:40 p.m. | The Chargers connect on a touchdown, and an extra point gives them a 7-3 lead early in the second quarter. Chiefs safety Juan Thornhill injured on the play. Thornhill was carted off the field from the Chiefs bench.

UPDATE, 12:24 p.m. | Thanks to a pair of Chargers penalties, the Chiefs were able to move the ball. A Harrison Butker 40-yard field goal gives the Chiefs an early 3-0 lead.

UPDATE, 12:02 p.m. | The Chiefs and Chargers are underway from Arrowhead Stadium.

UPDATE, 10:30 a.m. | We’re 90 minutes from kickoff. The Chiefs and Chargers have announced their final inactive reports.

EARLIER | The playoff scenarios are relatively simple for the red-hot Chiefs ahead of the AFC playoffs, which begin next weekend.

It’s possible that Kansas City, which wraps up the regular season against the Los Angeles Chargers at noon Sunday at Arrowhead Stadium, can avoid having to play next weekend.

That would require the Miami Dolphins to stun the New England Patriots at home Sunday.

But if the ‘Fins rise up and the Chiefs vanquish the Chargers, it would mean a bye week and a home game in the AFC Divisional round for quarterback Patrick Mahomes and company.

Assuming the Pats dominate as expected, Kansas City can get the No. 3 with a win or a Houston Texans loss.

Under that scenario, the Tennessee Titans are the most likely opponent in next weekend’s AFC Wild Card round.

Coach Mike Vrabel’s squad ran over the Chiefs in the second half of a 35-32 shocker two months ago in Nashville, Tennessee.

Kansas City fans remain traumatized by a second-half meltdown in the 2017 AFC Wild Card round against the Titans, when a 21-3 halftime lead vanished amid missed calls and injuries.

The haunting 22-21 loss may come up a time or two around the City of Fountains if that matchup becomes reality, but Chiefs fans would do well to remember two words — Patrick Mahomes.

The Titans currently sit in the No. 6 spot in the AFC and can clinch a postseason berth with a win at Houston. The game kicks off at 3:25 p.m., so the Texans will know — based on the Chiefs’ result — if they have a chance to move up to the No. 3 seed or are locked into the No. 4 seed.

Houston’s only chance at the No. 3 seed is to beat Tennessee on the heels of a Chiefs loss.

The Pittsburgh Steelers and Oakland Raiders remain alive in the playoff hunt should the Titans stumble.

Get yourself ready for the Chargers game by enjoying the “4th & 1” podcast, which includes an appearance from a very special guest. (Hint: it’s Kansas City, Missouri, Mayor Quinton Lucas, and it's a lot of fun!)

The Chiefs got some bad news this week when veteran running back Spencer Ware, who was re-signed Darrel Williams went down for the season, was placed on injured reserve.

Ware was the team’s best running back in pass protection and had solidified the position in recent weeks.

The rest of the injury news isn’t terrible, considering its Week 17.

#Chiefs Injury Report vs the Chargers for Friday pic.twitter.com/FVENl4o7gj

Hear from Mahomes, who finished third in the AP Male Athlete of the Year voting, and Chiefs coach Andy Reid ahead of the Chargers game:

Be sure to check out Tyrann Mathieu’s press conference, if you missed it, as well:

And for a really deep dive, listen to the Chiefs’ coordinators in all three phases: