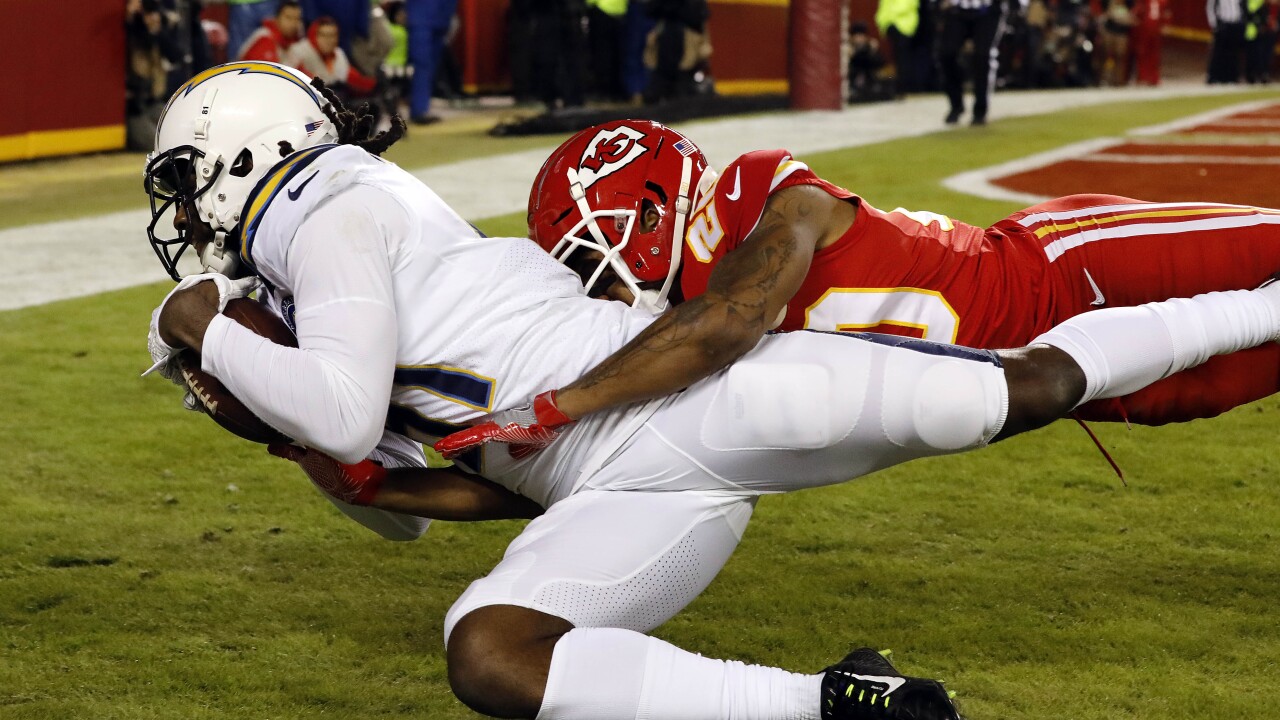 All it took was feverish fourth-quarter comeback, a questionable pass-interference call, a tense video review of the final touchdown and the gutsy decision to try a 2-point conversion.

Justin Jackson's touchdown run with a couple minutes left gave the Chargers a chance. They quickly got the ball back from Patrick Mahomes and the NFL's highest-scoring offense, and Rivers led a tense final drive that included a fourth-down dart to Travis Benjamin and that crucial penalty on Kendall Fuller in the back of the end zone.

The flag gave the Chargers the ball at the 1, and Rivers found Mike Williams along the sideline on the very next play. And when his TD catch with 8 seconds left was confirmed, coach Anthony Lynn sent his offense back onto the field to end five years' worth of frustration.

Williams found himself alone in the end zone to secure the 2-point conversion.

Not only did the Chargers (11-3) clinch a playoff berth, they forged a first-place tie with the Chiefs (11-3) in the AFC West while ending a nine-game losing streak to their longtime division rivals.

Rivers threw for 313 yards and two touchdowns, though he also tossed a pair of interceptions, and Williams had seven catches for 76 yards and two scores while adding another on the ground.

Jackson ran for 58 yards and a touchdown in place of the injured Melvin Gordon.

Mahomes was held to just 243 yards and two touchdowns for Kansas City, and his inability to pick up a first down in the closing minutes proved costly. The Chiefs forced the Chargers to burn two timeouts on their last drive, but Mahomes was sacked by Isaac Rochell and Kansas City had to punt.

The Chiefs never got the ball back on offense.

Hyped by the return of star safety Eric Berry, it looked for a while as if the Chiefs would simply resume their vexation of Rivers at Arrowhead Stadium. Steven Nelson leaped to snag a jump ball for an interception on the second play of the game, and Rivers tossed another just before halftime.

Mahomes and Co. took advantage of their early momentum.

Kansas City breezed downfield after Nelson's interception, and the young MVP candidate threw a dart to Demarcus Robinson — while in the grasp of Chargers safety Adrian Phillips — for a 7-0 lead.

Then after a punt, Darrel Williams took a screen pass for his first career touchdown.

The Chargers finally reached the end zone in the second quarter, when Mike Williams caught a short TD pass. But it came moments after wide receiver Keenan Allen hurt his hip while trying to make a leaping grab in the corner of the end zone — he briefly returned before sitting out the rest of the game.

Mike Williams continued to pick up the slack the rest of the game.

After the Chiefs pushed their lead to 21-7 on Damien Williams' touchdown run, the Chargers' big, rangy wide receiver answered with a 19-yard end-around for a score. And when then Chiefs went on another methodical scoring drive to take a 28-14 lead with just over 8 minutes left in the game, Williams helped the Chargers head the other way for another answering touchdown to stay in the game.

The Chiefs added TE Tony Gonzalez to their Hall of Fame at halftime. The six-time All-Pro played his first 12 seasons with the Chiefs before finishing his career in Atlanta. His name was unveiled next to that of WR Carlos Carson on the ring of honor inside Arrowhead Stadium.

Chargers: Allen received treatment on the sideline after nearly making his spectacular TD catch, and he returned briefly before slowly walking off. He left for the locker room and did not return.

Chargers: Return home for a primetime game against the Ravens on Dec. 22.