Chiefs prepare to head south of the border 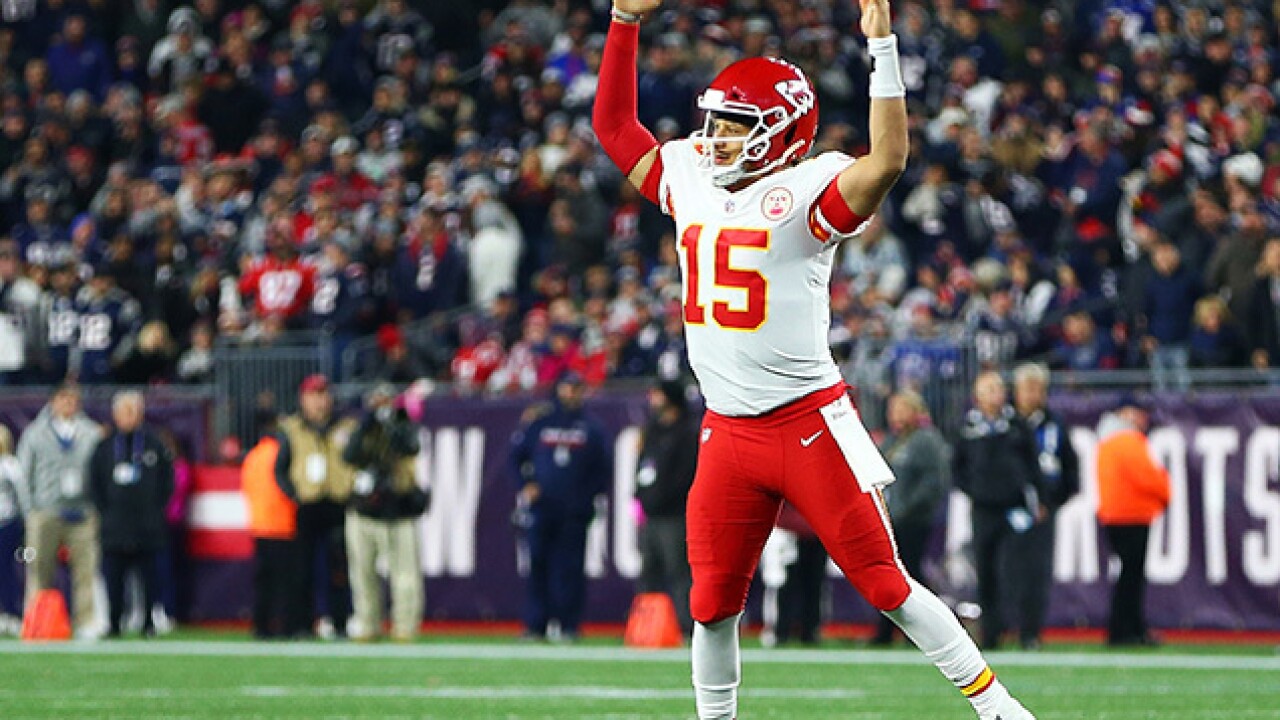 Copyright 2018 Scripps Media, Inc. All rights reserved. This material may not be published, broadcast, rewritten, or redistributed.
Adam Glanzman/Getty Images
<p>Kansas City Chiefs quarterback Patrick Mahomes celebrated a touchdown in the fourth quarter against the New England Patriots on Oct. 14, 2018, at Gillette Stadium in Foxborough, Massachusetts.</p>

The Chiefs (9-1) scored a 26-14 home victory against the Arizona Cardinals. The Los Angeles Rams (9-1) earned a tough comeback home win over Seattle. It's now time to turn the focus to a mammoth Monday Night Football showdown in Mexico City between the two best teams in the league according to their records.

Some are calling this game a potential Super Bowl preview. Both teams have the best record in their respective conferences. Both teams feature the best offenses in the league. The over-under for the game set an all-time NFL record with 63.5.

And, both teams will have former players on the opposing sidelines.

Wide Receiver Sammy Watkins played with the Rams last season before being signed by the Chiefs in March. Additionally, current Rams safety and former Chief Marcus Peters was traded to Los Angeles during the offseason. He'll have the opportunity to defend the speedy Tyreek Hill. But, while both players have practiced against each other in the past, head coach Andy Reid doesn't think one player has an advantage over the other.

"Marcus is a good player. He is a pro bowl player. I think there's a mutual respect there between the two because they've played against each other," Reid said at his weekly Monday press conference. "I don't know if there is an advantage one way or the other necessarily. It will be fun to watch, I think, good competition."

While some players may be familiar with each other, these two teams are not. Head-to-head, they have only played 11 total games with the Chiefs leading the all-time series 7-4. Additionally, Kansas City has won five consecutive matchups against the Rams. However, they haven't played each other since October 2014 when the Rams were in St. Louis. The Chiefs won that game at Arrowhead Stadium 34-7. And, they generally play each other once every four years.

Here's a listing of all of the Chiefs games over the years against the Rams:

In those 11 matchups, none of those games have been played out of the country and above 1,000 feet of elevation. Los Angeles and Kansas City sit at 285 and 909 feet respectively. Denver boasts the highest elevation of any NFL city at exactly one mile high or 5,280 feet above sea level.

Aztec Stadium in Mexico City sits at a whopping 7,503 feet above sea level.

That posed a concern for both teams. According to various reports, both the Chiefs and Rams petitioned the NFL to have the game before the Mexico City trip to be played at Denver. The NFL reportedly denied both requests citing not wanting to give either team an unfair advantage. Despite team concerns, Andy Reid painted a different picture when asked if he was concerned about the altitude.

"No, we're okay. We are okay. We are not that concerned about that. We are just going to get ourselves ready to go play in front of great fans and against a really good football team," Reid said.