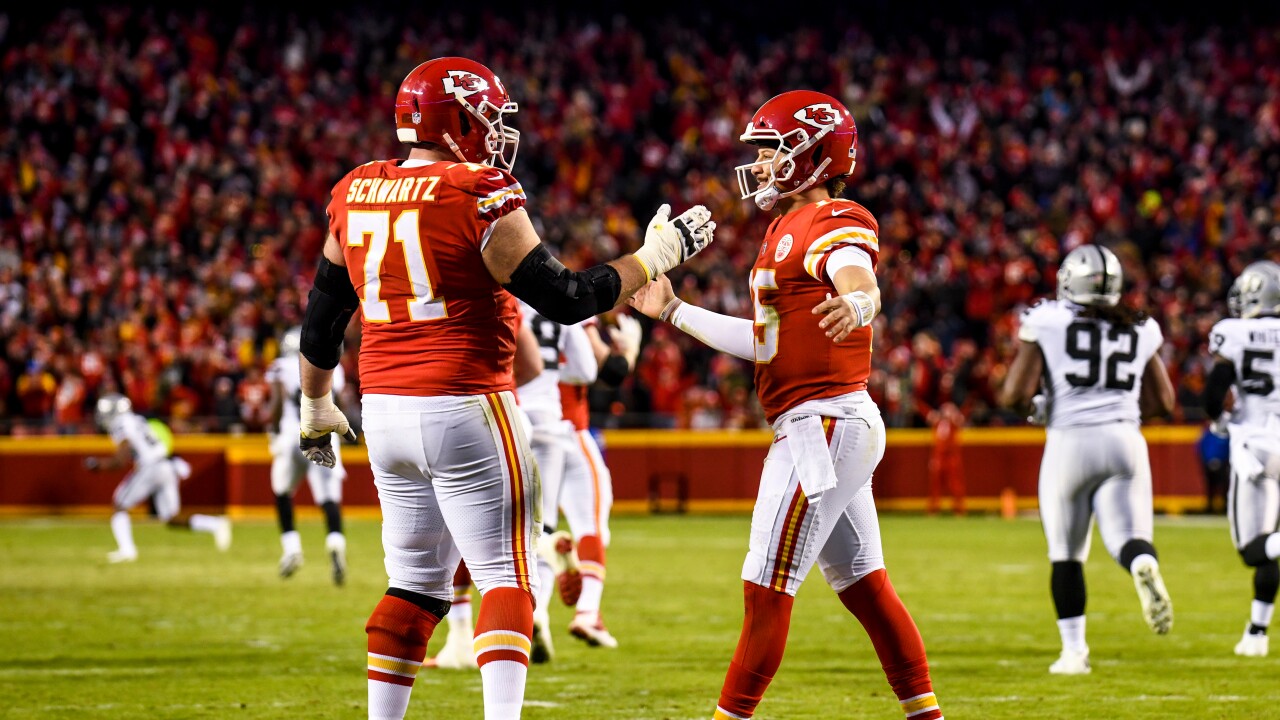 Jason Hanna/Getty Images
KANSAS CITY, MO - DECEMBER 30: Patrick Mahomes #15 of the Kansas City Chiefs is congratulated by teammate Mitchell Schwartz #71 after throwing his fiftieth touchdown of the season during the third quarter of the game against the Oakland Raiders at Arrowhead Stadium on December 30, 2018 in Kansas City, Missouri. (Photo by Jason Hanna/Getty Images)

KANSAS CITY, Mo. — The Kansas City Chiefs signed All-Pro offensive tackle Mitchell Schwartz to a one-year extension Wednesday that could keep him with the AFC West champions through the 2021 season.

The 30-year-old Schwartz has not missed a snap in his seven-year career, a streak that began with four seasons in Cleveland and has continued the past three seasons in Kansas City.

Schwartz signed a $33 million, five-year deal with the Chiefs in 2016.

During the second day of Chiefs mandatory minicamp, center Austin Reiter described Schwartz as a second quarterback on the field.

“To have a guy that’s played over 100 games and is that smart with what he can see, it’s almost like having another quarterback out there,” said Reiter. “He’ll be yelling at me and we can hear Pat and if we got three people on the same page with protections and we get all five of us, or six if we got a back or tight end in there, like I said, it’s like another quarterback out there. It’s awesome.”

Not only do the Chiefs have a great center in Schwartz, but a pretty good pitmaster.

"It’s the real deal,” said Rieter when he was asked about Schwartz’s grilling skills. “He cooked us a brisket a couple of times, he’s done hamburgers, he’s had some steaks. I think my favorite part was the steaks he cooked one night. Those were really good.”

Our Mick Shaffer has even sampled Schwartz’s cooking.

The Chiefs wrap up their three-day mandatory minicamp on Thursday.