Chiefs have a blueprint to beat Chargers for 10th-straight game 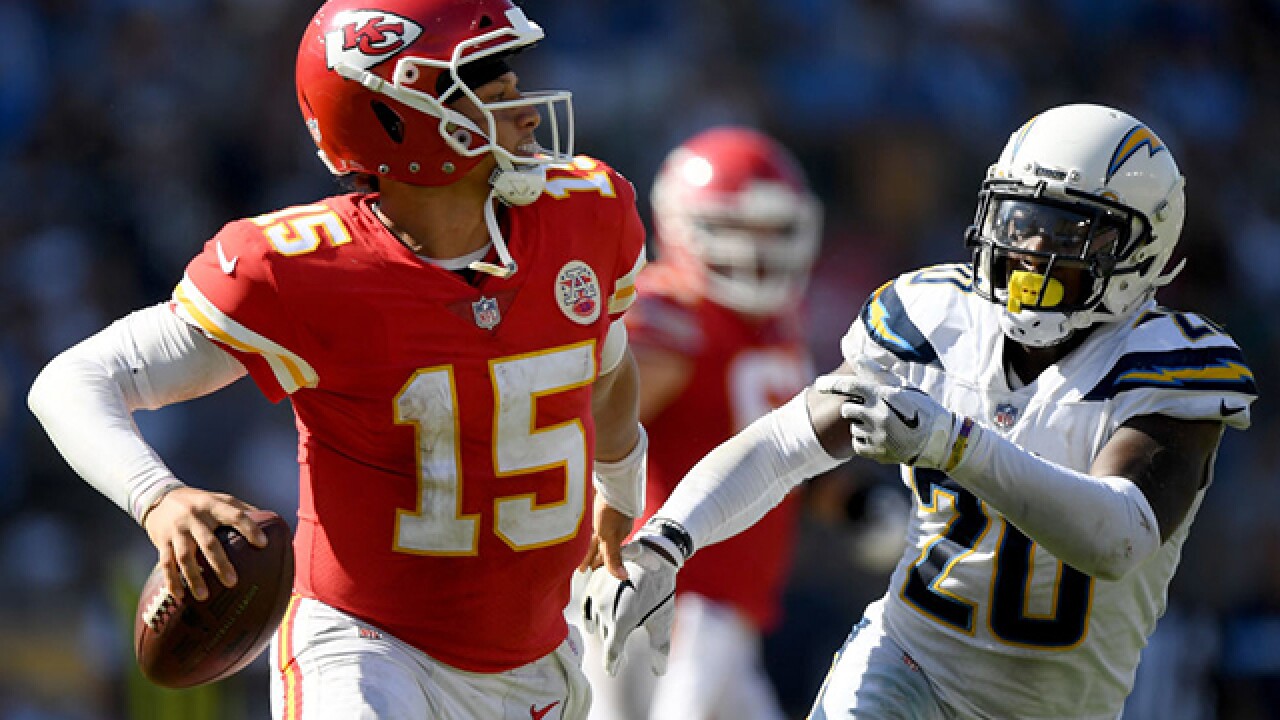 Harry How/Getty Images
CARSON, CA - SEPTEMBER 09: Patrick Mahomes #15 of the Kansas City Chiefs fends off the rush of Desmond King #20 of the Los Angeles Chargers during the fourth quarter in a 38-28 Chiefs win at StubHub Center on September 9, 2018 in Carson, California. (Photo by Harry How/Getty Images)

KANSAS CITY, Mo. — The Chiefs season has all been for this moment.

If Kansas City wins on Thursday night, they will capture their third consecutive AFC West crown and guarantee themselves a first round bye with no worse than a 2-seed finish the season. The wins stacked up earlier this season have put them into a position of power.

Here are the key points to capture their 12th victory of the season.

LISTEN: The 4th and 1 Chiefs podcast previews Thursday's game against the Chargers

Get Rivers on the run or off his spot
Philip Rivers is an accurate quarterback when he is able to catch the snap, stand on his spot and let the ball fly. At this point in the season, he can make any throw in those conditions. If the pocket is collapsed in on him or if he has to take off running, the play begins to deteriorate each second after. Rivers will throw the ball away if on the run or lift up an interception if the pocket collapses. Rivers also likes to hop forward twice when resetting his feet for an accurate throw. The Chiefs can make it a long day if they can force Rivers into those circumstances.

Stretch Jackson out
The Chargers might be without their star running back in Melvin Gordon and Austin Ekeler appears to be injured as well. That would likely put rookies Justin Jackson and Detrez Newsome in the featured roles. Jackson is slower when he is stretched sideline to sideline. He lacks the burst to beat defenders to the end. He is at his best when he is moving forward and picking up speed. Newsome has some burst to the edge but appears to be slower moving forward.

Delays, draws, lead, trap and pitches
The Chiefs offense will have opportunities to run on the Chargers. The rush likes to get upfield quicker than they should. Delayed runs and draws are very effective against their aggressive attack. Lead plays are there for the taking if the back is fast enough and spaced back eight yards off the ball. Double the point of attack and there is a chance to gash the heart of the defense. Quick-hitting trap plays are there and pitches off the edge that can seal off the rushers can be had as well.

Space them out and hit the windows quick
Andy Reid, Eric Bieniemy and Patrick Mahomes have an opportunity to stretch the Chargers’ coverage. They like to run variations of zone. Last time Mahomes played them, he was able to find some of the voids and effectively turn them into big gains. The Chargers leave a lot of opportunities in their short and intermediate coverage to exploit with route combinations that put the defense in a bind. The Chiefs can also utilize bootlegs and rollouts to get Mahomes into a rhythm when needed.

Bonus point
Desmond King is arguably the best returner the Chiefs have faced this season and it would be wise to use a lot of hang time or kick away from him. Right tackle Sam Tevi had close to what appeared to be nine false starts in their road game at Pittsburgh. It will be worth watching based on the Arrowhead atmosphere.

After Thursday night, the Chiefs will hopefully be celebrating their 10th consecutive win over the Chargers, third consecutive AFC West title and a home playoff game after a week of rest.

Nick Jacobs can be found on Twitter: @Jacobs71 and can also be heard on the 4th and 1 podcast brought to you by 41 Action News. 4th and 1 is available on iTunes, Google Play and TuneIn. You can check out all the 41 Action News podcasts here.