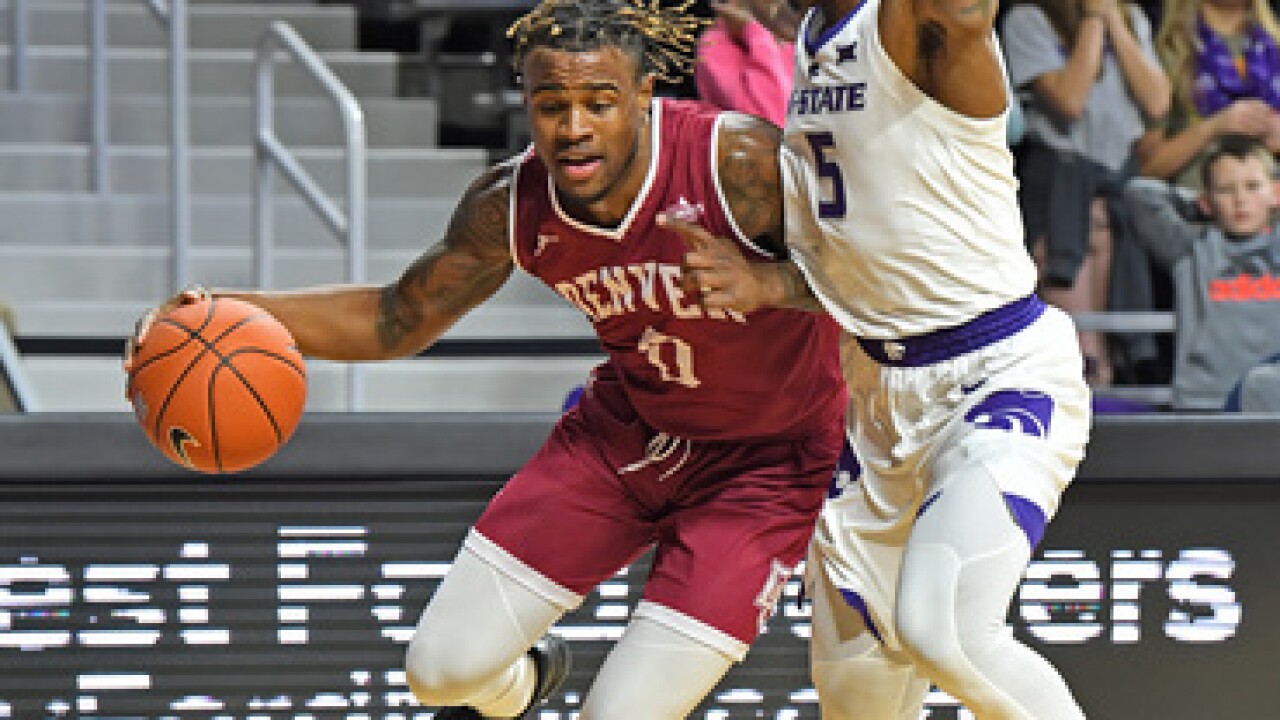 Copyright 2018 Scripps Media, Inc. All rights reserved. This material may not be published, broadcast, rewritten, or redistributed.
Peter Aiken
<p>MANHATTAN, KS - NOVEMBER 12: Ade Murkey #0 of the Denver Pioneers drives with the ball against Barry Brown Jr. #5 of the Kansas State Wildcats during the first half on November 12, 2018 at Bramlage Coliseum in Manhattan, Kansas. (Photo by Peter Aiken/Getty Images)</p>

Barry Brown scored 15 of his 25 points in the second half and No. 12 Kansas State held off pesky Denver 64-56 on Monday night.

Dean Wade and Xavier Sneed each had 12 points for the Wildcats (2-0), who have won 25 consecutive home games against nonconference opponents. Wade added 16 rebounds and four assists.

Kansas State pulled this one out despite shooting 38 percent from the field, including 6 of 27 (22 percent) from 3-point range. The Wildcats were terrible at the foul line, too, going 12 for 27.

But the Pioneers were hurt by 17 turnovers, and they forced only nine.

Sneed got the Wildcats going in the first 10 minutes as he scored seven of the first nine points for Kansas State.

Denver held a 12-11 lead with nine minutes left in the first half before Kansas State went on a 7-0 run highlighted by Brown's dunk. The Pioneers kept the game close with a 7-0 spurt to end the half and trailed 31-28 going into the locker room.

BIG PICTURE
Denver showed it they can compete with a ranked team. The Pioneers will need to play even better in a month when they face No. 3 Gonzaga on the road.

Kansas State struggled with a low-major program for the second straight game, a bit concerning for a team hoping to contend for a Big 12 title this season. The Wildcats will play more lower-tier teams in the Paradise Jam, but those games won't be in the comfort of Bramlage Coliseum.

UP NEXT
Denver gears up for a home game against Abilene Christian on Thursday night.

Kansas State travels to the U.S. Virgin Islands to participate in the Paradise Jam, where the Wildcats will play Eastern Kentucky in the first round Friday night. A potential matchup with former Big 12 foe Missouri would be Monday night in the championship game if both teams win their first two games in the tournament.