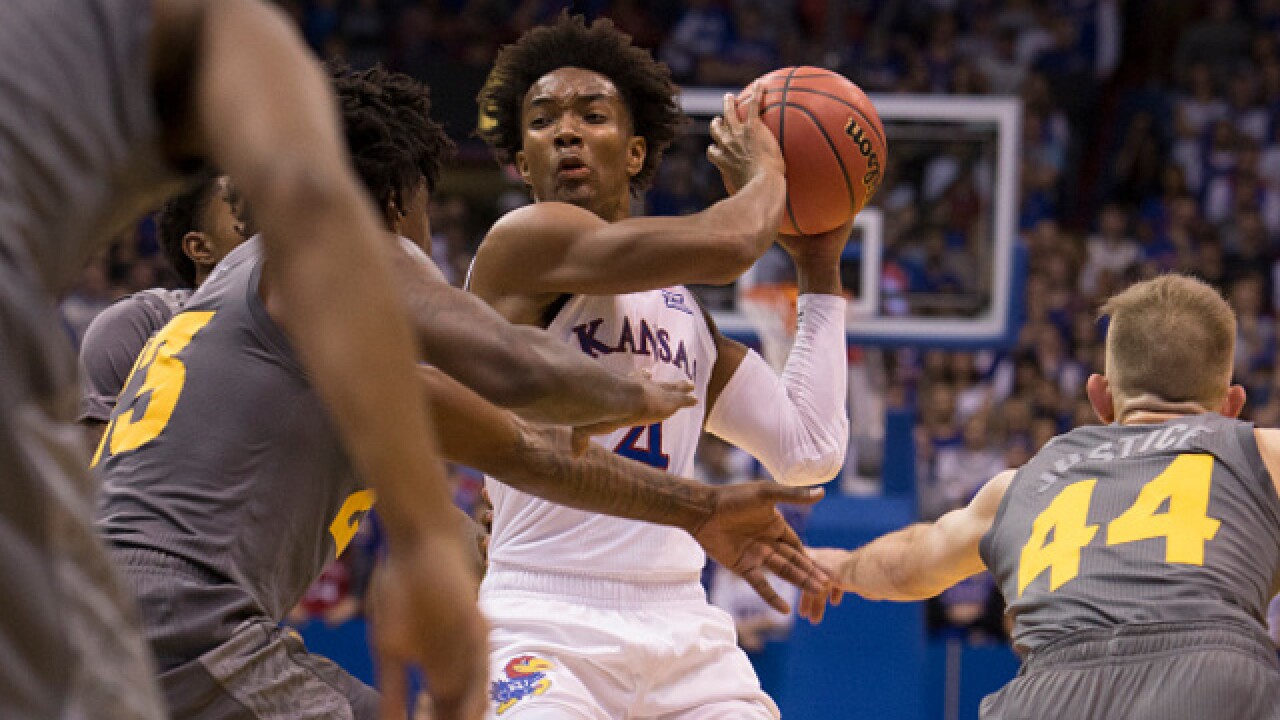 Copyright 2017 Scripps Media, Inc. All rights reserved. This material may not be published, broadcast, rewritten, or redistributed.
Kyle Rivas
<p>LAWRENCE, KS - DECEMBER 10: Devonte' Graham #4 of the Kansas Jayhawks gets cut off by the Arizona State Sun Devils defense during the game at Allen Fieldhouse on December 10, 2017 in Lawrence, Kansas. (Photo by Kyle Rivas/Getty Images)</p>

The is the second honor Graham picked up on the day as he was named one of 10 candidates for the Bob Cousy Point Guard of the Year Award early Monday afternoon. Graham is vying to become the second straight Jayhawk to win the Cousy and Wooden awards as Frank Mason III was the 2017 recipient of both honors.

Chosen by a poll of national college basketball experts based on their performances during the first half of the 2017-18 season, the list comprises of 20 student-athletes who are currently the front-runners for the John R. Wooden Award and the 10-member Wooden All America Team.

The Big 12 leads all conferences with five selections; followed by the Big East and Big Ten with four apiece, the Pac-12 with three; the ACC with two; and the SEC and WCC with one selection apiece.

Players not appearing on this list are still eligible for the National Ballot, which will be announced in early March and will consist of 15 top players. Prior to being listed on the National Ballot, each player must be certified by their university to meet the qualifications for the Award, including: candidates must be a full-time student making progress toward graduation and have a cumulative 2.00 grade point average since enrolling in their school; candidates must exhibit strength of character, both on and off the court; candidates should contribute to team effort; candidates must excel in both offense and defense; and candidates should be considered based on their performance over the course of the entire season. Players not listed on the National Ballot will no longer be eligible for the Wooden Award nor the John R. Wooden Award All America Team. Voting begins at the end of the season, and voters, consisting of 1,000 members of the national college basketball media, will take into account the opening rounds of the NCAA Tournament.