Duke leapfrogs Kansas for No. 1 in latest AP Top 25 poll 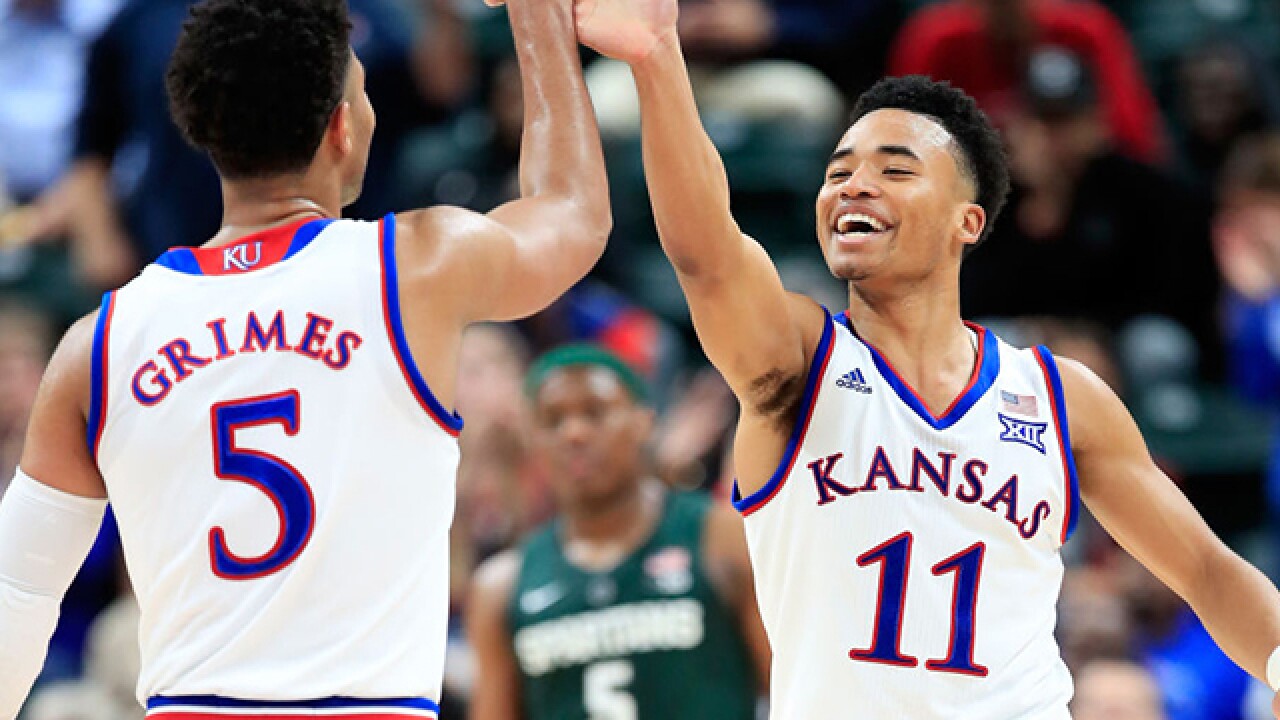 Copyright 2018 Scripps Media, Inc. All rights reserved. This material may not be published, broadcast, rewritten, or redistributed.
Andy Lyons
<p>INDIANAPOLIS, IN - NOVEMBER 06: Devon Dotson #11 of the Kansas Jayhawks celebrates with Quentin Grimes #5 against the Michigan State Spartans during the State Farm Champions Classic at Bankers Life Fieldhouse on November 6, 2018 in Indianapolis, Indiana. (Photo by Andy Lyons/Getty Images)</p>

NEW YORK (AP) — Duke has supplanted Kansas atop the new AP Top 25 poll after its dominating win against Kentucky, giving the Blue Devils a record number of appearances at No. 1.

The Blue Devils jumped from fourth to first in Monday's first regular-season poll. That allowed Duke to set a record with its 135th week at No. 1, breaking a tie with UCLA for most all-time. It also marked the third straight season that Duke has spent at least one week at No. 1.

Duke (2-0) claimed 48 of 65 first-place votes after beating then-No. 2 Kentucky by 34 points in the Champions Classic to open the season, the program's most lopsided win against a top-5 opponent. The Blue Devils followed that with a win Sunday against Army at Cameron Indoor Stadium.

Duke's Kentucky win was impressive enough to bump the preseason No. 1 Jayhawks, who fell to No. 2 despite a quality win of their own against then-No. 10 Michigan State in the Champions Classic's first game. Kansas went from having 37 first-place votes in the preseason to just 14 this week.

Gonzaga stayed at No. 3, followed by Virginia and Tennessee each climbing a spot to round out the top 5. Nevada, North Carolina, reigning national champion Villanova and Auburn were next, while Kentucky slid eight spots to No. 10.

There were two new teams in the poll with No. 24 Marquette and No. 25 Buffalo, which made the program's first AP Top 25 appearance after a win at then-No. 13 West Virginia. The Mountaineers fell out of the poll after the loss.