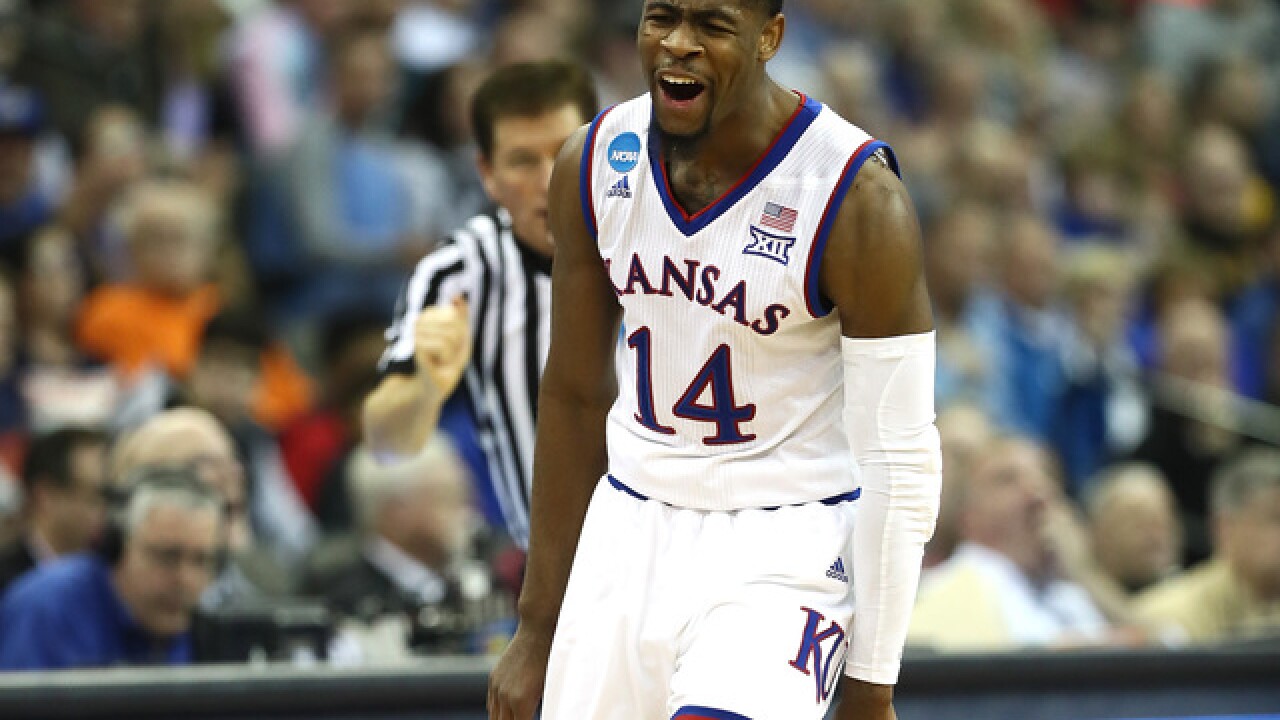 Image copyright 2018 Getty Images. All rights reserved. This material may not be published, broadcast, rewritten, or redistributed.
Jamie Squire
<p>OMAHA, NE - MARCH 23: Malik Newman #14 of the Kansas Jayhawks reacts against the Clemson Tigers during the second half in the 2018 NCAA Men's Basketball Tournament Midwest Regional at CenturyLink Center on March 23, 2018 in Omaha, Nebraska. (Photo by Jamie Squire/Getty Images)</p>

Top-seeded Kansas brought at least a temporary halt to the insanity this March, withstanding a wild comeback from fifth-seeded Clemson for a too-close-for-comfort, 80-76 victory on Friday.

Malik Newman led the Jayhawks (30-7) with 17 points in a one-time runaway that got much closer and, quite frankly, won't mean much if KU can't finish the job in the regional final Sunday.

For the third straight year as a No. 1 seed, KU made its way through the Sweet 16. Getting to the Final Four has been a different story — and the Jayhawks are on the doorstep once again.

As a top seed the last two seasons, Kansas made it through the regional semifinals, only to flop a game shy of the Final Four both times. In fact, this is the sixth time Bill Self's team has been seeded first since winning it all in 2008; the Jayhawks haven't made the Final Four one of those times.

Clemson trailed 62-42 midway through the first half, but climbed to within six with 2:27 left. But thanks to Devonte' Graham's offensive rebound with 1:57 left, the Jayhawks ran almost a minute off the clock. The Tigers got the ball with a chance to cut it to a one-possession game, but misfired on back-to-back 3s. From there, Kansas overcame a dogged Clemson press just long enough to ensure that the Tigers couldn't pull any closer until the final buzzer. Kansas came into the game a 4 ½-point favorite.

Gabe DeVoe had a career-high 31 for Clemson (25-10), which couldn't replicate the magic it showed in beating Auburn by 31 to reach its first Sweet 16 in 21 years.

Clemson had scored five straight points to cut KU's lead to 35-27 when Elijah Thomas, after a review, was called for a flagrant foul. Silvio De Sousa knocked down the free throws, Lagerald Vick buried a 3 and Kansas cruised into halftime ahead 40-27. Vick, Newman and Graham then opened the second half with 3s to extend the lead to 20.

For Kansas, it's three down, three to go for a program that expects to compete for a national championship year in and year out. One of the most encouraging things about KU's takedown of Clemson was that it jumped ahead by 13 at halftime despite a 1-for-7 start by Graham, the Big 12 player of the year. Udoka Azubuike looked strong in his first start of the tournament with 14 points and 11 rebounds.

Clemson: What a wild 12 months it was for coach Brad Brownell. He entered the season on the hot seat after six straight seasons without even making the NCAA Tournament, but the Tigers reached the regional semifinals for the first time since 1997 even after losing Donte Grantham, arguably their best player. The big question next is whether 2017-18 will prove to be a fluke or the start of something big in the Upstate. The school has spent the money it needed to spend on facilities to become a basketball school — but will it ever get out of the shadow cast by Dabo Swinney's football team?